Subtitle: Pastor Mark is a Spurgeon for our time.

Most people realize by now that Mark Driscoll and perhaps most megachurch pastors use research help in order to write their books, blogs and columns. Even though the celebrity pastor’s name is on the label, several other writers have been involved in the finished product. When Driscoll issued a statement about plagiarism in his study guide on I & II Peter, he faulted his “content development process.” To many, the statement, which included the famous phrase “mistakes were made,” appeared to pass the buck to those unnamed researchers and writers employed in the development of content.

I have obtained a 2013 proposal for an expansion of the content management system at Mars Hill. I am pretty sure that very little of this is in place now after the recent round of layoffs. In fact, internal sources tell me that Mars Hill Music and The Resurgence is essentially unstaffed. Since it is a proposal, it is not clear how much of this came into being, but it provides an interesting insight into some of the stories which have emerged over the past year.  Here is the front page which provides the rationale for spending time and money promoting Mark Driscoll’s written works. 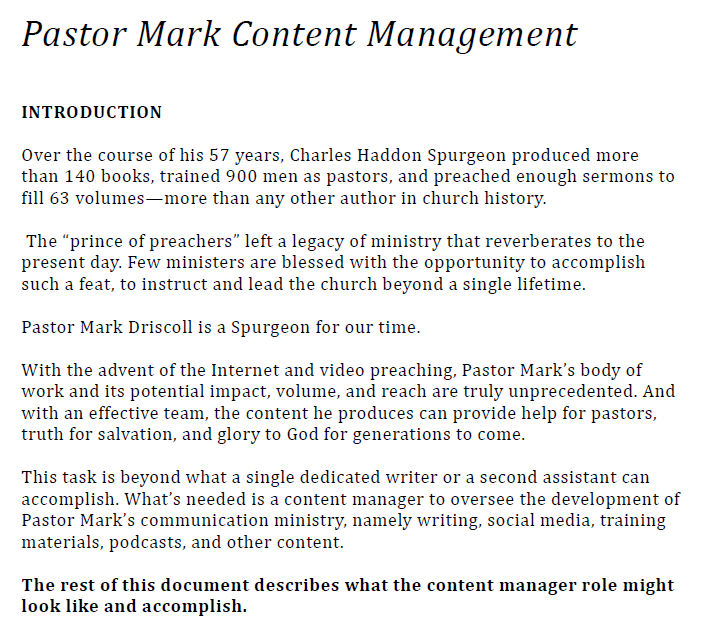 I can imagine that having a person dedicated to your publishing business and advancing a personal brand would be a worthy undertaking for an individual who makes his/her living from speaking, writing, and commenting. In other words, if your personal business is growing, surely you need a person who can help manage various projects. What is interesting and may be specific to the megachurch environment is that the church donations and tithes pay for this. Here is the financial aspect of the proposal.

Budget appears to call for well over $100k once the producer is hired. Some of these expenses were already in place. When the plagiarism scandal first broke in November 2013, Docent Research was in the spotlight for awhile because Driscoll initially implied the researchers were responsible. Thus, Mars Hill members were paying for research which ended up in Mark Driscoll’s books. The royalties from those books eventually ended up with Driscoll.

This information raises questions about how much church funds should help to establish an individual’s ministry. I am not saying I have the answer; perhaps $120k+ is fine given Mars Hill Church’s size. However, even on executive elder — Sutton Turner — expressed reservations. In his 2012 memo to his fellow executive elders, Sutton Turner complained about pastors using the church to do this. It is hard to see the content management system as anything but an advancement of Driscoll’s “communications ministry.” I’ll close with two quotes from Sutton Turner in 2012:

Many times these personal ministries are done during staff time and using church resources. This actually encouraged when I first came on staff as it was explained to me that staff was able to take MHC time to do consulting work to supplement their income. At the very highest levels of the organization this was taking place and reproduced throughout the organization. So as a result, all staff members saw this as acceptable and now the established culture within Mars Hill Church.

It is my belief that the reason we have such poor giving by our Church is the lack of stewardship in the Church staff. Churches with excellent stewardship see greater giving because people know that every dollar they give will go towards the mission of the Church. It is very clear this has not been the case at Mars Hill Church.