After Mars Hill Church released a statement regarding Trial: 8 Witnesses From 1 & 2 Peter, questions were raised about the authorship of the guide. In the book, Driscoll is listed as author, along with former Mars Hill staffer Brad House. However, the statement issued by the church says that a “team of people, including a research assistant” were involved.
According to a document (surprise, it is now missing – for the document click here) on the Mars Hill website, The Resurgence, Docent Research Group consultant Justin Holcomb might better get the credit for the sections discussing the background of the books of 1 & 2 Peter. On page 143 (try here because Mars Hill removed the pdf) of the sermon series “battle plan,” this research note appears. 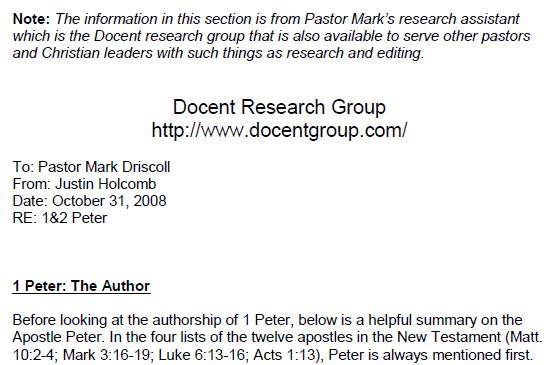 From pages 143-166, Holcomb presents what appears to be the basis for the text of the book that eventually became Trial: 8 Witnesses From 1 & 2 Peter. Thus, it appears that the original Mars Hill statement is mostly accurate but not revealing. Certain sections of the book are taken directly from this memo from Holcomb to Driscoll.
For instance, the sections which were identified by IVP as having been copied by Driscoll were themselves copied from the notes provided by Holcomb (see page 147 for example). The following information comes from page 147 of the memo from Holcomb to Driscoll:

First, Peter is described in Acts 4:13 as “unschooled”, and the style of Greek in which the letter is written is said to be too good for a Galilean fisherman to have used. Also, quotations are taken from the Septuagint (LXX), the Greek rather than the Hebrew version of the OT.
The style is, however, not so ‘educated‘ as some would like to make out and in places it is much more the language of ordinary people. There is evidence that in Peter‘s time Greek, as well as Aramaic, was spoken in Galilee, and as a fisherman living in Capernaum on one of the great trade routes he would have had to speak Greek regularly. The fact that his own brother‘s name, Andrew, is a Greek one suggests that from boyhood Peter would have grown up with this language. Some thirty years‘ work of evangelism and teaching in a church that contained an increasing proportion of Gentiles would have made him more fluent in Greek and prepared to quote the LXX as his Authorized Version‘.

Compare this to the text of Driscoll’s guide and the New Bible Commentary.

It appears the Holcomb quoted* the material from the New Bible Commentary and then Driscoll changed a few words and included it under his authorship. There are multiple instances of this practice throughout the memo. If one goes to the Docent Group’s website, the first video of endorsement one will see is of Mark Driscoll.
What started in late November with Janet Mefferd’s accusations of plagiarism against Mark Driscoll has morphed into broader concerns over authorship and use of research materials. This finding raises interesting questions about ghostwriting and the use of research in writing for publication. I am not aware of how wide spread this practice is but perhaps this story allows us a view behind a door not often opened.
UPDATE: This document and the Mars Hill statement about the plagiarism controversy make it appear that documentation is pretty lean in the research notes. However, a statement that Glenn Lucke, founder of the Docent Group, made to Andy Crouch at Christianity Today contradicts this impression. According to Crouch, Lucke told him that Docent’s “records show that Holcomb provided Mars Hill all the documentation needed to properly cite the IVP commentary.”
UPDATE (12/11/13) – After reading Lucke’s statement in the Christianity Today article, I went back to review again the material provided by Holcomb and Docent Group. I missed something the first time that I believe is significant. See the note below for an explanation.
*I changed this word from “borrowed” to “quoted” in the section above because there are quotes around the material starting just under the heading Who Wrote 1 Peter? also on page 147. Then the quote closes on page 148 with a footnote. However, the footnote is not to the New Bible Commentary but to a book by Peter Achtemeier. It is possible that the confusion is a matter of a mistake in this footnote which Driscoll just carried over to his book. In any case, with this new information, the focus seems to be more on Driscoll’s adopting this research report as his own work in the Trial book.
Note the quotes (in red circle) which begin this section: 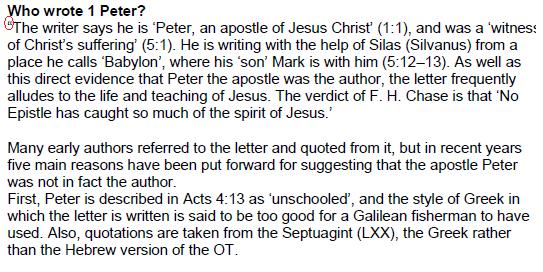