After reading the most recent post by my Fellow Patheos Blogger Pastor Mark Driscoll™ last night, a frequent reader of my blog informed me that the new post recycles lots of material from Driscoll’s book on doctrine. Indeed, there are several paragraphs in his Patheos post on evil in Las Vegas which first appeared in his book with Gerry Breshears titled Doctrine: What Christians Should Believe.  For instance, Driscoll wrote in his post:

The Bible uses a constellation of images to explain sin as everything from rebellion to folly, self-abuse, madness, treason, death, hatred, spiritual adultery, missing the mark, wandering from the path, idolatry, insanity, irrationality, pride, selfishness, blindness, deafness, a hard heart, a stiff neck, delusion, unreasonableness, and self-worship. Sin and evil are not rational or reasonable.

In his Doctrine book, he introduces a section on sin with the same paragraph: 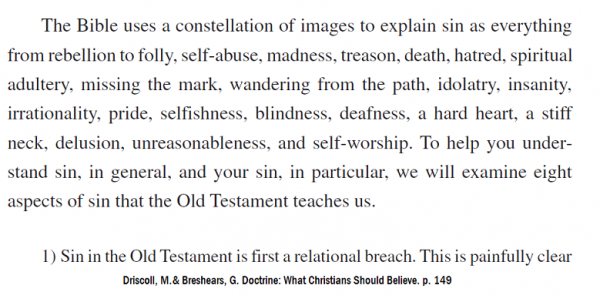 To Recycle or Not?

Recycling previously published material without citation is somewhat controversial in the world of writers. Journalist Jonah Lehrer had his career sidetracked over it. I discovered lots of it in Fellow Patheos Blogger Mark Driscoll’s™ books. However, in this case, I doubt many people will care that he is recycling previously published material at his new blog.
On the other hand, his co-author might care. Unless Gerry Breshears was not really very involved or just lent his name, the material claimed now by Driscoll might have been written by Breshears. Having a co-author is one reason why authors should cite the original source for recycled material.

Deja Vu All Over Again*

However, the same reader alerted me to something else I hadn’t seen before. It appears I found another “citation error” (some would call it plagiarism) in Doctrine (see this image for other such citation errors). On pages 149-150 of the 2010 book (see the page image here), Driscoll and Breshears wrote:

To help you understand sin, in general, and your sin, in particular, we will examine eight aspects of sin that the Old Testament teaches us.
1) Sin in the Old Testament is first a relational breach. This is painfully clear in Genesis 2–3 where, because of their sin, our first parents are separated from God and one another; they hide from God and one another, fear God, blame one another, and seek to cover their sin and shame while living their life apart from God.
2) Sin in the Old Testament is a social matter because shalom has been vandalized. This is evidenced by the litany of murder, perversion, drunkenness, the continual evil that precipitated the flood, and human attempts at an Edenic-like society without any regard for God that spring forth in Genesis 4–11.
3) Sin in the Old Testament is a covenantal rebellion against God and his authority. This is witnessed perhaps most clearly in Exodus 32 to 34, where following God’s liberation of his people, they dishonor, disregard, and disobey him by worshiping idols while God is giving them the Ten Commandments through their leader Moses.
4) Sin in the Old Testament is a legal transgression that results in guilt that necessitates punishment. One clear example is found in Deuteronomy 32, where in worshipful song Moses recollects some of the most treasonous behavior of God’s people and the price that had to be paid for justice to be maintained.
5) Sin in the Old Testament results in ritual uncleanness, pollution, and filth, marked by the use of words such as “filth,” “defiled,” “unclean,” and “whore.”18 Importantly, this defilement happens both to sinners and victims; we defile ourselves by our own sin and are defiled by others when they sin against us.
6) Sin in the Old Testament includes emotional pain such as shame and disgrace.19 This is first seen in Genesis 3, where our first parents sin and then hide in shame and disgrace, whereas prior to their sin they “were not ashamed.”20
7) Sin in the Old Testament is spoken of in historical terms as an accumulating burden whereby sin is piled up from one generation to the next.21 In this way, sin only worsens over time as people invent new ways to do evil more effectively.
8) Sin in the Old Testament is spoken of with the finality of death.22 Sin is deadly, and ends only in death. This is because when we sin and prefer created things to our creator God, we stop ruling over creation and are ruled by it so that in the end we lose and the dust wins.23
(The footnotes go to Bible verses not human authors as you can see in the page image)

Now read the same eight aspects written by Christopher Wright in a 2008 book about the atonement (Scroll down to Chapter Four “Atonement in the Old Testament” and read the first four pages of that chapter – See the page images for the relevant parts of Wright’s chapter here as well: one, two)

The eight aspects of sin described by Wright ended up in Driscoll’s book without citation. The explanations were gently reworded but reflect the same classification and meaning as Wright’s two years earlier. Some of the same key words, phrases, and Bible passages also remain used as Wright did, e.g., Adam and Eve, shalom, Exodus 32-34, shame and disgrace, accumulating burden, etc.  (See also this side by side comparison.)
It was as if I was transported back to 2014.

*”Deja vu all over again” is often attributed to Yogi Berra.