The day after he posted the video, he removed it from his Wallbuilders website and Facebook page. He has never addressed why the video was up for a day and then gone. 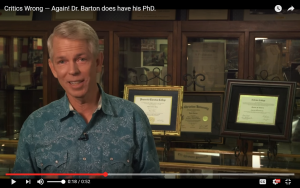 Barton ridiculed progressives for disbelieving his claim to have an earned doctorate. Then all of a sudden the video was removed and he stopped talking about his doctorate. None of the people who rely on his work apparently care that he claimed to have an earned doctorate when in fact it came from diploma mill Life Christian University. The claim just vanished as if it never happened.

Will Barton ever address his claims?

For the rest of the story, see these posts.