The second day of the Trump presidency was marked by falsehoods from the press secretary Sean Spicer about how many people came to DC to watch the Inauguration. Spicer said the event was the most watched ever despite the fact that photos comparing Obama’s inauguration in 2009 with this one clearly showed more people at Obama’s. This morning Kellyanne Conway called Spicer’s words “alternative facts” rather than lies.
Also this morning, President Trump tweeted that he got 11 million more viewers than Obama did in 2013.
It is amazing that Trump’s first couple of days have featured controversy over how many people watched the event. There is one metric where Trump wins – ego.
On the viewers, the reports I have seen give Trump 30.6 million viewers for the inauguration which place the event 5th since Nixon’s in 1969. However, correcting for greater population and more possible households, Trump’s inauguration ratings place him 9th out of 13 televised events since 1969. See the Nielsen ratings below (read their analysis here). 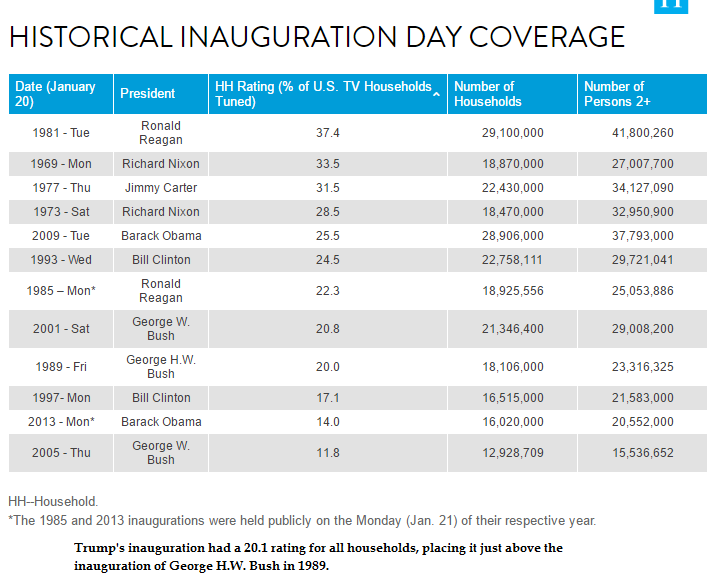 Does any of this mean anything about Trump’s presidency? Absolutely nothing. However, he seems to think he has to keep propping himself up and got his press secretary to ruin his credibility on his first day on the job.
Below is Kellyanne Conway on Meet the Press. Probably, the most ridiculous thing she said (other than “alternative facts”) was that the White House might have to rethink the relationship with the press. If you can stomach it watch:

The Trump is in for a rude surprise if he thinks he can blow off the press. That didn’t work for Nixon or Bill Clinton and it won’t work for Trump. He and his crew will only make their situation worse if they persist with an adversarial stance.