Yesterday, I described a conflict within the ex-gay movement about who founded reparative therapy. The dispute took place between 1989 and 1996 and involved Elizabeth Moberly, Joseph Nicolosi and the board of now closed Exodus International.
In the post yesterday, I published two letters to the editor, one from Moberly accusing Nicolosi of inadequately citing her work in a February 1989 California Psychologist article on reparative therapy. The other letter came from Nicolosi and claimed his work was different from Moberly’s.
Thanks to the help of California Psychological Association administrator Patricia VanWoerkom, I am able to publish the Nicolosi article. An image of part of it is below. To read the entire article, click here. 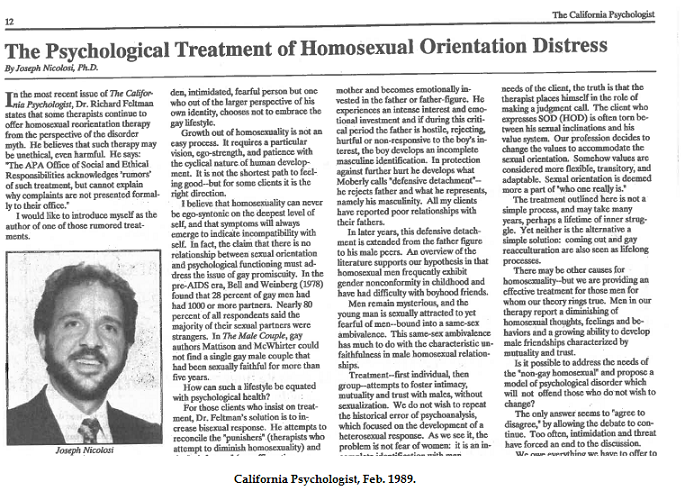 In the article, Nicolosi says: 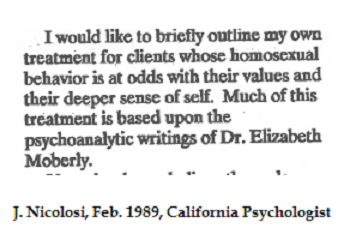 He gives credit to Moberly for her writings but this was not enough for her. In her pleas to the Exodus International board, Moberly claims that Nicolosi was merely a practitioner of her reparative therapy approach. She felt Nicolosi’s article wasn’t just based on her theoretical writings but that his entire approach was simply borrowed from her. From her point of view, he was not a developer or collaborator but someone who simply copied what she had already discovered.
Moberly pointed out to the Exodus board that Nicolosi said he was the “author of one of those rumored treatments [to help gays change to straight].” Moberly countered that Nicolosi did not author anything. He simply copied what she had written and passed some of it off as his own work.
According to Moberly, she filed an ethics complaint with the APA and CPA. Only the CPA responded, she claimed, and found that Nicolosi had inadvertently copied her material. I have reached out again to the CPA and in a future post hope to be to confirm or deny Moberly’s claim.