When I first read it, it occurred to me that there was something not quite right about the tweet below:

“A private faith that does not act in the face of oppression is no faith at all.”#WilliamWilberforce pic.twitter.com/ssJw5KOs6L

Eric Metaxas, who wrote a biography about Wilberforce, retweeted the quote without comment so surely it was said by Wilberforce, right?
I view most quotes now with suspicion (see this quote misattributed to Bonhoeffer) and this one looked fishy. Indeed, it isn’t by Wilberforce but about him.
I posted the quote on Twitter and asked for assistance tracking it down. It didn’t take long for Matthew Dickson to post a link to an Introduction written by Chuck Colson to a 1996 reprinting of Wilberforce’s A Practical View of Christianity. On Twitter at least the switch of attribution from Colson to Wilberforce took place sometime between 2011 and 2012.
Here is the quote from Colson’s Introduction: 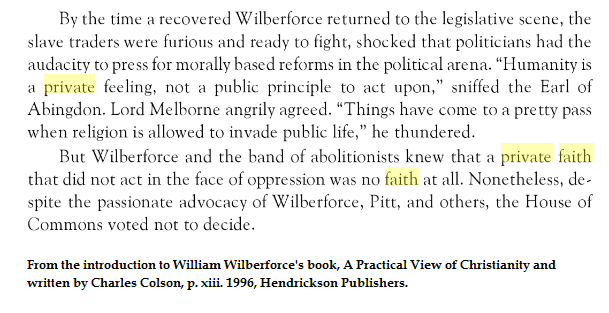 So Colson wrote it about Wilberforce. Even though it is frequently attributed to Wilberforce, it isn’t his quote.
As I have explored these fake or misattributed quotes, I have found that a major problem to accuracy is a site called “AZ Quotes.” This site is often referred to by misguided quoters. Along with Eric Metaxas, AZ quotes seems to show up frequently as a source for the misattributed quote about silence in the face of evil. Although I have reported both quotes as being wrongly attributed, the quotes remain. Perhaps, the site needs to hear from more readers.