UPDATE: Politico found multiple instances of plagiarism in Crowley’s PhD dissertation.
………….
Recently, Donald Trump named former Fox News talking head Monica Crowley to be his Director of Strategic Communications for the National Security Council. Then yesterday CNN’s Andrew Kaczynski published an expose of 50 instances of plagiarism in her 2012 book What the Bleep Just Happened Here? As disclosed in the CNN report, the transition team — who has another credibility problem on the team (Darrell Scott’s fake PhD) — came to Crowley’s defense:

Monica’s exceptional insight and thoughtful work on how to turn this country around is exactly why she will be serving in the Administration,” a statement from a transition spokesperson said. “HarperCollins—one of the largest and most respected publishers in the world—published her book which has become a national best-seller. Any attempt to discredit Monica is nothing more than a politically motivated attack that seeks to distract from the real issues facing this country.

Kaczynski’s research is impressive. There are long passages lifted from Wikipedia, Investopedia, and even her colleagues at the National Review. Comparing Crowley with Mark Driscoll’s plagiarism, I have to give an award to Crowley. Her plagiarism is extensive and involves numerous sources. Crowley has a PhD from Columbia and definitely should know better. On point, Bill Adair, professor at Duke University tweeted:

I teach an ethics course that focuses a lot on plagiarism, but I’ve never seen anything on this scale https://t.co/6nQsBGab0p

Because Crowley has academic training, I wonder if she had a ghostwriter involved who was simply sloppy. More broadly, I think the blame has to be spread out to anyone who was involved in writing and publishing the book, most notably her editors at HarperCollins.  The book acknowledgments section tells us who might also be able to explain what happened. 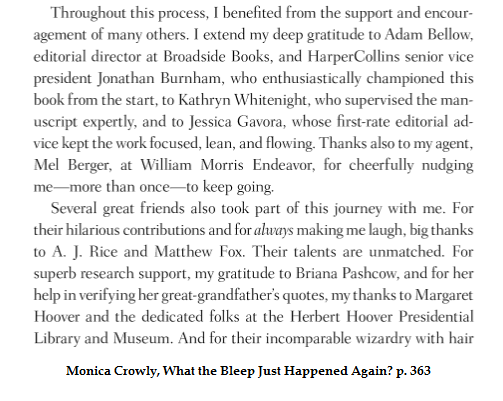 National Review
There are several ties to the National Review in this story which make it important for that publication to provide an official response. Crowley appears to have lifted work from writer Andrew McCarthy and editor Rich Lowry. Crowley’s “first-rate” editor Jessica Gavora has written for National Review and is the wife of NR columnist Jonah Goldberg. McCarthy already replied in a very charitable manner on Twitter:

I am proud to call @MonicaCrowley my friend. As her long record attests, she is whip smart, effective, and a great American patriot.

At least her sources are “whip smart.”
One problem with plagiarism, especially this extensive, is that it perpetrates a fraud. Is Crowley really capable of great work or is she simply pretending? Daily Beast writer Brandy Zadrozny articulates this problem in her response to the Trump team statement.

But see, it's not serial plagiarist @MonicaCrowley's insight. It's not her thoughtful work. She stole it. https://t.co/nbBWcvkSrO pic.twitter.com/MdiyMeve0s

Crowley has yet to comment (as far as I can determine) but barring some incredible explanation, these instances of plagiarism should disqualify her from the public trust, at least at present. Having said that, I would be surprised if the Trump team takes any principled action.