Recently, Turning Point, a so-far-to-the-right-you-can’t-see-them-from-here group, created a list of “liberal” (words really have no meaning now) professors who are supposedly a threat to free speech for conservatives on campus.  When I looked on the list I found Matthew Boedy, a guest contributor to my blog.
Matthew’s liberal offense? He doesn’t want guns on the campus of the University of North Georgia.

Dr. Matthew Boedy, a professor at University of North Georgia, believes that universities would be more dangerous if they had students legally carrying firearms. Boedy spoke out against a new bill which allows for concealed carry on campus, claiming that he feared he would be shot by disgruntled students if concealed carry was legal at the university.
Source(s): http://www.campusreform.org/?ID=7361

Sign me up. I’m not a big fan of concealed carry on campus either. The founding board of Thomas Jefferson’s University of Virginia didn’t like the idea either.
Matthew, how did you make it and I didn’t!?
I was asked about this by a reporter at Grove City College’s student paper, The Collegian. My thoughts last week. 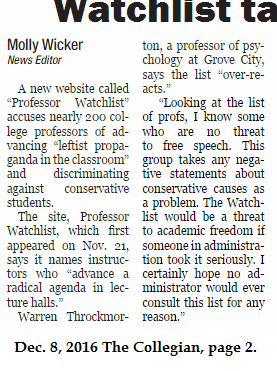 A “radical agenda?”
Jonathan Zasloff is on the list because he pointed out that the GOP catered to the KKK’s core of angry white men. Well, the KKK and other white supremacist groups endorsed Trump and Trump gave press credentials to white supremacist James Edwards.
To be sure, some are far left (e.g., Mark Tushnet), but some are moderate or even lean right. They just happened to get on Turning Point’s bad side.
I see two major audiences for this nonsense. One is prospective students and their parents. I do think it is important to warn prospective students that even conservative academics reject this stigmatization of free speech and academic freedom. Another group is administrators of conservative colleges who might use this somehow in hiring and firing. Such a use would be a tragedy and I hope academics of all stripes would come together in opposition.