Yesterday on his Wallbuilders Live show, David Barton said the sports program at Oral Roberts University in the 1970s was “where the drug culture was” and was filled with sexual promiscuity and illegal activities.  Listen again to his defamation of the ORU basketball program in the 1970s.

In an earlier part of the show, Oklahoma Wesleyan University president Everett Piper said the sports programs should be aligned with the rest of the college mission. In response, at 34 seconds into the above segment, David Barton began talking about “the school I attended.” Barton attended Oral Roberts University and said his program was different than Piper’s.
Transcript (starting at 34 seconds)

But the school where I attended, when I attended there that was not their thing. Their thing was to have the best program ever. So even though I went to a religious school, it was not about faith and character, it was about how high you were in the nation. So in basketball, talking before with the team there and what we did, and we made it to the Elite Eight in the tournament, but the character was so bad that, that’s a period I remember very clearly in my experience because in outing some things that were going on in the basketball team, that was where the drug culture was, that was where it was really promiscuous, that’s where a lot of illegal stuff, and outing that I ended getting death threats and I had to have cops carry me from class to class across campus because of the death threats on a Christian university, for outing things that violated the honor code that we all signed to go to the university.

These claims were denied by Glenn “Smitty” Smith, head athletic trainer at ORU who came to the school in 1972 (the same year Barton did). Smith said he did the drug testing and no one in that era failed. Barton’s rant also is contradicted by news reports from that era which quote Oral Roberts about the basketball program. Roberts had the same stated values and goals as Everett Piper. From the NYT, 12/5/71, page 9: 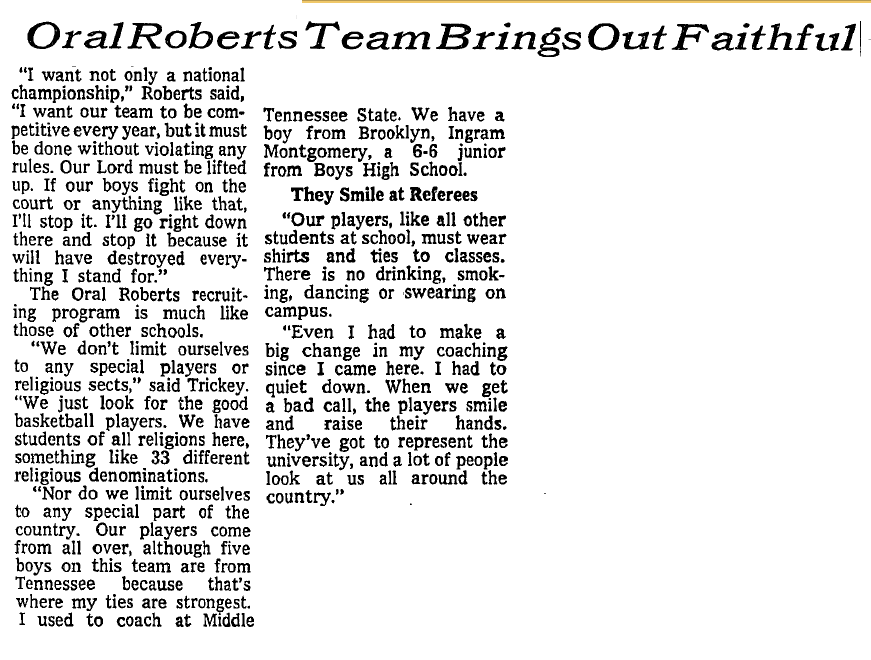 A 1972 NYT article points out that most of the basketball team was African-American and occasionally complained about the religious zeal of other students. However, there was no description of a different behavioral standard for the team.
A 1973 article addressed both the code of conduct and the racial differences. 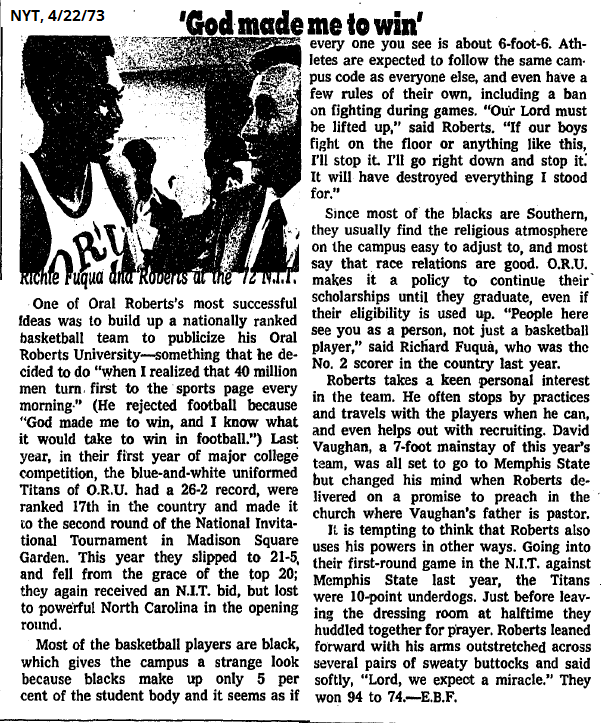 I fully understand that Roberts assessment might not have been accurate but I can’t find any evidence of what Barton claimed either, especially as school policy.