On September 7, religious right history writer and Christian nation advocate David Barton posted a video on his You Tube and Facebook accounts claiming to have an “earned doctorate.” The very next day he removed the video, perhaps in light of the revelation that the degree may have come from unaccredited Life Christian University. LCU is on record as giving what it calls “earned doctorates” to famous people who never attended the school.
Since he removed the video, Barton has not commented or explained why he claimed to have an earned doctorate but failed to say from where he earned it.
In case you missed it, here is Barton’s video with some commentary provided by me in pop ups to keep things light (see the original here).


In an another amusing twist, it turns out that Barton took his information about honorary doctorates from a secondary source. Even though he cited West Virginia University in the video, the phrasing he used to describe why a school might award an honorary doctorate came directly from reference.com and not West Virginia University as Barton claimed. Barton said:
The website Reference.com cites WVU’s honorary degree web page and reads: 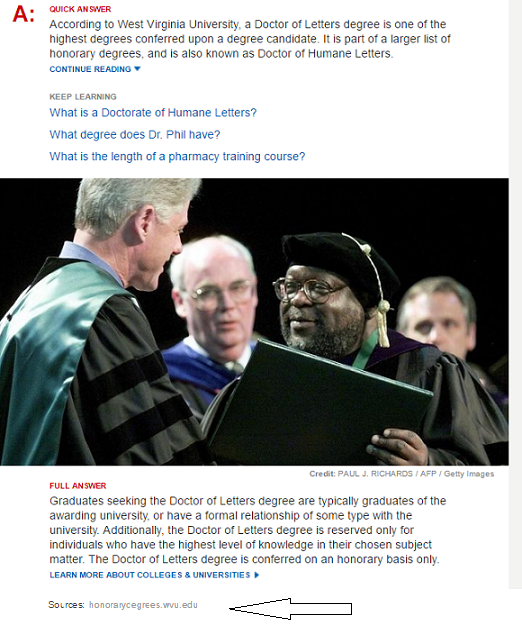 Although reference.com cites WVU, a search of West Virginia University’s honorary doctorate page doesn’t turn up that phrase. Apparently, the phrase Barton’s quoted and attributed to WVU was a paraphrase constructed by reference.com. He used that paraphrase and attributed it to WVU.
In any case, neither of Barton’s honorary degrees come from WVU so their procedures don’t apply. Barton’s honorary degrees come from two schools which are not regionally accredited. Barton is on the board of one of those schools (Ecclesia College).
The bottom line is this. Barton’s tenuous credibility is at stake. He directly and forcefully claimed to have an earned doctorate. However, he hid the diploma and then removed the video evidence. He has not explained why he won’t supply verification after saying for years that he did not a PhD. It is simply not credible to claim to have an earned doctorate and then refuse to disclose the details about it. To claim such a degree without having one is academic fraud and in the real world has significant consequences.