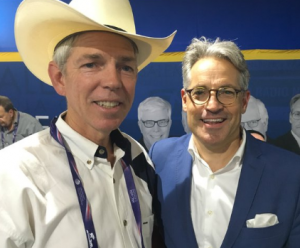 On Tuesday, I posted an audio clip of David Barton on Eric Metaxas’ radio show talking about the two times when Thomas Jefferson cut up the Gospels to create an extraction of the morals of Jesus. During Jefferson’s first term, he revealed his beliefs about Christianity to some of his closer friends and in the process decided to cut out of the Gospels portions which Jefferson believed were actually from Jesus, leaving the rest behind.
On the program, Barton told Metaxas a made up story about what Jefferson did and mixed in a little truth with some error to create a flawed picture. Metaxas took it in without question. In my Tuesday post, I debunked Barton’s story about how Jefferson got the idea to cut up the Gospels and today I want to set the stage for what is a more difficult aspect of this story: identifying the verses Jefferson included in his first effort to extract the true teachings of Jesus from the Gospels.
The reason it is more difficult to know what Jefferson included in his 1804 effort is because the original manuscript has been lost. There isn’t a copy we can look at. The version completed sometime after 1820 is the one commonly known as the Jefferson Bible. That version can be purchased from the Smithsonian and viewed online.
Do We Know What Jefferson Cut Out of the Gospels?
Reproductions of the 1804 version exist but for reasons I will address in this series, there are some disputed verses which Jefferson may or may not have included. There really is no way to be sure.
Jefferson mentioned both versions in a letter to Adrian Van Der Kemp in 1816, Jefferson wrote about both extractions:

I made, for my own satisfaction, an Extract from the Evangelists of the texts of his morals, selecting those only whose style and spirit proved them genuine, and his own: and they are as distinguishable from the matter in which they are imbedded as diamonds in dunghills. a more precious morsel of ethics was never seen. it was too hastily done however, being the work of one or two evenings only, while I lived at Washington, overwhelmed with other business: and it is my intention to go over it again at more leisure. this shall be the work of the ensuing winter. I gave it the title of ‘the Philosophy of Jesus extracted from the text of the Evangelists.’

The “work of one or two evenings only, while I lived in Washington, overwhelmed with other business” is a reference to his 1804 effort which was done for his “own satisfaction.” When he referred to “his intention to go over it again at more leisure” in an “ensuing winter,” he referred to the version he later completed sometime after 1820. It should be obvious from this letter that Jefferson viewed the second project as a completion of the 1804 work which was “too hastily done” while attending to his presidential duties. Jefferson does not refer to them as two separate projects with separate purposes. Rather, the 1804 version was more like a trial run and the latter was the product of more time and concentration.
How Do We Know What Verses Jefferson Included?
There are two primary sources for our knowledge of what verses Jefferson included. First, ever meticulous and organized, Jefferson prepared a listing of texts he planned to include. Michael Coulter and I included images of the originals (housed at the University of VA) in our book Getting Jefferson Right. The second source is the cut-up Bibles Jefferson used to cut out the verses he pasted together to form the 1804 version. In contrast to Barton’s claim, Jefferson didn’t cut out only Jesus’ words and he certainly didn’t cut them all out and paste them end to end.
Although these sources are critically important, they are not sufficient to be sure about what Jefferson included. A major barrier to certainty is that Jefferson cut out some verses which were not listed in his table of texts. This can be discerned by reviewing the parts of the Gospels which were cut out. What can never be known for sure is why Jefferson cut out more verses than he intended. We cannot assume that he intended to cut out any verse other than what he listed in his table of verses. However, we cannot assume he didn’t decide as he was doing it that he wanted to include something on the fly.
There are good arguments to be made for both possibilities. Jefferson said he did the 1804 version “too hastily.” Thus, he may have made some errors in cutting and cut too many verses or simply cut some in error from the wrong page. Anyone who has literally cut and pasted any kind of craft project can probably relate to that possibility.
On the other hand, it is certainly plausible to think that Jefferson changed his mind as he read through the Gospels again. He may have decided he wanted a particular verse that he didn’t include in the table. Nothing would have stopped him from clipping it.
Another possibility exists for the 1804 version which we know is true for the 1820 version. At times, Jefferson surgically extracted miraculous content from within a verse. In other words, he cut out a verse from the Gospels but when he included it in his manuscript, he only included a part of the verse.  For instance, Jefferson included Matthew 12:15 in his 1820 version, but he left out the end of the verse where the healing took place.*

But when Jesus knew it, he withdrew himself from thence: and great multitudes followed him, and he healed them all.

Jefferson intentionally left out the healing (“and he healed them all”) even though he included the verse. Clearly, it is not enough for us today to know what Jefferson cut out of those Gospels in 1804. For a perfect reconstruction, we would have to know what parts of the verses he included. A few disputed verses do have some miraculous content but that is no guarantee that Jefferson included that content in his compilation. We know he used partial verses in his second attempt; it is very plausible that he did the same thing the first time around.
Barton’s story to Metaxas completely glosses over these facts. If we really want to get inside Jefferson’s thinking about Jesus in the Gospels in 1804, we should first look at the table of texts he constructed (click here to examine those tables). Then we can look at the verses which Jefferson cut out but didn’t list. However, we must approach those disputed verses carefully. We don’t know why he cut them out and we don’t know what parts, if any, he actually included.
Barton Also Uses a Flawed Secondary Source
In The Jefferson Lies, Barton links to two secondary sources for his information about what is in the 1804 version. In at least one case, the source has a major error which we point out in Getting Jefferson Right. In the next post, I will address that secondary source error.

I challenge Eric Metaxas to bring on an actual historian and/or me to discuss the issues raised recently about his book, If You Can Keep It or this series.
*Jefferson Bible, ch 1:59-60.