Late last week, David Barton appeared on Bryan Fischer’s American Family Association radio program Focal Point. One topic of conversation was the contents of Thomas Jefferson extractions from the Gospels, aka known as the Jefferson Bible. More properly, the Jefferson Bible is considered to be the Life and Morals of Jesus which Jefferson put together sometime during or after 1820. The first time Jefferson cut and pasted portions of the Gospels was in 1804 when he did it at the White House in a few nights work.

On Fischer’s show, Barton said Jefferson included miracles of healing and feeding the multitude in the 1804 version. In his book, Barton claims that three miracles in Matthew 9 (the raising of Jairus daughter in Mt. 9:1; healing a bleeding woman in Mt. 9:18-26 and the healing two blind men in Mt. 9:27-34) were included by Jefferson in The Philosophy of Jesus. However, a review of Jefferson’s table of texts as found in Henry Randall’s 1858 biography of Jefferson and Dickinson Adams’ definitive work demonstrates that these texts were not included in either of Jefferson’s abridgments.

The fourth false text Barton uses is Matthew 11:4-6 which reads:

4Jesus answered and said unto them, Go and shew John again those things which ye do hear and see: 5The blind receive their sight, and the lame walk, the lepers are cleansed, and the deaf hear, the dead are raised up, and the poor have the gospel preached to them. 6And blessed is he, whosoever shall not be offended in me.

Again, a review of the table of texts comes up empty for this passage. Jefferson did not include it in either his 1804 or his 1820 versions.

Now complicating things a bit is the fact there are a couple of transcription errors in Randall’s texts that Dickinson Adams revealed when he studied the handwritten documents years later. I provided images in Jefferson’s own hand here. However, the transcription errors are not relevant to any questions we examine in this post.

Here are Randall’s transcriptions; Barton says he relies on these as well as Dickinson Adams for his research. However, the Matthew 9 and 11 passages are not there. There are a couple of verses which are ambiguous about miracles but in each case, there is strong reason to believe that Jefferson would have extracted the miraculous sounding part. Remember, no copy of the 1804 version survives. We have to go on his table and then compare those passages to what he did with them in the 1820 version. Contrary to what Barton says, the versions are not that different. Here are the two pages of these texts from Randall: 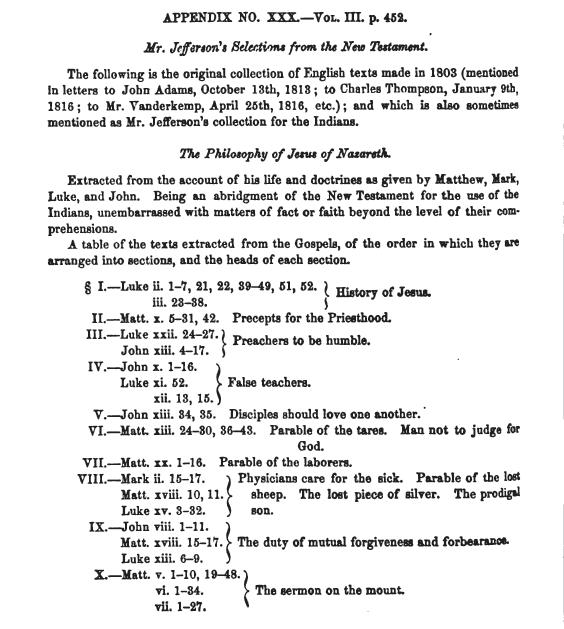 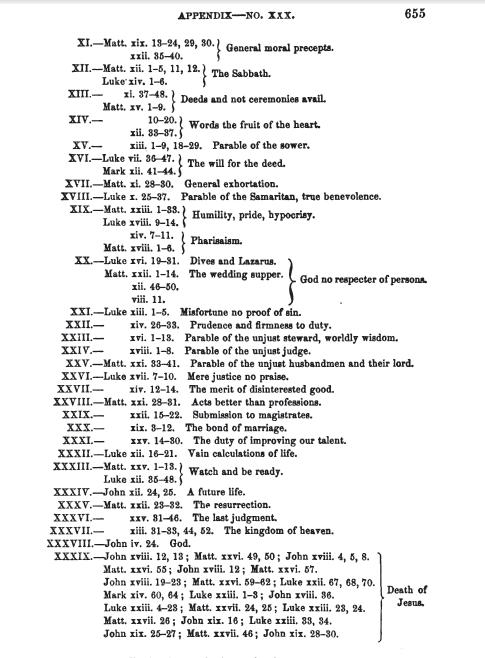 Some will be surprised to see passages relating to the afterlife and a final judgment. However, Jefferson believed that God (without Jesus and the Holy Spirit) would judge people based on their deeds.

There are some disputed passages in the reconstruction by Dickinson Adams. For instance in Mt. 10: 5-31, Jesus gives instructions to his disciples to heal the sick, and raise the dead. However, this verse is not included in the 1820 version and may have been excluded from the 1804 version as well since there was a verse Jefferson did include on the reverse of Mt. 10:8. It is also possible that Jefferson included it in haste or viewed the instructions with a naturalistic meaning, as did his mentor Joseph Priestley. Healing the sick and even raising the dead could be interpreted as spiritually sick and dead. In any case, all of the verses which refer to healings in the 1804 version are in dispute because of their exclusion from the 1820 version and the fact that we do not which surgical cuts Jefferson made in the 1804 version since we don’t have one extant.

Barton also claimed that Jefferson gave his extraction to missionaries for evangelism. Since there was no Easter or Great Commission or John 3:16 in Jefferson’s extractions, one wonders what religion the Indians would have adopted with this little book as their guide.

Want a reality based alternative to The Jefferson Lies? Try Getting Jefferson Right now at Amazon and Barnes and Noble.