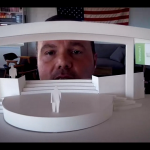 Claiming he has not been served, Mark Driscoll filed a motion to dismiss the racketeering lawsuit against him and former Mars Hill executive pastor Sutton Turner brought by former members of Mars Hill Church in Seattle. Two couples from the church allege misuse of funds.
Like Turner’s motion to dismiss, Driscoll appeals to rules of procedure requiring service of a lawsuit in 90 days. The essential claim of the motion is that the Jacobsens and Kildeas have abandoned the suit.
Driscoll claims his whereabouts are well known.
After Turner filed his motion, I asked attorney Brian Fahling for a comment with no reply.
Driscoll plans to launch his new church The Trinity Church in Scottsdale on August 7.