Sutton Turner’s Seattle attorney has notified the court and Turner notified plaintiff’s attorney that service would be accepted on the RICO lawsuit naming him and Mark Driscoll as defendants.* They are accused of running the church in a manner to financially benefit the leaders, especially Mark Driscoll.
In response to the suit, Turner exclusively provided the following statement via email:

For over a month, I have offered to meet with the Jacobsens and Kildeas. Unfortunately, they have not responded.  It has been 19 months since I resigned from Mars Hill. I have had many meetings and conversations with people, even people that were previously listed in legal demands against Mars Hill Church.  Although the plaintiffs have requested meetings with Mars Hill Church in the past, that request has not been offered to me personally in the 19 months since my disassociation with Mars Hill Church.
Since I have yet to be served with this lawsuit, I have hired an attorney to take service for me in the state of Washington. Last year, I wrote at length of my involvement in ResultSource and Global even after threats of litigation from counsel associated with Mars Hill Church.  I believe I have done everything I can to resolve this peaceably. Unfortunately, it is now time to prepare for a legal defense of these allegations.

Early in March, Turner said, “The history and culture of Mars Hill is one of both a lack of trust and transparency. Lack of transparency breeds distrust and distrust causes less transparency. It is a perpetual cycle that can exist within any organization or relationship.”
Turner’s co-defendant, Mark Driscoll, recently said he had not been seen the suit but called the allegations malicious and false.
An image of the notice of appearance is below (full document). 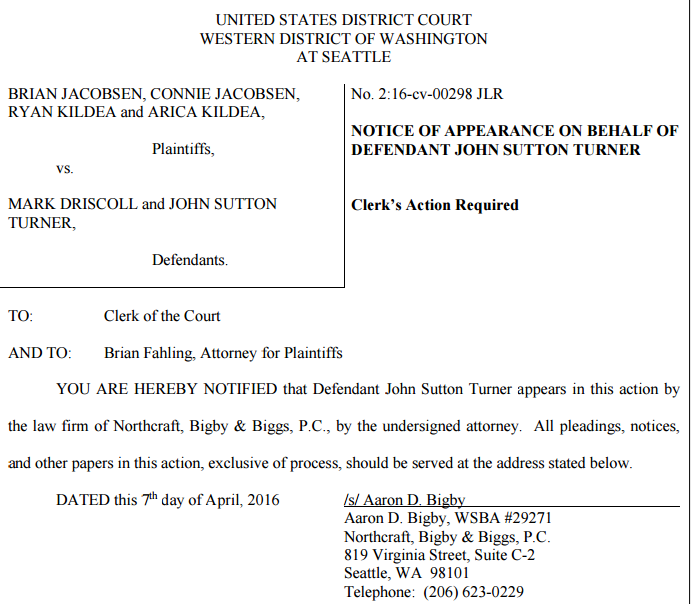 * Earlier I stated that Turner had been served the lawsuit. That is not accurate and Turner has not been served. I apologize for the error.