This sounds a little more contrite than the letter to Calvary Chapel pastors but like that one, this letter is light on substance. A friend informed me that this ad was on page 59 of December’s Christianity Today. 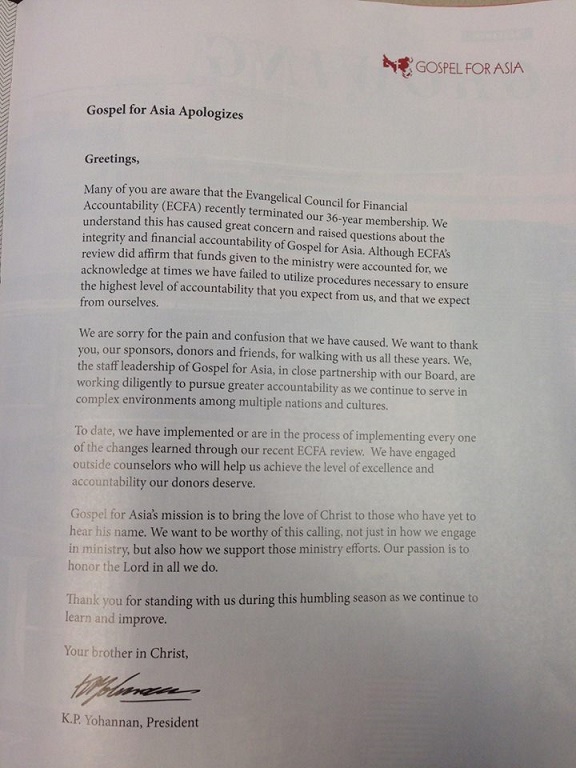 As I demonstrated yesterday, the ECFA did not affirm that all funds were accounted for.  Regarding missing funds, this is all the ECFA wrote in their report of the investigation of GFA:

15. Alleged missing funds according to Indian FC6 forms. ECFA received allegations that a significant amount of funds were missing based on attempts to reconcile GFA’s audited financial statements and field partner’s Indian FC6 forms. ECFA reviewed this matter to determine compliance with ECFA Standard 4. On July 20, GFA staff provided ECFA with a reconciliation of these amounts, which reflected a transfer of $29,300,000 to a GFA India account in Hong Kong. GFA staff reported that this transfer was not required to be reported on Indian FC6 forms and that this amount along with fiscal year timing differences led to the allegations of significant missing funds.

ECFA did not describe any review of Indian law nor did ECFA review more than one year. Over 8 years, there is an estimated $128 million unaccounted for. The ECFA did not review this claim and so it is false for Yohannan to tell CT readers that the ECFA cleared them on this allegation.
A big problem with this letter is that Yohannan is now telling people that they are learning and improving when for years, they claimed to be acting with the highest financial integrity.  Since for years GFA has claimed to be doing the very thing they now claim they are starting to do, why should they be believed now?
Here’s what ECFA had to say about GFA’s declarations:

Finally, we feel compelled to observe our concern, in general, about the following in addition to the above ECFA compliance-related issues:
Certain information provided to ECFA by GFA that was crucial to our review was, at least initially, inaccurate.
Our review process has covered nearly four months. Certain pertinent information about the compliance issues was not revealed to ECFA by GFA until late in the review process.
We have learned significant information from sources unrelated to GFA that we should have learned directly from GFA.

According to the ECFA, the way GFA leaders brought forth information did not inspire confidence.