That word haunted me as I watched the undercover video of Planned Parenthood’s Senior Director of Medical Services Deborah Nucatola describe the care taken by abortion providers when they decide where to crush a fetus. 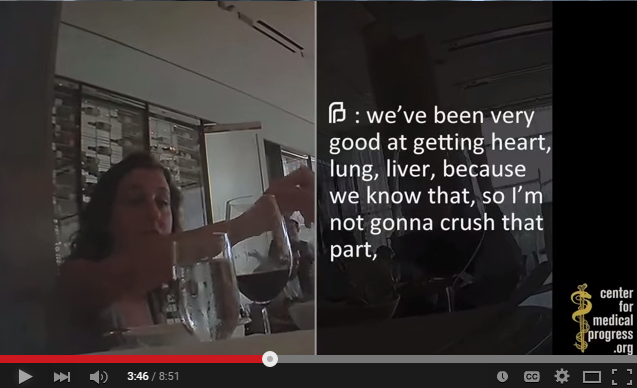 Under different circumstances, a physician would take similar care not to crush the baby anywhere but in this case, care is taken to avoid damaging tissue which might have market value.
This is hard to process.
Nucatola says, “I’m going to basically crush below, I’m gonna crush above, and I’m gonna see if I can get it all intact.”
Kermit Gosnell missed an opportunity. He kept body parts in jars. Apparently, there is a market for them.
Of course, this video should lead to a legal and Congressional investigation. This video, even though heavily edited as Planned Parenthood points out in their rebuttal, raises enough questions and concerns that an investigation is warranted. Perhaps, we will find everything PP did was legal. Even if so, we may decide that some things should not be legal.
The video reminds us about what happens in an abortion. I remember interviewing Hillary Clinton’s Arkansas physician William Harrison who told me:

Anyone who has delivered as many babies as I have, and has seen hundreds of living and dead embryos and fetuses being spontaneously aborted as have I, knows exactly what we are doing when we provide an elective abortion for our patient. We are ending the life of an embryo or a fetus. Not the life of a person, but certainly a creature that might have become a person under other circumstances.

Crushed.
This video (see below) may lead to an investigation and discovery of wrongdoing. But it will almost certainly lead others to reflect about what happens in an abortion. I doubt any laws will change but I suspect some minds might.