David Barton frequently claims that he speaks to over 400 groups per year. Once he said he spoke to over 600 different groups per year. Given the number of days in a year and his other activities, this seems like a fantastic claim. After reading a document from his defamation lawsuit, I now think I know how he gets to this number.
In 2012, Barton sued two candidates for the Texas Board of Education for defamation, Judy Jennings, and Rebecca Bell-Metereau. The case was settled out of court in late 2014. Jennings and Bell-Metereau said in a campaign video Barton was known for speaking to white supremacist groups. In fact, Barton only spoke to two such groups early in his career and he said he didn’t know about their views at the time. He settled out of court gaining an apology from the defendants.
In Barton’s affidavit, he claimed that the accusations of Jennings and Bell-Metereau hurt his business. To prove it, he called on one of his employees, Tracy Geron, to provide financial information from years 2009-2011. I will deal with Barton’s claims of harm in a future post. For now, I want to focus on the claim of presentations before 400 groups per year.
In the affidavit provided by Geron, a numerical summary of Barton’s activities for years 2009-2011 was provided. See all three years of presentations below: 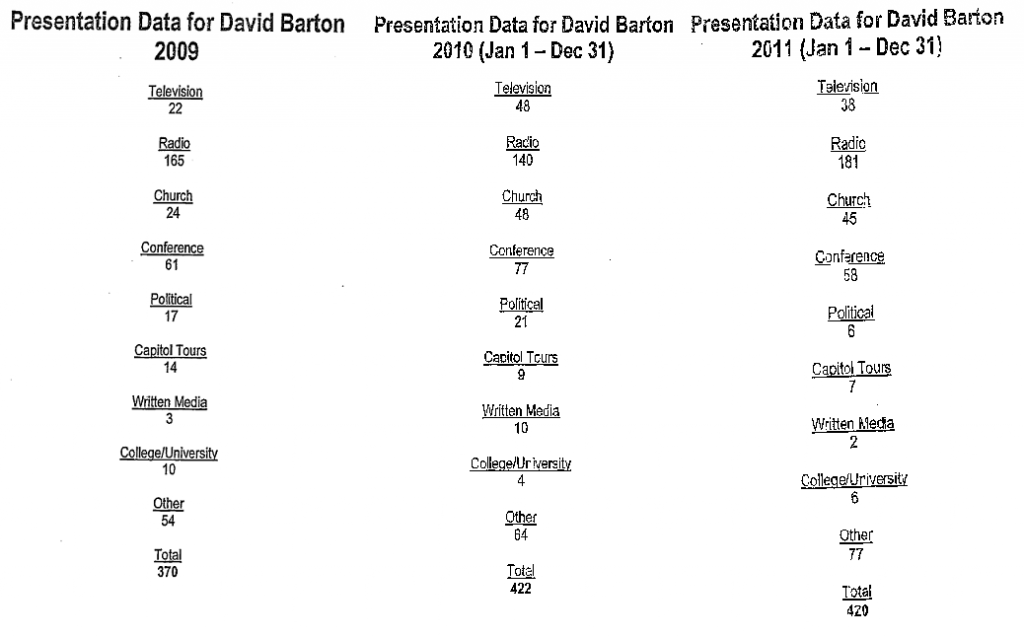 Notice that the largest single category of presentations is “Radio.” Barton does a taped radio show (ironically called Wallbuilder’s Live) each week day. He appears on most of them. It appears that he is counting his daily show as a group presentation. Doing so pushes the number of “groups” he addresses to over 400. Looking at these lists of presentations, it does not appear that he addresses 400 different groups per year. In this list, Barton even includes the articles he writes as a presentation. By this logic, I spoke to at least 590 groups in 2014 (blog posts), and that doesn’t include my columns in the Daily Beast and elsewhere. If my college lectures and other speaking opportunities are included, I do twice as many presentations as Barton. Does that mean I speak to twice as many groups?
I would really like to know what falls under “other.”
From these data, it doesn’t appear that the 2010 allegations about white supremacy hurt Barton much. He only had two fewer presentations in 2011. As you will see from the pdf of this financial statement, his financials remained strong in 2011 despite his claims to have suffered harm. More on that in a future post.