Initially, the story of Craig Gross buying an email list from Church Leaders List seemed like a marketing story gone sideways. However, there appears to be much more to the matter.
At the end of Christianity Today’s article on this, Bob Smietana wrote:

On Tuesday, Dean apologized for his part in the drama over the list. He admitted that he’d been involved the initial sale of the list to churchleaderlist.com (screen cap of page now removed from the web).

Now Justin Dean’s website is down (and his Twitter page has been removed) and so that statement is not available (except via Google cache) and screen cap below. 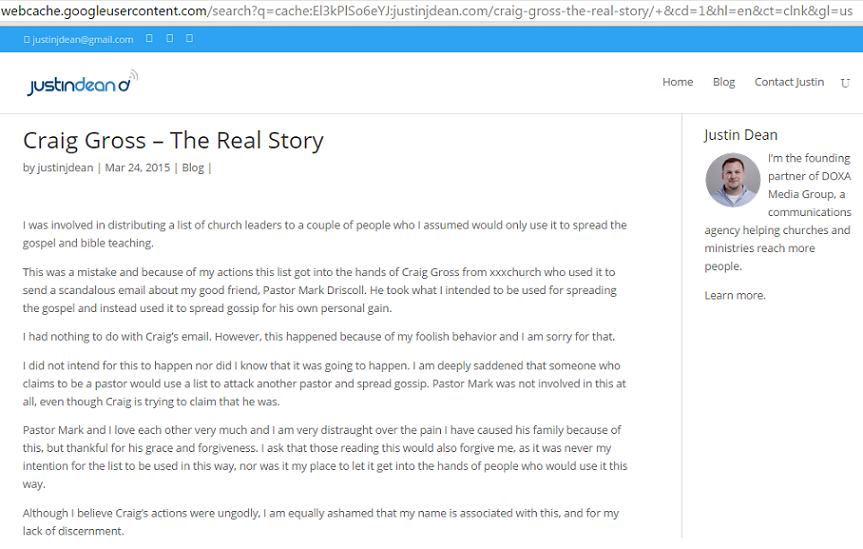 According to Craig Gross’ explanation, Dean’s involvement may have been that Dean was churchleaderlist.com. I asked Dean yesterday and today about his dealings with Church Leaders List but have not heard back from him. Gross wrote:

I found  it interesting that as soon as I posted this that Justin Dean posted a blog on his website that he somewhat apologized for distributing the list to me. Lets be clear, he sold the list to me. He didn’t broker a transaction. He sold me the list along with several other people who paid $1350-$1500 for the list.

I asked the lawyer that was in charge selling the assets for 100k earlier in 2014 and he said that no one has purchased the rights to sell these assets yet.

I have seen communications which indicate to me that Mars Hill Church has not sold The Resurgence email lists. Thus, if the lists have not been sold by Mars Hill Church, then how did Church Leaders List get them?
From my conversations with former Mars Hill staff, I believe there is a limited group of people who have access to the lists.
Mars Hill Church is still a viable entity but has not responded to repeated requests for information or comment. Given the non-profit status of the church, the public and former members still have an interest in their operations. If the church is selling member emails without permission, then they should come forward and acknowledge this. If not, then the question remains, how did Church Leaders List get that information?