UPDATE: Just a bit ago, Craig Gross updated his post with the following information: 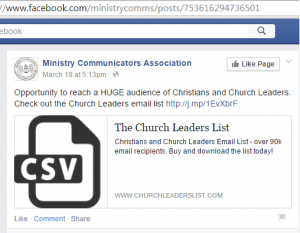 related email lists. If these assets have not been purchased, then how did Church Leaders List get the email list?
UPDATE 2: Wenatchee the Hatchet just posted a screen cap of Justin Dean’s Ministry Communicators Association with an ad for Church Leaders List on his MCA Facebook page.
————————————-
Last night, I noted that Craig Gross, director of xxxchurch.com, sent out an email to a mailing list he purchased from a now missing-in-action website called Church Leaders List. The email included former Mars Hill Church members and those who had signed up for information from Mars Hill’s training ministry, The Resurgence. Gross received a backlash from supporters of Mark Driscoll because the email included critical remarks about Driscoll. Read the entire email here.
Now Craig Gross has provided his perspective on the matter at his blog and Justin Dean has done the same on his website.
Dean’s statement to me in full is as follows:

I issued an apology here: http://justinjdean.com/craig-gross-the-real-story/. I regret my involvement in distributing the list and am deeply sorry. While I was not involved in Craig’s email, I’m equally at fault. Although I think it’s a shame that your story isn’t about Craig Gross’s misuse of the list to spread gossip, and his unapologetic attitude towards doing so.

The website is no longer available but a screen capture of the cache is below: 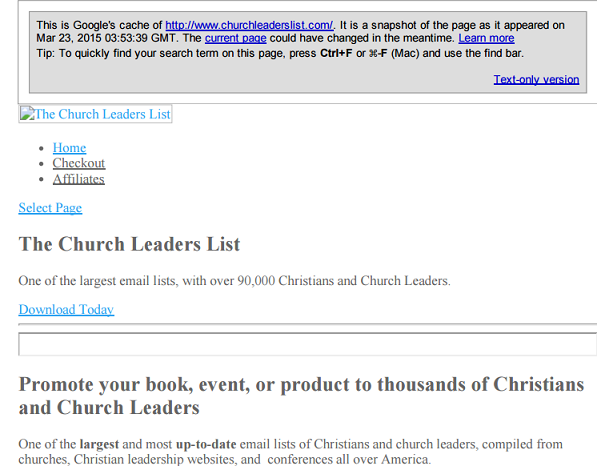 Justin Dean said he believed the mailing list would be used for spreading the gospel. The website recommended by Dean indicates that the list can be used to promote books, events or products.
The pitch for the website says the lists were compiled from churches, websites and conferences. Apparently, some or many of those addresses have been used without permission.
According to Craig Gross, Justin Dean pitched the mailing list (Gross says Dean pitched The Resurgence list) to Gross’ staff on March 15 (see his post for a screen cap of the text). Dean says in his post that he was “involved in distributing a list of church leaders to a couple of people who I assumed would only use it to spread the gospel and bible teaching.”
Gross then purchased the list and sent the email which stirred intense reaction from Mark Driscoll supporters yesterday afternoon. Sometime afterwards, the Church Leaders List website and twitter accounts were pulled. Gross received a refund for his purchase from Church Leaders List.
Gross then asked Dean if Dean sold the list. Gross noted that the media templates for Dean’s new Doxa Media company and Church Leaders List phone # is 678-829-4458, Dean’s phone # is 678-829-4455 (also uses 678-829-4450). A call to the Church Leaders List doesn’t get an answer.
According to Gross, Dean denied owning the list, saying instead that he was “involved” in distributing it.
This may blow over quickly but there are some important issues raised. Why did Church Leaders List close down as soon as former Mars Hill people started to complain? Who was/is behind Church Leaders List and where did they get those email addresses? Are the current leaders of Mars Hill Church selling emails of former members? If so, I wonder how Mars Hill Church members feel about this use without permission.
Additional information: It is curious that Marshill.com, Theresurgence.com, and a bunch of other related websites are registered to Justin Dean. Did Mars Hill Church sell them to him? Did they give them to him?