David Barton’s vindication campaign is getting some traction among far right publications.
The newest American Family Association Journal ran a brief summary of the December 2014 World Net Daily article. The AFA article concluded with this unsubstantiated sentence: “Barton has also won legal judgment against others who published lies about his veracity and his ministry.” See below. 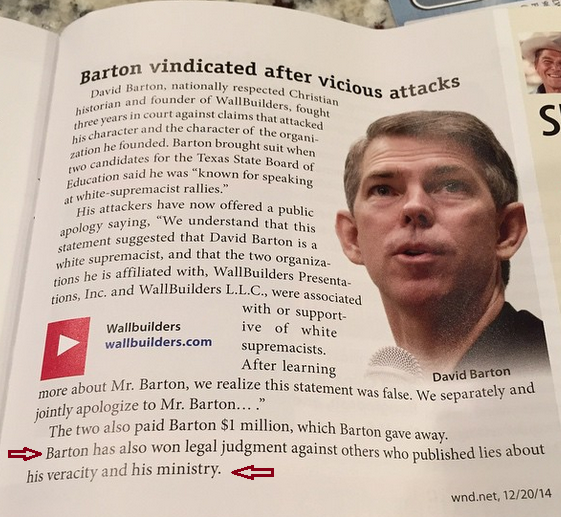 While Barton did settle out of court with his accusers on the white supremacy charges, he dismissed the person who questioned his veracity (W.S. Smith) from the suit in April of 2012. To date, Barton has not published any judgment relating to his historical claims. John Aman, the author of the World Net Daily article on Barton’s suit, said a Texas judge ruled that statements about Barton’s historical claims were “false and defamatory.”

Barton also won in court against W.S. Smith, a self-described atheist who published an online article in 2010 calling Barton “an admitted liar” whose “books have been picked apart time and again and exposed as fallacious.”

Smith was a no-show throughout the lawsuit, disappearing shortly after Barton sued him in September 2011. Barton’s legal team hired a private detective and published notices in Texas newspapers statewide in an unsuccessful attempt to find the elusive writer.

Smith disappeared after he boasted, in an email to Huffington Post columnist Chris Rodda that he was “happy to meet” Barton in court “because the truth in [sic] on my side.”

So far, Mr. Aman is standing behind his story. I informed him that Parker County, TX public records disclose that W.S. Smith was dismissed from the suit in 2012. Aman responded that Mr. Barton was the source of his information about the disposition of the suit. Aman provided no response to the Parker County, TX records.

At issue are the claims that “Barton also won in court against W.S. Smith” and “a Texas court found Smith’s assertions about David Barton both false and defamatory.” According to the Parker County TX records, Smith was removed from the case. The only names on the settlement are Jennings and Bell-Metereau. I call on World Net Daily, John Aman and David Barton to produce court documents showing a win against W.S. Smith and a finding that Smith’s claims were “both false and defamatory.”

Of course, even if a judge wrote those things, it wouldn’t place David Barton on the Oral Roberts University basketball team, or make his denial of progress toward an HIV vaccine true. It wouldn’t change the fact that he omits parts of quote from America’s founders that don’t align with his views, or that the Consitution doesn’t quote the Bible verbatim.