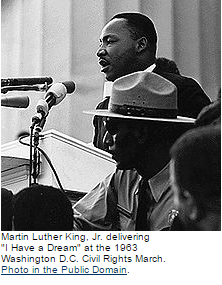 In the Fall of 2013, the founder and director of the Institute on the Constitution Michael Peroutka made some outrageous claims regarding Martin Luther King, Jr. First, on the Steve Deace Show, Peroutka said King did not call for civil rights for blacks in his “I Have a Dream” speech. At the time, I demonstrated that the claim was false.  Then, Peroutka produced a video which repeated the same false claims. Then, Peroutka followed up by asserting that civil rights laws should not have been passed and that the government should not define discrimination for private employers.
Despite Peroutka’s false telling of King’s work and his rejection of civil rights statutes, the IOTC claims to truly understand King’s work. Recently, Jake MacAuley rewrote Peroutka’s 2013 article on King and made the same false claims.  MacAuley claims that the riots and unrest surrounding Michael Brown’s death in Ferguson demonstrates the failure of civil rights. He then lifts, word for word, from Peroutka’s 2013 article:

MacAuley added his own spin to the false claims:

Unlike many modern day welfare state proponents, Dr. King’s demands were right because they were based on a righteous pretense (sic).
It appears to me that this concept of “civil rights” was a gross distortion of his work. This bastardized version of truth would actually only serve to compound power into the already corrupted task master, the human heart, or more specifically stated the human occupied civil government institutions.

As I pointed out in 2013, King’s writings contradict Peroutka’s claims.  And now I want to add to the rebuttal by citing again King’s own words every day this week. With help from Grove City College colleague Todd Allen, I have identified several of King’s writings which address King’s views of civil rights and his self-identification as a leader in the civil rights movement.
If MacAuley’s point was that King would have rejected violent protest, he would have been correct. However, MacAuley moves in a different direction. He makes a case for theocracy.

It appears to me that this concept of “civil rights” was a gross distortion of his work. This bastardized version of truth would actually only serve to compound power into the already corrupted task master, the human heart, or more specifically stated the human occupied civil government institutions.
At one time in our history, we looked to God’s Word to determine what was right and wrong. This was a fixed and certain standard.
Having jettisoned this fixed, objective standard, government tramples our God-given rights and now pretends to issue what it calls “civil rights”.
But “civil rights” are make-believe. Real rights come from the Creator.
In Ferguson, Missouri we have witnessed the folly and the futility of make-believe “civil rights”.

While King believed that human nature was tainted by sin, he also looked to non-violent protest to help move the “human occupied civil government” to guarantee by statute equal treatment before the law for all citizens.
As indicated by his statements here, MacAuley and the IOTC want a theocracy where the Bible (as they understand it) is the governing document. While many founders believed the government’s respect for the natural rights of all citizens was consistent with the Bible, they did not enshrine the Bible as the “fixed, objective standard” from which all civil rights are derived. In the real America, the foundational governing document is the Constitution.
What kind of rights could people expect under a biblical government as envisioned by the IOTC? According MacAuley’s employer, Michael Peroutka, civil rights legislation should never have been passed. Peroutka told Steve Deace:

The civil government has no authority to tell any private employer what kind of employees to hire and fire, or what constitutes discrimination. And obviously, I do mean and I would include the so-called civil rights laws are not law, they never should’ve been passed, they’re not law now, they weren’t law then, they aren’t law now because there is no such thing as a civil right.

On the point of discrimination, Peroutka’s website hosts an article consistent with his statements to Deace. On the website, a 1956 essay by Calvinist writer Frederick Nymeyer describes discrimination which is permitted within a society:

The second table of the law involves prohibitions against theft, murder and coveting after one’s neighbor. According to Nymeyer, one may discriminate against a neighbor based on his race, as long as one doesn’t use that freedom to discriminate as a basis for killing, stealing or coveting.

But the moral crux of the problem of discrimination is the discrimination against unalterable characteristics. Is it moral to discriminate against unalterable characteristics regarding which a man is helpless? Here is where the race problem becomes so sensitive. A man with a white skin cannot do anything about it; a man with a black skin cannot do anything about it. Why discriminate against (choose against) a man for that for which he has no remedy, for an unalterable trait that is unattractive to you and maybe others? Here is where cruel injustice appears immorally to intrude itself into the situation. But is it injustice?

If the writer has made an earnest effort to carry a tune and keep time (which he has) but is unable (which happens to be the fact), is an injustice done h i [him] because he is “discriminated” against by a choral society which discriminates against a trait he had which is unalterable for h i [him]? Of course not. Justice does not consist in denying reality or the facts of life; injustice is not identical with recognizing reality (that I cannot sing).

Peroutka’s declaration that the government has no right to tell an employer what constitutes discrimination is consistent with this article on his website but flies directly in the face of Martin Luther King Jr.’s work. King fought for the very civil rights laws that Peroutka condemns.
Channeling Peroutka, MacAuley ends his article by saying:

In both private and public policy, we must remember that God created only one race – the human race. Therefore, all elevation or denigration of individuals or groups based on skin color is immoral and shameful because it violates the Law of Nature and of Nature’s God!

This sounds nice, but I wonder what it means. Peroutka told Steve Deace that the government has no authority to enforce discrimination laws and Peroutka’s website includes a justification for discrimination based on race. I can’t make any sense of these contradictions.
In contrast to IOTC’s claims about King, Jr.are his own words. Consider this segment of the “I Have a Dream” speech:

Peroutka’s website justifies discrimination based on race. Peroutka told Steve Deace that the government shouldn’t define discrimination for employers. Clearly, King Jr.’s eloquent teaching about the indignity of discrimination contradicts Peroutka.
In his Letter from a Birmingham Jail, King Jr. mentioned white ministers who believed in God but did nothing to help gain civil rights. King, Jr. wrote:

I have traveled the length and breadth of Alabama, Mississippi and all the other southern states. On sweltering summer days and crisp autumn mornings I have looked at the South’s beautiful churches with their lofty spires pointing heavenward. I have beheld the impressive outlines of her massive religious education buildings. Over and over I have found myself asking: “What kind of people worship here? Who is their God? Where were their voices when the lips of Governor Barnett dripped with words of interposition and nullification? Where were they when Governor Wallace gave a clarion call for defiance and hatred? Where were their voices of support when bruised and weary Negro men and women decided to rise from the dark dungeons of complacency to the bright hills of creative protest?”

Religious voices were mixed with some silent but others opposing equality. In the face of religious confusion, King reminded his readers that civil and legal remedies were required:

My friends, I must say to you that we have not made a single gain in civil rights without determined legal and nonviolent pressure. Lamentably, it is an historical fact that privileged groups seldom give up their privileges voluntarily. Individuals may see the moral light and voluntarily give up their unjust posture; but, as Reinhold Niebuhr has reminded us, groups tend to be more immoral than individuals.

We know through painful experience that freedom is never voluntarily given by the oppressor; it must be demanded by the oppressed. Frankly, I have yet to engage in a direct action campaign that was “well timed” in the view of those who have not suffered unduly from the disease of segregation. For years now I have heard the word “Wait!” It rings in the ear of every Negro with piercing familiarity. This “Wait” has almost always meant “Never.” We must come to see, with one of our distinguished jurists, that “justice too long delayed is justice denied.”

We have waited for more than 340 years for our constitutional and God given rights.

Here King, Jr. refers to the rights he sought as being “constitutional” and “God given.” While King, Jr. believed that equality of the races was a natural right, he also believed, in contrast to Peroutka, that civil rights must be gained through government and civil action. Since the privileged Southern segregationists and the oppressed civil rights advocates differed on what God wanted, the government had to guarantee those rights or else they would never come. It is fine in the abstract to say government exists to guarantee God given rights, but the devil is in the details. There are many views of who God is and what He wills. Thus, “determined legal and non-violent pressure” was necessary to make civil rights gains over the objections of those who thought God didn’t approve of racial equality.

As an antidote to the wild IOTC misrepresentation of King, I urge you to read the entire Letter from a Birmingham Jail.

My intention is to feature something from King, Jr. each day this week to address the IOTC distortion of his work.