The following post by Dave Bruskas and Mark Driscoll was made to Mars Hill Church’s internal website The City and also sent via email to staff and elders on May 25, 2012. This memo contrasts with the reality of compensation for the executive elders, apparently unknown to the lead pastors and members at the time.

This memo should be read along with the memo Sutton Turner sent to Mark Driscoll and Dave Bruskas in March of 2012 where Turner said the church was in serious financial trouble due to poor planning and lack of financial transparency. Also recall that the church paid ResultSource over $200,000 in late 2011 and early 2012 to get Mark Driscoll’s book Real Marriage on the New York Times best-seller list. Another relevant fact is that the church solicited $6.4 million from the congregation at the end of 2011 in order to help launch four new church plants in January 2012, the same month that Real Marriage was released. The executive elders told the people that in addition to launching the churches, Mars Hill planned to use that money to develop an animated children’s video series. Like the Jesus Festival, the series was never animated. 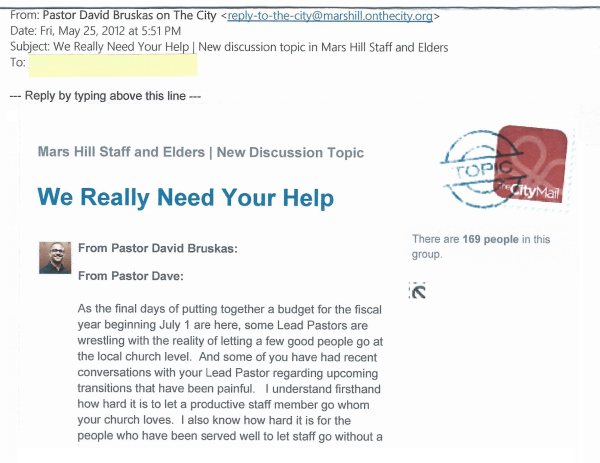 The full text of the memo is reproduced below.

As the final days of putting together a budget for the fiscal year beginning July 1 are here, some Lead Pastors are wrestling with the reality of letting a few good people go at the local church level. And some of you have had recent conversations with your Lead Pastor regarding upcoming transitions that have been painful. I understand firsthand how hard it is to let a productive staff member go whom your church loves. I also know how hard it is for the people who have been served well to let staff go without a fight. So that makes Lead Pastors twice as vulnerable. They must face the disappointment of the departing staff member and the disappointment of the church. And much like I would expect any good leader to do, many Lead Pastors are fighting hard to keep staff and avoid cuts creatively and boldly. But we need to let go of that fight at this point. Here are a couple of reasons why.

First, we have, in reality, a single budget for all of our 14 churches. So this means for every cent in exceptions that once church receives above the $10 per adult compensation and ministry operation allotment, another church loses the same amount. So the only way for one church to win is for another church to lose. Second, the cost numbers per adult that Pastor Sutton and the Finance Team have given for targets aren’t arbitrary nor merely guidelines. They are hard targets that have been carefully researched and must be met. And if we don’t live within our means, we won’t just face the loss of future expansion opportunities, we will have to scale back our current ministry services significantly. And in the most dire circumstances, shut down a few of our churches. As of today, we are paying extra fees in financing the costs of existing buildings because of our unattractive financial condition to potential lenders. This must change for us even to be good stewards of what we already have.

A couple of final thoughts. First, we know this isn’t your fault, but the result of past decisions and practices. And while we will provide you a new and helpful global narrative soon to communicate this really tough news to our members, to be critical of the past means that we have to say things publicly that might hurt good leaders with great intentions who served Mars Hill well. Some of whom are still faithfully serving along side us today. And that to us seems like a losing proposition. We also know that this process has had some starts and stops along with some conflicting information. Please forgive us for that. We are continually receiving new financial information that has caused some hiccups along the way.

Second, these are decisions the Executive Elders are making in unity. We have spent countless hours discussing together both the state of our finances and our present staffing model through face to face meetings, emails, texts and phone calls. We have worked through each of your staff rosters in an attitude of prayer thinking through every angle we could imagine to keep as many people as possible. We grieve the fact that this cut is deep and results in letting go of some very good people who are performing well and helping the church. We have done the same thing with our central team reducing our costs 40%. It is super painful and we are very sympathetic towards you, your team and your church.

And more than anything, we hurt for those who have lost jobs. We would request that you abide by our spending targets per person. Please respect these decisions by not coming to us individually in the hope that they may be changed. Pastor Sutton and I are happy to clarify anything that is confusing. But we can’t devote any more time to hearing appeals.

We love you all very much and appreciate your devotion to Jesus and His church in this tough season. We do feel loved and supported by you and hope you feel the same from your

These are tough seasons. Personally we love our staff.

Pastorally we are concerned for our staff. Practically we grieve for our staff. Professionally we don’t have a choice but to reduce our staff. We simply have to live within our means. If we reduce staff now we can provide lead time for people to find an option while receiving severance. Had we not done this we would have had to reduce staff without severance this summer. We know this is hard but it is better than the alternative. The various leaders making these decisions across four states have prayed and labored over these tough calls. Your Exec Elders have cut first and deepest. Central is reduced 40% and working double time. We are vacating our offices reducing our staff and in contact nearly every hour every day pulling together and seeking Jesus’ wisdom. Your Executive Pastor Sutton is up at 4am everyday praying for our church. Now is a time for everyone to pray and love a lot. Lastly, without being improper we’ve frankly been through tougher times and deeper cuts before. After 15 years i can say this is not the worst storm we’ve weathered. We will get through it together by Gods grace. Trust me on this fact.

This memo illustrates why transparency is needed now. Dave Bruskas is the remaining executive and presumably is the one responsible for the current decision not to release information on the Global Fund, severance packages and the Driscoll investigation report. In 2012, the executive elders had gotten raises while telling the staff that they had cut “first and deepest.”

What were the cuts? In Driscoll’s case, he cut his salary for several months from $503,077 to $480,769. While some people were losing their jobs, Driscoll cut his half million dollar salary by 4.4% on an annualized basis. Then, less than three months later, Sutton Turner recommended that the church raise Driscoll’s pay by nearly $150,000. Clearly, the first cut was not the deepest. 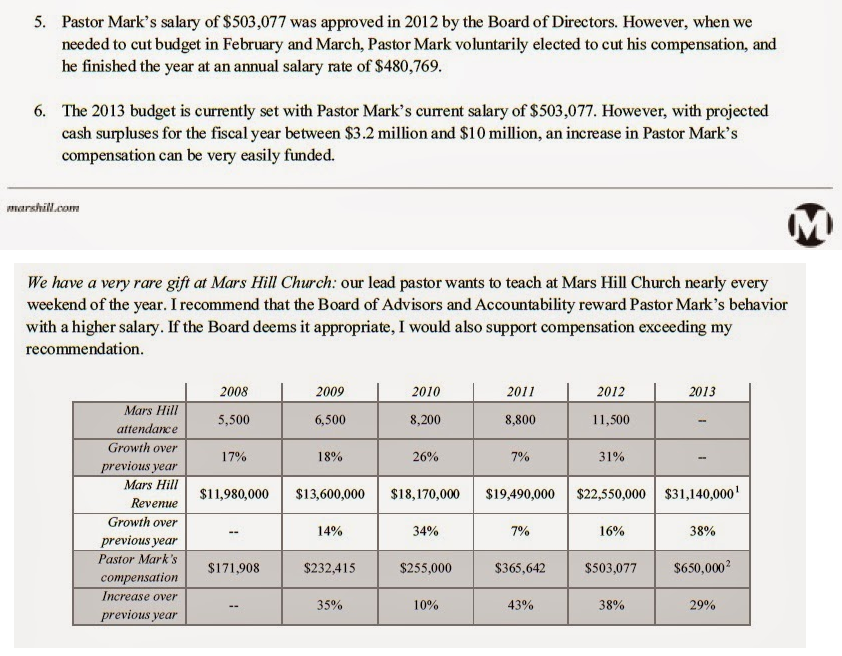 Year after year, Mars Hill members have been asked to give sacrificially above and beyond tithes to the Global Fund and various year-end financial drives (Turner called them “Hail Mary” efforts) with no knowledge of the financial moves being made by leadership. As the church winds down, secrecy still appears to be the norm at the church with members being asked to give until the end while the leaders have decided not to disclose the Driscoll investigation, a full accounting of the Global Fund, or the commitment of the church to executive severances.

The current remaining elders have an opportunity to step up and walk in the light as they were asked to do by the nine former pastors who took a stand for disclosure and transparency. Time is slipping away and it remains to be seen what that legacy will be.