As part of his media defense, John Catanzaro has issued a lengthy media kit. According to the release available from John Catanzaro’s Facebook page, the naturopath provides wellness consultation for Mars Hill executive pastors, serves on an Advisory Board Council at Mars Hill Church and is a special advisor to Mark Driscoll. Catanzaro lost his license to practice naturopathic medicine in January of this year due to allegations of administering unapproved cancer vaccines to his patients.  He has a hearing scheduled for August of this year and has been mounting a media campaign in his defense. On page 6 of the release, Catanzaro claims to be helping Mars Hill and Acts 29 develop a ministry model for wellness integration: 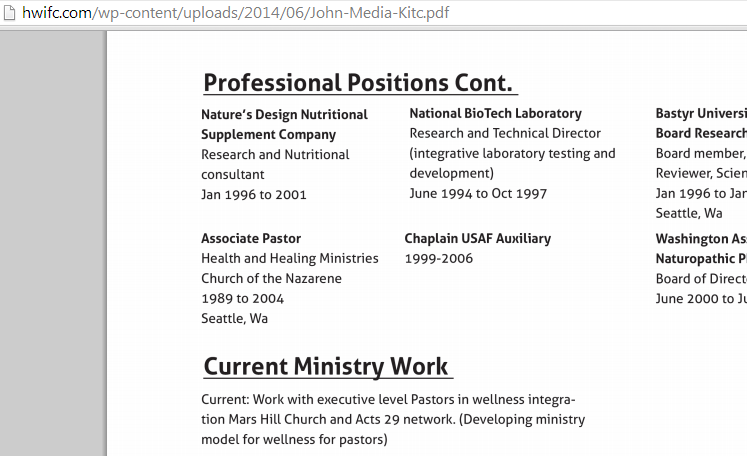 Then on page 9, he claims to be a special advisor to Mark Driscoll: 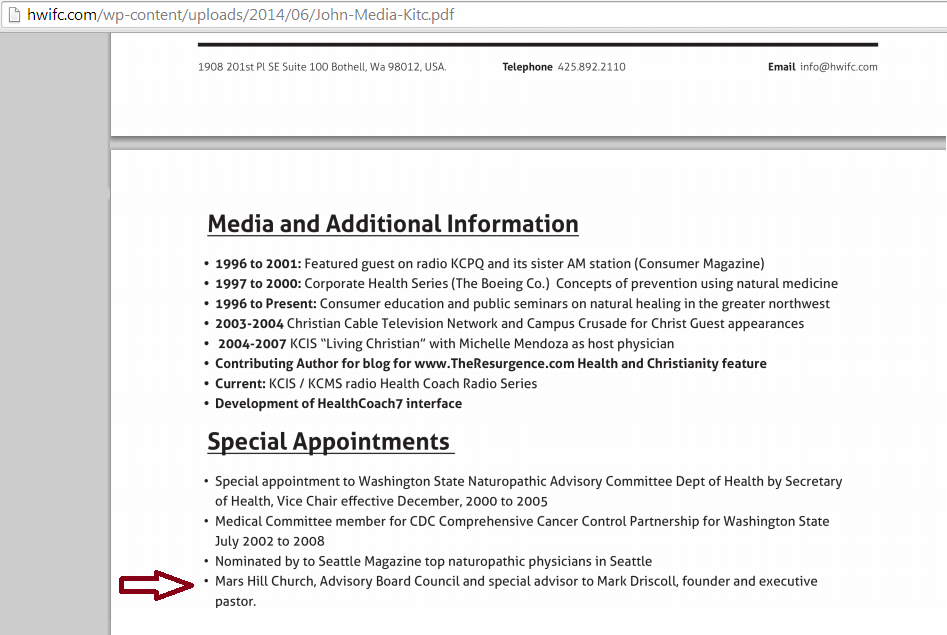 I have contacted Justin Dean at Mars Hill about these claims. I will post any response I get.
Catanzaro was once a featured writer for Mars Hill Church’s Resurgence website. When his licensed was suspended, all of his articles were pulled from the website. Mark Driscoll has mentioned Cantazaro as a naturopath who helped him overcome his “adrenal fatigue” (not an actual medical condition) and provided an introduction to Catanzaro’s book on marijuana.
It is hard to tell if the claims in the media kit are accurate. On one hand, I have heard from internal Mars Hill sources that Catanzaro administers vitamins and various costly interventions exclusively to Mars Hill executive elders as a part of the wellness plan. On the other hand, Catanzaro also has claimed a research partnership with the University of Washington and the Dana Farber Cancer Institute at Harvard. According to spokespersons for the U of W and Dana Farber, the claims of a partnership were never true. Dana Farber expressly demanded that Catanzaro cease using the name of the clinic in his materials.  It is not clear how Catanzaro could provide naturopathic services to Mars Hill since his license has been suspended.
In addition to his media campaign, Catanzaro has launched a fund raising effort he says will benefit his patients.