Now we know one thing that the donations to Mars Hill Global purchased.
In a post on the Mars Hill Church website, Mars Hill Everett franchise lead pastor Ryan Williams thanked Mars Hill Global for financial help with the down payment and restoration costs for the old Washington National Guard Armory building now occupied by the Everett church. Williams said:

Our people work super hard and are amazingly generous to the church, but we just did not have the income to fully fund our own down payment and renovation expenses. 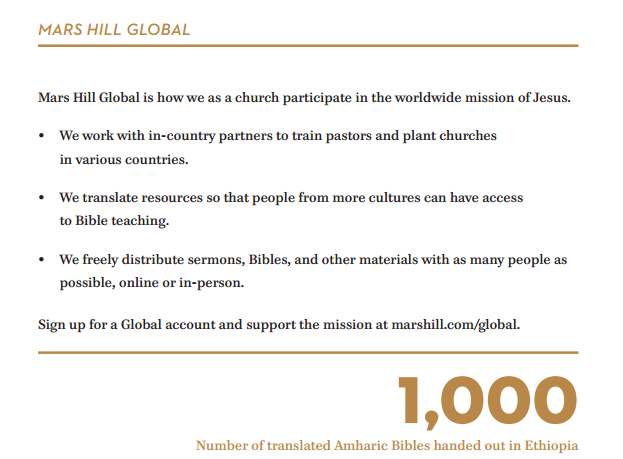 Mars Hill Global is made up of 250,000 people around the world who tune in to the Mars Hill Church podcast on a weekly basis. You, our global audience, are praying and giving to Mars Hill Church to see more people meet Jesus, grow in him, and join his mission. One example of what your participation has done over the last year is the planting of Mars Hill Everett in their new home. This letter, from Everett’s lead pastor, Ryan Williams, outlines the specifics of the direct impact you are having on the church.

So what was/is Mars Hill Global? Is it how Mars Hill Church participates in international outreach? Or is it a large group of non-Seattle people who consume the media and donate on the website? Given the various descriptions of Mars Hill Global and Mars Hill Extended Family, I think it is easy to get confused.
Specific to the act of donating money, prior to May of this year, donors (wherever they were) were able to give to a specific Global Fund described above as an international effort. Now, donors can’t give to this fund since the option as been removed.
Prior to this message from Ryan Williams, I can’t find anything that linked Global to Everett. In the promotional video for Mars Hill Everett in October 2012, Mark Driscoll lays out the financial need to the people of the church in Everett and asks them to give toward the goals. There is no mention in the video of help from Mars Hill Global. 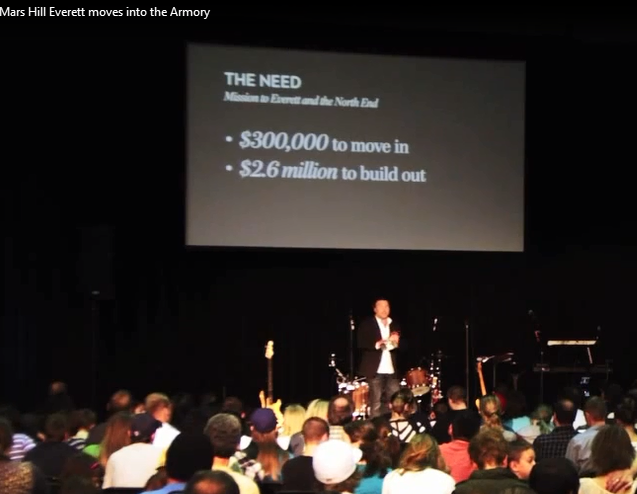 On the page describing the need for Everett’s move into the Armory, members were invited to give to the effort in a fund designated for that purpose: 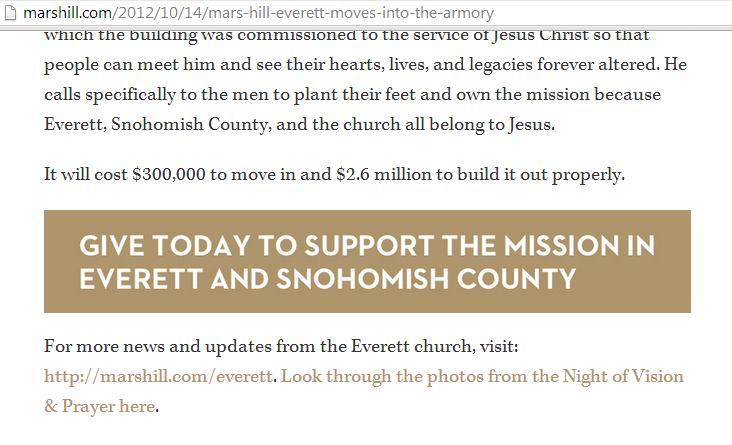 According to the Herald Business article, the building’s purchase price was $1.275 million.

The property was ultimately purchased for $1.275 million not long after Mars Hill Church purchased the 104-year-old First Congregational Church building in Tacoma for about $1.9 million. The organization is not shy about handling restorations of historic properties.

When the church first bought the building, the story was that the people attending were going to fund the purchase and renovations.  According to an October 27, 2012 Everett Herald article, the leaders wanted the people to “own” the move to the new building:

Church members will be asked to help pay for the extensive remodel. “We really want our people to own what Jesus is doing here in Everett,” Mitchell said. “About $300,000 moves us in. We could do services there. We’re hoping and praying to be in there by Easter.”

In July 2013, executive pastor Sutton Turner told the church in an email that Everett was raising funds for their building with a report on the progress.

Tacoma & Everett Fundraising
Tacoma and Everett continue to make progress raising money for their buildings. Tacoma has $132,000 left to raise, and Everett needs another $360,000. Both churches are praying to finish fundraising and full occupy their new buildings by January 1.

On September 11, 2013, Pastor Ryan Williams asked the congregation to give more:

In October 2013, Mark Driscoll told the congregation that the people of Everett had been generous but that more gifts were needed. Nothing was mentioned about people giving to the Global Fund were helping pay for Mars Hill Everett. Driscoll wrote:

The people of Mars Hill Everett have been very faithful. Over 90% of the members have given to the fund. Since September 2012, we have collected 50% above and beyond our annual budget. (Mars Hill Everett brings in about $900,000 a year, and we are close to bringing in an additional $450,000 in the past 13 months.)
We don’t have deep pockets, or big givers. What we have are a lot of faithful givers doing what they can every month.What we need now, Mars Hill, is some help from the rest of you in order to finish making this home for the Everett church ready. We’re almost there, but we’ve still got a little ways to go. Everett is trying to raise $750,000 to get the building ready, and we’ve got $316,000 left to complete this project. As the people of Mars Hill Everett have demonstrated, all it takes is enough people giving a little bit together to make things happen.
We have amazingly generous people in Everett. They are all in. Will you help them move into their new home?

So at the end of the day, who paid the costs for Mars Hill Everett’s relaunch in the Armory? Most likely both the Mars Hill Global Fund and donations from Everett members actually paid those big bills. Global Fund givers might or might not mind that the donations they thought were going to Ethiopia and India (according to the 2013 Annual Report) went at least in part to buy and renovate a building in Everett. This arrangement certainly seems to run afoul of the Evangelical Council for Financial Accountability’s guidelines; but maybe they don’t care now. It’s all water under the bridge now, right?
Even though the money is spent, it might be interesting to find out what else Mars Hill Global purchased. Perhaps more thank you notes are coming.
*Mars Hill’s use of the term Mars Hill Global is inconsistent. Sometimes they seem to refer to it as the source of funds, as in our “global audience” or “Mars Hill Extended Family.” Other times such as in the 2013 Annual Report, Mars Hill Global refers to the destination of the funds, as in funding international mission work to Ethiopia and India. Sometimes, it appears that they mean both at the same time as in the international audience is helping to fund mission efforts with local Mars Hill church planting and international efforts. The real issue according to the ECFA is donor intent. A key question is are the funds going where the receiver implied they are going and the donor intended. In this case, giving to a Global Fund would naturally create the impression that the funds were going to international use. These are the funds that I am interested in knowing more about. Were the funds given to the global funds used for international purposes? The source of the funds doesn’t matter that much. It is the intent of the donor that matters.
For all posts on Mars Hill Global, click the link.