In life — especially later life, Tom E. Watson was a racist politician who found support among white Georgians. In death, he continues to find support from a cadre of white Southerners who want to turn back the clock. However, time marches on and Tom Watson’s statue has been removed from a place of prominence in front of the Georgia Capitol.  While African-American legislators and their supporters are happy about this turn of events, the white nationalist group League of the South laments the move.
In this BET.com article out yesterday, League of the South president Michael Hill criticized the legislature saying they were “caving in to political correctness.” The League sponsored a protest of the removal in November.
So what is the League upset about? What did Tom Watson stand for?
Watson didn’t think highly of “nigger-lovers” like Andrew Carnegie and especially Robert Ogden who ate with African-Americans and even made his employees do so. Watson published his racist views in his magazine, The Jeffersonian. In the following excerpt, his racist views are on full display in the article, “The Fool Friends of the Negro Do Him Enormous Injury.” 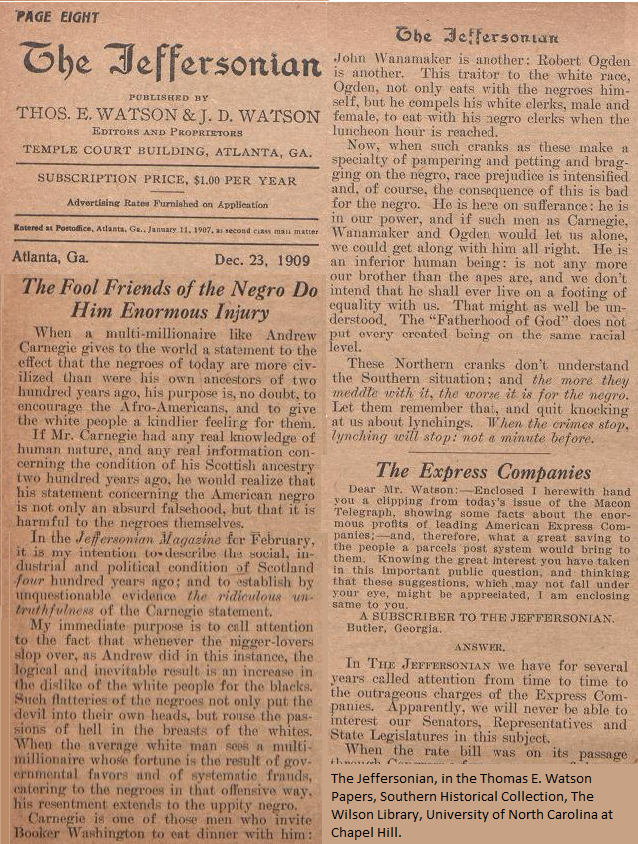 Note Watson’s justifications of lynchings and his threats that the situation in the South would get worse for “the negro” in proportion to the meddling of the Northerners in the affairs of the South. According to Watson, standing for equality is meddling. Let’s remember that this hero of the League of the South wrote in the beginning of the last century, long after the South had lost the war.
There are numerous illustrations of Watson’s anti-black, anti-Jewish, and anti-Catholic views. This website opposing the statue has many quotes with links to the original source. I provide just a few.

One of the Civil War Amendments to the Constitution frees our brother in black; and he is now very free, everywhere, and is robustly asserting his right to be more so, especially at the North where he is so universally loved and fondly coddled.
“In the South, we have to lynch him occasionally, and flog him, now and then, to keep him from blaspheming the Alminghty, by his conduct, on account of his smell and his color. – The Jeffersonian, Volume 14, Issue 1, 4 January 1917 (Page 4)
White men made our social system what it is. White men made our governmental system what it is. White men founded our educational and religious systems. And white men should maintain what their ancestors established. We don’t need any of the colored and inferior races to defend our homes and firesides, our institutions and our liberties. We don’t need the negro in the army, nor in the civil service. We don’t need the Chinaman, the Jap, or the Hindoo. The uniform, the gun, the office, the ballot belong to white men, and our future will never be safe until we exclude from military and political privileges every colored man whomsoever. – The Jeffersonian, Volume 8, Issue 15, 13 April 1911 (Page 9)
“But the Negro? Poor, inferior copyist of the master-race, he is as incapable of maintaining a civilization as he is of originating one. For himself,, he can do nothing. Civilize him in America and send him to Liberia, and what happens? He sinks, lapsing toward the barbarous state; and begins to implore the whites to come to his relief.
“Civilize him in San Domingo, and what is the result? As soon as the French go away, and the negro becomes his own boss, down he goes. The varnish of Latin culture wears off, and there’s your nigger. And such is the chaotic bestiality into which he plunges, that the whites must needs rush to the rescue… you seldom see, in one of our towns and cities, a negro buck or young woman who has no bodily defect… Lacking in the characteristics that make for civilization, the negro can not be educated into white black-men.” – Watson’s Magazine, February 1910 (Page 108)

Because Christian liberty has been the product of Western civilization, should the white stock of Europe and American disappear through racial amalgamation or outright genocide, then both liberty and civilization as we have come to know them will cease to exist. As whites have lost the will to defend their inheritance, there has been a corresponding increase in the willingness of the colored races to destroy Western Christian civilization and replace it with their own vision of the “good society.” That vision, or nightmare, as it were, will have no truck with the rule of law, equity, or fairness. It will be predicated on the “intimidation factor”–the employment of brute force by the strong against the weak. In short, it will be “payback time” for the alleged mistreatment that minorities-cum-majorities have suffered at the hands of the White Devils.

Hill told the Economist that the removal of the Watson statue a “campaign against Southerners, a campaign against whites.”
Given what Watson promoted, I say we need more campaigns like this one. Hill was not quite correct in his statement to the Economist. The campaign is against white supremacist Southerners who can’t get over the loss of the Civil War. The campaign is against people like Michael Peroutka, board member of the League of the South by night and teacher of the Constitution by day. Peroutka laments that the South lost the war in his Institute on the Constitution essay, Fireworks, Gettysburg, and a Bittersweet Fourth of July. In the essay, Peroutka says “America” lost the battle of Gettysburg:

The second sadness comes from the historical proximity of the defeat of our American forces at Gettysburg.

Who was defeated at Gettysburg?

On the fourth of July, 1863, after three days of brutal and desperate fighting to defend and preserve an American way of life, American soldiers retreated in the rain through Frederick, Maryland and slipped back across the Potomac River to the relative safety of Virginia.

Peroutka calls the Southern war to defend slavery “desperate fighting to defend and preserve an American way of life.”

I wonder what “Independence Day” thoughts went through the minds of these men as they marched away from that horrific scene where they and their brethren had sacrificed life and limb for the cause of American Independence. What singular faith and courage led them to continue the struggle to defend America from the growing tyrant!
Though most people living in America don’t realize it, the Army of Northern Virginia was the last force capable of countermanding the centralized tyranny that had, more than one hundred forty-two years ago, succeeded in undermining the concept of the Constitutional Republic. When Lee lost at Gettysburg, no earthly force remained that could stand against the Washington leviathan.

Peroutka’s League of the South continues to fight for the Confederate “way of life” by standing with Tom Watson, a racist white supremacist. In response, other Southerners have moved the statue and I hope it is not the last such icon to go away.