Last week, the Springboro School Board canceled two controversial summer courses on the Constitution. Both courses were offered to the public as a way to evaluate them for possible use in the schools. However, because of concerns expressed by the public, the courses were canceled. In light of what I have learned about the courses, I commend the school board for their action.
In my write up of the situation I focused on the 12 week course offered by the Institute on the Constitution. The IOTC is an educational project of the law offices of Peroutka and Peroutka, based in Pasadena, MD. To me, a disturbing aspect of the IOTC course is the connection of IOTC founder Michael Peroutka to the League of the South. The League of the South is a neo-Confederacy organization which promotes Southern nationalism. They seek to create a political climate that supports the secession of Southern states from the rest of the country in order to form a nation which protects “the Anglo-Celtic core population (i.e., white) and culture of the historic South.” One inspiration for the League is the 1858 pro-slavery, pro-secession organization League of United Southerners.
Beyond the obvious problems with the League’s mission, I wondered why the IOTC would offer a course in the Constitution if the real aim is to separate from the nation and form a new Constitution based on the Bible. However, after watching Michael Peroutka speak at the 2012 League of the South annual conference, I got a better sense of the purpose of the course. Reform or restoration is not in view. Watch:

Here is the transcript of his remarks (after the break):

We have a basic Constitution course, now again I don’t disagree with Dr. Hill at all, that this regime is beyond reform. I think that’s an obvious fact and I agree with him. However, I do agree that when you secede, or however the destruction and the rubble of this regime takes place and how it plays out, you’re going to need to take a biblical worldview and apply it to civil law and government. That’s what you’re still going to need to do. Whether we’re going to have to have this foundational information in the hearts and minds of the people, or else liberty won’t survive the secession either. You see what I’m saying? So this view, I saying that because I don’t want the League of the South, for one minute to think that I am about reforming the current regime, and that studying the Constitution is about reforming the regime. I like many of you, and like Patrick Henry, probably have come to the conclusion that we smelled a rat, smelled a rat from the beginning. However, we believe that it is essential to take a biblical view of law and government and then make those applications so we publish actually three courses of instruction.
I’m in the commercial mode now, this is a commercial. We publish a course on the U.S. Constitution. We feel like it would be a great builder for you in your workshops, in your, when Dr. Hill said somebody called and said, ‘nothing’s going on.’ Well this could be going on. This is something you could do. You could be discussing with your neighbors a true American view of law and government, and then discussing how that could be applied. And then you could be reading the Grey Book too as well which is also a great vision for how, for what a civil government should look like in America. This is a 12 week course of study, excuse me, it is 12 lectures, we do it every 12 weeks but you could do it faster or slower. But it is I believe a great party building or organization building tool because it creates the commonality of understanding on which we’re going to march forward, that is to say, there is an American view of law and government and a biblical view that we need to understand. So that’s what our U.S. course is about.
We actually conduct it three ways, we conduct it live in person in Pasadena, MD, Pastor David Whitney, myself and some other instructors give this class. It’s conducted around the country by people who take this kit itself and do it. This is like a turnkey operation here, you can take this and use the student manual, there’s a teacher’s manual, it’s like a home school course on the U.S. Constitution and American history. We rehearse what an American view of law and government looks like, like I’ve just been doing. We talk about the religious belief of the founders, we talk about the biblical beliefs of the founders and the political philosophy of the founders. Then we talk basically about the Constitution in the words of the Constitution itself. In other words, ‘thou shalt know the rules.’ And then we talk about how courts have degradated and moved away, and subverted the Constitution, and we talk about ways we can move back to this biblical understanding.

Peroutka is emphatic that reform of the current nation is not the purpose of studying the current Constitution. He believes along with the League of the South that this “regime” will collapse leading to secession or some other situation. Those who have studied the IOTC course will have a “commonality of understanding” to support the new order which will be based on Peroutka’s understanding of a biblical view of law and government.
Peroutka also mentions The Grey Book in his speech and calls it a vision for what American civil government should look like. This a reference to The Grey Book: Blueprint for Southern Independence published by the League of the South. I can’t cover the entire book, but I will point out that Peroutka’s and the League’s vision of civil government does not include the 14th Amendment. Speaking of that amendment, the League wrote:

Revolutionary interpretation of the amendment have turned Lincoln’s egalitarianism into rights-based social policies. The evil genie of universal ‘human rights,’ has been let out of its bottle and will never be put back in; ‘rights’ for women, racial and ethnic minorities, homosexuals, pedophiles, etc. are being manufactured in a never-ending, and never to-be-ended, series.

The Grey Book calls for a return to the US Constitution prior to the addition of the post-Civil War Reconstruction amendments and more provocatively adds a reference to the Confederate Constitution. On page viii, the aims are described:

The Grey Book is based on the following presuppositions: 1) that we who oppose on moral grounds the practises and polices of the US government have a duty to reform or remove ourselves from it; 2) that the government of the US is beyond reform, so that the only option available is removing ourselves; 3) that two or more Southern States will at some time in the future form a confederal union; and 4) that their representatives will ratify a Constitution more or less like the US Constitution of 1788 and the Confederate States Constitution of 1861.

The IOTC course is showing up all over Ohio. Here is a list of places it has been offered just in the Dayton-Springfield area this year. Liberty University is offering it on their television network.
One may examine the outline of one of the forms of the course here.* There are many of the usual claims made by those who support a Christian nationalist perspective. For instance, according to one handout, the principles of the Preamble to the Constitution come from the Bible, and another handout lists Bible verses which are claimed to be the basis for American laws. David Barton’s “Keys to Good Government” DVD is used along with John Eidsmoe’s materials on God and government. One handout comparing America to the communist manifesto claims:

Americans are being taxed to support what we call ‘public’ schools, but are actually “government force-tax-funded schools ” Even private schools are government regulated. The purpose is to train the young to work for the communal debt system. We also call it the Department of Education, the NEA and Outcome Based “Education” .

Then there is the comparison of two worldviews: 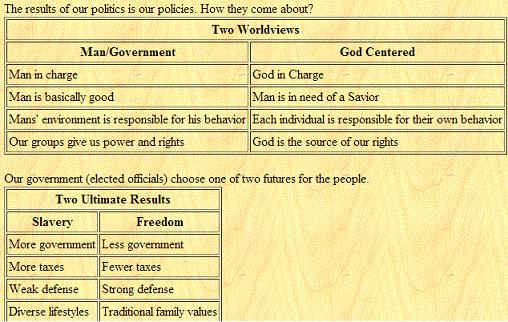 Overall, the course outline reads like an alternative reality version of the Constitution. While I suspect there are some accurate elements to it, efforts to proselytize and indoctrinate students in an Christian nationalist view are clear.

Regularly, the course goes far beyond an understanding of the Constitution as it is and has been amended. From the outline, it appears that the course presents the Constitution and American government as the authors wish it to be. Given Michael Peroutka’s views of the “current regime,” it becomes clearer why the course is presented as it is.

*It has been pointed out to me that the content of this course may not be the same as the one conducted by IOTC staff. I am looking into the possible differences between the course as offered by Peroutka and Whitney and that which is offered by facilitators, such as in Ohio.

Update: It is fitting to point out that today is the anniversary of 14th Amendment. (Hat tip to John Fea). I bet the League of the South is not celebrating.