Speaking of David Barton and the Constitution, I learned yesterday that the Springboro School District plans to offer a summer course on the Constitution taught in part by Barton via video.
Here is the brochure advertising the course: 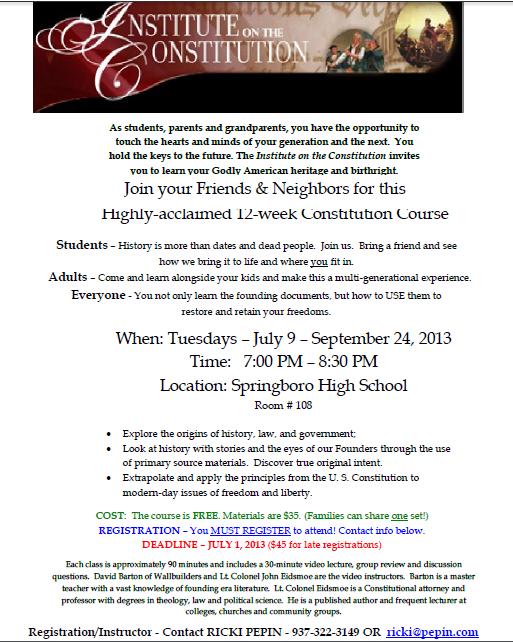 John Eidsmoe was Michelle Bachmann’s mentor* at Oral Roberts University and Ricki Pepin runs something called the Institute on the Constitution. Pepin’s website leaves no doubt about the type of course being offered.  She says she provides “educational opportunities for learning about your American and Christian heritage.”  Here course is different from other courses, which just teach the Constitution.  Her course teaches kids how to think biblically.

GROUP CLASS DISTINCTIVES – Why are we different from other Constitution courses?
Restoration begins with education.  The root meaning of the word “education” is to “pour in and draw out.”  We pour information and knowledge in, but unless we understand and know how to practically apply it (draw it out), true education has not occurred.  Educated activism, therefore, is the key to restoration of America to her principled roots.  For this reason, our Constitution course teaches you how to USE this document, not just learn its contents.
Other Constitution classes – Hillsdale College, National Center for Constitutional Studies, Heritage Foundation – are good entry level classes to learn the basics of the Constitution, to set the foundation.  But, when we build a house, the foundation is just the beginning.  If we build no house on top of it, the foundation is unused and will never fulfill its intended purpose – to provide a home and shelter for a family.  Likewise, if we are to restore Constitutional law to this country, we DO have to lay the foundation, but then we have to BUILD upon it until we learn to USE it for its intended purpose – to protect and defend individual’s right to life, liberty and property.
The IOTC class is a 12-week course on the Constitution, with three important distinctions from other Constitution classes:
First distinction – We begin with history.  It has been said that history is to a nation what memory is to a person.  If a person has amnesia, they are living in absolute confusion.  They don’t know who they are, where they came from, what they believe in, what’s important to them, what their hopes and dreams are for the future.   The same confusion reigns in a nation where citizens don’t know their history.  It’s where we are today as a nation, lost and confused, not knowing where we came from, or where we’re going or what vehicle to use to get there.  Our Constitution classes will show you.  We teach the history of law and government as it originated from God as recorded in the Bible. Going forward, we trace the progression of this foundation through Columbus, the Pilgrims, our founding fathers and we study their belief systems.  As students learn these foundations, they begin to see our nation’s history as part of who they are.  They begin to see it as their HERITAGE, their inheritance.  It’s truth.  It’s powerful.  It’s motivating.  It gives individuals a sense of their purpose and destiny as Americans.
Second distinction – We teach how to USE the Constitution.  After laying the historical foundation, we do teach the Constitution, but we don’t just teach about it.  We relate its principles to current events during class discussions.  There is much interaction and many, many opportunities given for application of what the students are learning. Because of the first distinction – their knowledge of their heritage and ownership of this nation – many, many of our graduates get very involved in their local communities.  Some of them are running for offices we didn’t even know existed before like Precinct Committee Chairmen.  Others are attending various city, county, state board meetings, and offering Constitutional solutions to the problems discussed at these meetings, not just venting another opinion.  Still others are starting up citizen action groups to hold their elected officials accountable.
Third distinction – We teach students HOW TO THINK.  While teaching the Constitution, we help the students turn on their brains.  We show them how to reason through current events from a Biblical and principled foundation, so they will not be deceived by the media or anyone else. How do we do this?  By introducing them to the Principle Approach to education (the method used by our Founding Fathers).  Defining our terms from Noah Webster’s original 1828 Dictionary, asking leading questions, using primary source documents, what the founders themselves wrote, not what somebody wrote about them.  This method of learning is incredibly thought-provoking and exposes principles and truths that are then applied to our modern-day government situations.
Won’t you join us in this movement of educated activism?  – The Constitution cannot defend itself.  We the people must do it.  No matter who we elect, educated patriots must hold our leaders at every level of government accountable to the Constitution.  We can’t do that if we don’t know what it says.  Join me and other IOTC graduates in the cause of preserving our God-given liberty and restoring our Constitutional Republic.   If you don’t, who will?

When the state of Ohio passed a law requiring schools to teach about the founding documents, I wondered if the stage was being set for the introduction of Barton’s materials into the classroom.  These summer courses are supposed to be evaluated for use in the school system to help meet the requirements of the law. There is another one day course apparently written by Cleon Skousen (one of Glenn Beck’s favorites) which will also be evaluated.
It is clear from the promo material and the teacher’s website that the course establishes one particular religious view under the guise of the public school. Furthermore, as regular readers know, the accuracy of the content is questionable given Barton’s video sequences used to reinforce the Christian nationalist teaching.
*Eidsmoe says he deplores racism but has spoken to white supremacist groups. See this article for more…