You had to see this coming.

Parents and Friends of Ex-gays issued a press release today touting a certificate of appreciation given to Regina Griggs by the Mayor of the District of Columbia for her work as PFOX director. The certification lauded Griggs’:

dedication, commitment, and outstanding contributions as Executive Director of Parents and Friends of Ex-Gays and Gays.

Call me a prophet. When I saw that news, I immediately figured that the Mayor’s office would issue a clarification or denial before the end of the day. And lo, and behold, as has been reported elsewhere, Mayor Fenty’s office released a statement apologizing for the certificate, saying in full:

A staff level error was made when the request for the certificate in question was fulfilled. We apologize for the error as it runs contrary to the Mayor’s vision of a more open and inclusive city.

The Mayor is proud of his ardent support of the LGBT community as illustrated in his championing of the Marriage Equality legislation which he signed into law on December 18, 2009.

This full statement, courtesy of Mayor Fenty’s Director of Communications, Mafara Hobson, blames a staffer for the error and indicates he did not know what he was signing.

Some of the confusion could be the inclusion of “gays” in their title. The certificate mentions PFOX as being the Parents and Friends of Ex-gays and Gays. However, their 2008 990 form confirms that the legal name of the organization does not include the gay part. 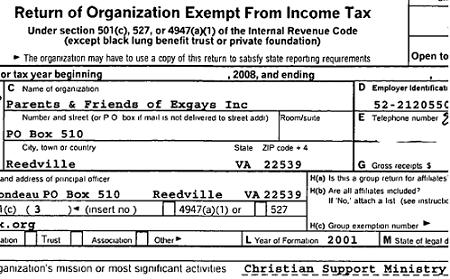 Another interesting point on the 990 is that PFOX reports to the IRS that it is a “Christian Support Ministry.” However, on the Path coalition website, they portray themselves as a non-religious group.