During the Montel Williams Show called Homosexuality…Can it be cured?, Dr. Alicia Salzer said in response to Alan Chambers:

…science has shown us that 96% of people cannot change and along the way, absorb an enormous amount of self-loathing, a lot of confusion, a lot of family conflict, so I know the harm.

Surprised that she would make this dogmatic statement, I contacted the show to ask how she arrived at the 96% figure. The producer Melissa Borusso called to say Dr. Salzer relied on the 2002 study by Ariel Shidlo and Michael Schroeder, titled “Changing Sexual Orientation: A Consumer’s Report” published in the APA journal Professional Psychology: Research and Practice. I am quite familiar with this research. I presented along side Drs. Shidlo and Schroeder at the 2000 APA convention in Washington DC, where they 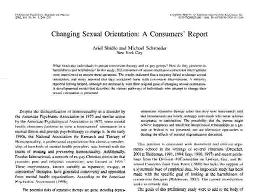 made their results public in a symposium titled “Gays, ex-gays, and ex-ex-gays: Examining key religious, ethical and diversity issues.” The symposium was organized by Mark Yarhouse and also included a presentation by Doug Haldeman. The Shidlo and Schroeder study is valuable in that it provides documentation that some efforts to reorient sexuality may have harmful outcomes for some people.

The data presented in this article do not provide information on the incidence and the prevalence of failure, success, harm, help, or ethical violations in conversion therapy. (italics in the original, p. 250).

Exactly. Probability of change cannot be gleaned from this study. The cautious rendering of the research would be that some people report being harmed and some people report benefit from efforts to modify aspects of their sexuality. At present, we do not know with precision how likely either outcome is to occur for anyone.

After hearing from the Montel folks that Dr. Salzer relied on Shidlo and Schroeder for this authoritative sounding figure of 96%, I remembered seeing how she arrived at this figure in her video, Abomination: Homosexuality and the Ex-Gay Movement. First, the stage is set with on-screen appearances from Dr. David Scasta and Dr. Robert Spitzer. Dr. Scasta describes how the scientific community reviews data to come to a consensus about an issue and then says, “what’s been coming out of the consensus is that much of the data coming out of the Christian right groups is really not scientific.” Now I do not completely disagree with this statement because the 30% figure that is often used is an educated guess based on clinical experience of certain reparative therapists as well as research on methods that are not used frequently (e.g., aversive conditioning) or widely (traditional psychoanalysis) in the present. Also, it is not clear that all studies or therapists use the same definition of change or success. However, lack of knowledge does not mean that number is incorrect, it means we don’t know. 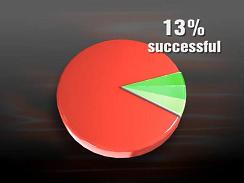 Following Dr. Scasta is Dr. Spitzer who says, “The people who do this therapy claim that about a third make a substantial change in behavior and feelings, I very much doubt that that happens.” Bob has been on the record with this point before.

If the film had stopped there or simply said, we do not know how frequently change occurs, I would not be writing this post. However, following the introduction of doubt about the numbers offered by “the Christian right,” Dr. Salzer’s video segues to Dr. Ariel Shidlo and a description of his 2002 report.

We decided to do research on the effects of conversion therapy, because at the time there wasnâ€™t a lot of scientific data about it. We interviewed 202 people who had undergone conversion therapy. Only 13% of those had felt the therapy had been a success. When we took a closer look at that 13% we found some very interesting things. 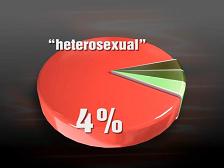 With this prelude, Ariel Shidlo describes his study with Michael Schroeder. Recall that Shidlo and Schroeder said their report does not provide data that could address prevalence of harm or benefit, and yet the video spent much time reviewing prevalence of different outcomes. While the film does not say what Dr. Salzer said on Montel, it does provide numbers that appear to be authoritative, especially in the context of disparaging estimates attributed to the “Christian right.”

First, Dr. Shidlo notes that 13% of the participants said they benefitted from their therapy experiences. From there, Dr. Shidlo partitions the 13% into those who were still struggling, single and celebate and finally, the 4% of their group who viewed themselves as heterosexual. The video depicts an 87% failure rate. On the Montel show, Dr. Salzer moves the failure rate to 96%.

In my opinion, the Montel Show should retract Dr. Salzer’s statement and I have asked them to do so. While I recognize there are problems with how research is used by the ex-gay movement, the Montel quote is also a significant misuse of research by a psychiatrist and in then to a lesser degree by an association of psychiatrists via the Abomination video as well.

Note: All graphics are from the video Abomination: Homosexuality and the Ex-gay Movement

UPDATE: An op-ed on this subject is posted on DrThrockmorton.com.