Well, not that much of a wrap up really.

The original resolution language that drew the ire of the American Family Association was not passed. However, the substitute language was passed. It will be reported in the press two ways: one, that the language was sent back to committee at the request of the Alabama delegation and two, that the substitute language supporting civil unions and gay marriage in the states already recognizing them did pass. Both apparently are true. Only in the NEA can something pass and still be referred to committee after it passed. I am told that is what happened in this case. Here is my guess: The AL leaders needed something to offset a rebellion back in Sweet Home.

No word as yet from Wayne Besen with his accounting of the fracas on the convention floor last Saturday. Strange to me that Wayne has not commented. Here is a pic of Wayne (left) and Greg (right) discussing things. 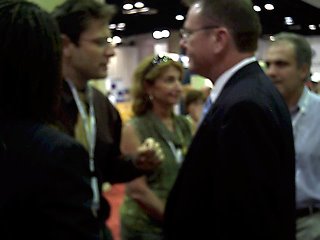