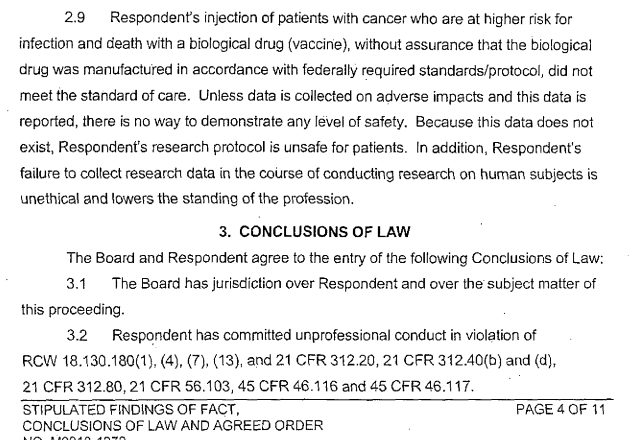 Catanzaro is pretty brazen; he still has to apply for reinstatement and yet he is counting his vaccines before they are hatched.

The naturopath that Mark Driscoll called his physician can apply for license reinstatement when his suspension ends in January 2015. The order was announced by the Washington Department of Health yesterday and was the subject of a Seattle Times article posted last night.

OLYMPIA — Snohomish County Naturopathic physician John A. Catanzaro (NATU.NT.00000769) has reached a settlement with state health officials to resolve charges against his license.
Catanzaro, whose license was suspended in January 2014, will remain suspended through at least Jan. 29, 2015. He will be on probation for at least eight years when his license is reinstated. Catanzaro didn’t follow appropriate protocol for implementing cancer research on people, and misrepresented to the Board of Naturopathy that he had the Federal Drug Administration approval required for experimental medications. He also failed to meet the standard of care by breaking applicable laws that govern safe and effective research on people. Catanzaro gave unapproved cancer vaccinations to cancer patients and didn’t get approval from an institutional review board.  In addition, he didn’t properly keep and maintain patient records.
The statement of charges, summary action order, and settlement are available online by clicking “Look up a health care provider” on the Department of Health website. Copies can be requested by calling 360-236-4700. That’s also the number to call to file complaints against health care providers in Washington.

The order outlines the charges against Catanzaro. Despite proclaiming his innocence, Catanzaro stipulated to the findings of the investigation and the order and acknowledged that the cancer vaccines he made were not part of a research program and were not even made in a lab. Some of those findings involved deception about what he was doing when making cancer vaccines. 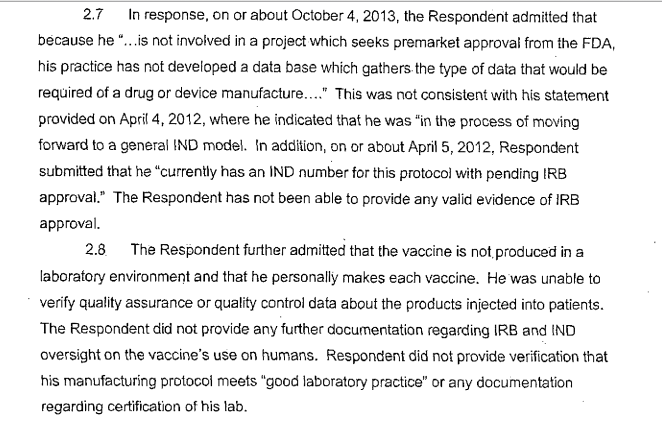 I was disappointed to see that there were no findings of fact regarding Catanzaro’s claims that he was collaborating with the Dana Farber Cancer Clinic at Harvard. Catanzaro told patients that Dana Farber would provide lab work and took money to pay for the lab work. Dana Farber denied any working relationship with Catanzaro.
In addition to the suspension and probation, Catanzaro will have to payback some money. He collected thousands from people without giving them a vaccine. 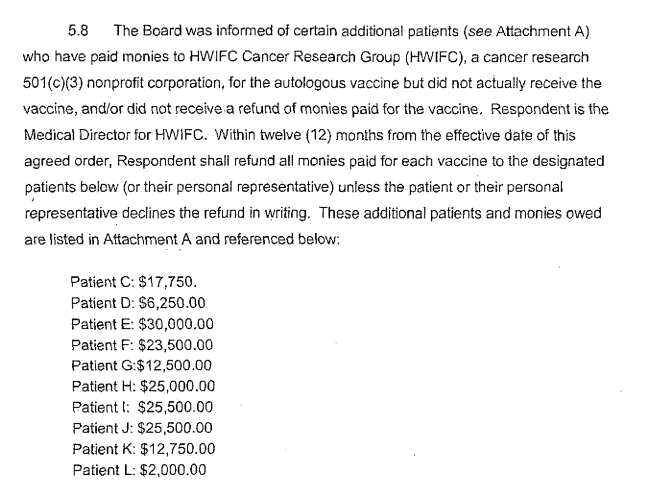 This adds up to $180,750 that Catanzaro has to repay as an aspect of license reinstatement.
If he is reinstated, Catanzaro’s probation will last 8 years. Although it is unclear when the benefit stopped, Catanzaro until recently administered the wellness program for Mars Hill Church’s lead pastors.