Robert Morris has built a megachurch in Southlake Texas which has been rated as the third largest church in America.  Given that significant accomplishment, it seems that self-inflation would be unnecessary. However, in his upcoming book published by the Thomas Nelson imprint of HarperCollins Christian, Morris includes a version of his bio which includes a description of a “doctorate of literature” he claims he holds.  See below from the upcoming book, Truly Free: 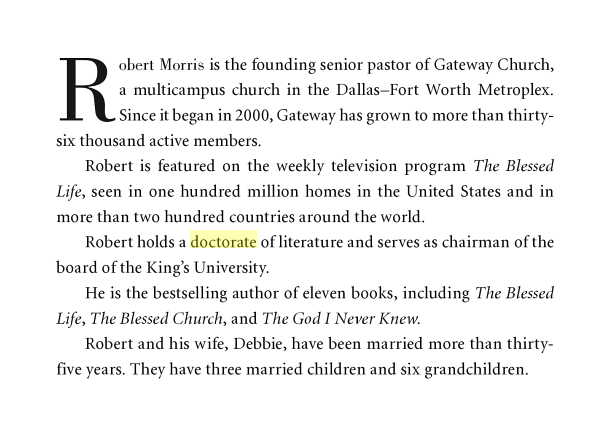 I wrote the church and Thomas Nelson to ask if this “doctorate of literature” was an earned doctorate. Repeated requests were not answered. This “doctorate” is most likely to be an honorary doctorate of letters given to Morris by the small Bible school housed in his church — The King’s University. Morris is currently the chair of the board of the school.
An earlier 2011 bio described Morris’ doctorate as a “doctor of letters” awarded by TKU. This would have been about a year after TKU’s board awarded it to him. 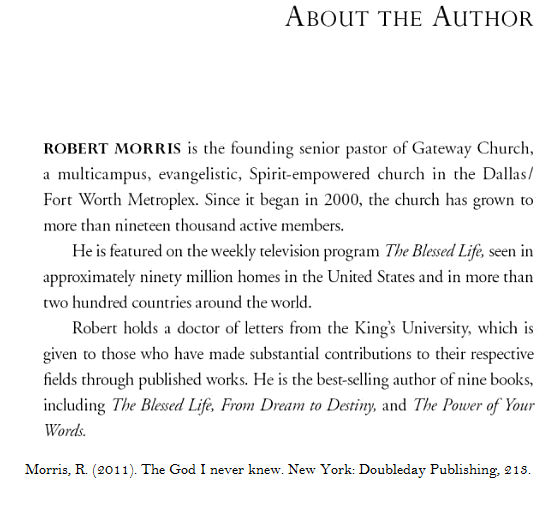 This description of the doctor of letters is closer to the reasons why such honorary degrees are given. However, this bio is still misleading. According to Morris, his main work, The Blessed Life, was ghostwritten. He told his Gateway audience in January of this year that a member of Gateway (David Holland), wrote the book based on on recordings which Morris made in a hotel room.  He said the ghostwriter helped him with several books. As it turns out, Morris was given an honorary doctorate for writing books he didn’t actually write.
I understand that many celebrities don’t write their own books, but it is misleading to consider those celebrities to be accomplished writers. They may have good ideas and have enough money to afford to pay a good writer but those books aren’t representative of the author’s writing ability when the listed author didn’t write them.
So in his new book published by Thomas Nelson/HarperCollins Christian (as well as the bio on the church website), Morris claims to hold a doctorate of literature when in fact, he was given an honorary doctorate from his own school for books he didn’t write.
When it was discovered that Mark Driscoll’s book Real Marriage achieved New York Times best seller status via a marketing scheme, Driscoll stopped using “NYTs best selling author” as a description. That was a commendable move. Of course, the proper thing to do for both publisher and author is to present an accurate description to the public.
The ongoing story of Christian authors embellishing their reputations demonstrates the importance Christian leaders place on peripheral persuasion. Perceived expertise is one of several powerful factors operating via the peripheral route to persuasion. Persuasion theory posits two primary routes to persuasion — central and peripheral. In central route strategies, the persuader offers facts and figures with accuracy being important. An assumption is made that the audience is motivated to carefully consider arguments for and against a proposition.
However, in peripheral route strategies, the assumption is that the audience isn’t highly invested in the process but will nonetheless make a decision or render an opinion. Peripheral route tactics influence people to say yes or make a decision for reasons other than the merits of the case. In the situation above, the publisher and author have embellished credentials to communicate expertise in the service of selling books. There may be more personal motives but the effect is that audience members who are motivated by perceived expertise will attribute expertise to Morris due to the embellishments.
Unfortunately, it appears these kind of tactics are embedded features of evangelical and conservative expressions of Christianity.
UPDATE: Just found this article by Phil Cooke on honorary degrees. Bottom line: One should not refer to the degree as if it was earned, or use Dr. in reference to oneself unless one has an earned doctorate.