About an hour ago, The Village Church in Dallas-Fort Worth announced that they plan to spin off five campuses into autonomous churches.

@MattChandler74 shared some big news yesterday about the next step in gospel-centered multiplication at TVC. https://t.co/Oh4Y0JmaJr pic.twitter.com/4DPxXqPZkk

Watch the video description on the church website (the longer sermon about multiplication is on the church’s Youtube page).
The plan includes:

According to the church, this plan has been part of the wishes of the elders for several years. The church leaders feel that now is the time to implement the plan. From the church website:

A few years ago, the elders shared their conviction that the Lord was leading us to transition our campuses into autonomous churches, beginning with the Denton campus, a conviction that had been developing for several years. There was not a specific timeline in place for the other campuses; instead, we would rely on the Holy Spirit and when it felt right to do so. We feel that the Lord has made the timing clear to us now and we plan to transition all the campuses within the next five years.
Establishing a timeline allows us to share it with the staff and the church at large so that we can all pray and plan together. We also believe that campus rolloffs will lead to better, more contextualized ministry for our campuses and our cities, and we want to get to that reality as soon as is sensible. It also gives an answer to succession, helping us to be proactive rather than reactive about it. And, of course, it is an outworking of our mission statement.

Will The Village Church Enable a Trend?

Mars Hill Church comes to mind as a church which went from one video pastor based church to a group of independent churches. Of course, that move happened because the mega church became unsustainable after the demise of Mark Driscoll’s work there. I have heard that Gateway Church may also move this direction. I hope the next wave of church evolution is away from a centralized mega church and to smaller, more intimate and accountable organizations. 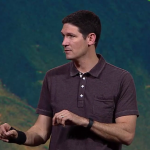 Today, amid the storm of controversy over the church’s handling of Jordan Root and Karen Hinkley, Matt Chandler expressed remorse over the church elders’ general approach to church discipline. I wrote about this matter in a prior post.
Video of the sermon is on the church website and Vimeo below.
[vimeo]https://vimeo.com/129371788[/vimeo]


Chandler spent much of the message talking about handling conflict between believers. He said (at 24 minutes and following) the matter of church discipline is serious because at the final stage of church discipline, when a church releases a member, the church is saying, “We are no longer able to affirm that you are a believer in Christ.”
One of the reasons I don’t like detailed covenant statements for members is that some people disagree over doctrine and if a member doesn’t come into line, the church is put in the position of saying explicitly or by implication, because you don’t agree with us, we can’t affirm you as a believer.
Chandler said that the process of evaluating church discipline began several months ago. As a result, Chandler said the elders decided that they had “failed to fulfill our covenant promises to you as members to lovingly exercise church discipline when necessary” and asked the audience to forgive the elders.
He said there are five specific things which require forgiveness:
Will you forgive us where our counsel turned into control?
Will you forgive us where we failed to recognize the limits and scope of our authority?
Will you forgive us where we allowed our policies and process to blind us to your pain, confusion and fears?
Will you forgive us where we acted transactionally rather than tenderly?
Will you forgive us where we failed to recognize you as the victim and didn’t empathize with your situation?
I’ll bet that was hard for Chandler to do. Now comes the harder work.
If these matters are being taken up with individuals, then I think this is a major step forward. It is hard not to compare to Mars Hill Church’s response to similar concerns, and in that comparison, Chandler’s approach is much better and more to the point.

UPDATE: Christianity Today is reporting this evening that Matt Chandler, pastor of The Village Church, plans to apologize to his church this weekend during Sunday services. He gave CT some comments which indicated that he believes the elders were “domineering” and “sinned against some people.”
Matthew Paul Turner has an email he says is an apology to the Village Church members from the elders. It appears that The Village Church elders have made a better move.
……………….
This post will be of most interest to those who have been following the controversy involving The Village Church and a former missionary couple, Jordan Root and Karen Hinkley (formerly Karen Root). I have received several requests from readers to comment on the matter. I will briefly summarize but to really get up to speed, there are several lengthy documents which must be read (see links at the end).
The Roots were missionaries to Asia with Serving in Mission (SIM) and supported by The Village Church beginning in August 2014. In December, Jordan Root confessed to his wife that he was attracted to minors and had used child pornography for years. This admission set off a cascade of events including return from the mission field, an FBI investigation, and Karen having the marriage annulled. She also left The Village Church which has become a major point of contention with the church as the church covenant doesn’t allow members to leave which under church discipline. According to the church, Hinkley is under church discipline because she completed the process to have the marriage annulled.
As I understand it, Mr. Root has not contested his ex-wife’s claims and the The Village Church has allowed him to attend as long as he avoids children and is supervised. The church considers Ms. Hinkley to be under church discipline and sent a letter to their 6,000 members advising them of their action toward Ms. Hinkley. Ms. Hinkley said she made the matter public because she was concerned that Mr. Root might have sexually offended in past positions where he was in the company of children and because she believes The Village Church is overstepping proper boundaries by trying to keep her as a member and by placing her under church discipline.
First, it is tragic that any of this is happening and I have prayed every day for everybody involved.
Second, I read on one of the blogs that the church had been criticized for not contacting former employers or families where Mr. Root had worked with children. In this case, I think caution is in order. The research of psychologist Elizabeth Loftus provides ample evidence that communications with young children can trigger recollections of events which did not happen. The “lost in a shopping mall” paradigm indicates that such contamination can occur in older people too. People can be induced to believe misinformation depending on how questions are asked. Experts in memory and working with children should be consulted on this point.
Third,  I can’t discern if Mr. Root has been involved with experts in sexuality and sexual orientation. Most counselors are not equipped to help people who struggle with this problem. Mr. Root should be in touch with a trained and experienced professional in addition to whatever spiritual care he is getting. There are also support groups of adults attracted to children who work to help those who struggle not become sexual offenders.
Finally, The Village Church’s allegiance to the man-made church covenant is such an overwhelmingly unimportant distraction to the repair of these two people. Karen Hinkley needs to leave the church in peace and Mr. Root needs for this to leave the public square.
There is precious little in the New Testament about church membership and nothing that I can find about signing a perpetually binding church covenant. I will grant that some instructions to the early church imply some kind of affiliation with a local body of believers, but we have no instruction about church forms, covenants, by-laws and/or constitutions.
For what it is worth, I got a Mars Hill Church feeling when I read this:

Karen has been through a terrible experience due to Jordan’s sin and wants to heal in her own way. Why are we continuing to pursue communication with Karen or even trying to minister to her if she does not want us to do so?
This is a tragic situation, and we are grieving with Karen. While the wounds of sin may be deep, Scripture states that the best care and counsel comes from the hope and comfort of the gospel, through the ministered Word in the care and community of the saints, particularly the local church. In our Membership Covenant, we articulate this belief and covenant with our members to be there for them in any type of situation, good or bad, including dealing with the aftermath of a spouse’s sin. In signing that Membership Covenant, a member agrees with that belief and covenants with us to receive that care. In essence, by signing the Membership Covenant, Karen asked us to minister to her in good times or bad, regardless of what might come.

As a Christian just watching this train wreck from afar, let me add my voice to the chorus of other believers asking The Village Church to let it go. Ms. Hinkley has been through enough without having to fight people who say they are serving her.
To conclude, I will refer back to thought number one above.
For reference see:
Watchkeep Blog’s initial post on the matter.
The Village Church letter to members.
Karen Hinkley’s response to The Village Church letter about the situation.