Monday, I wrote about a new book by Debbie Nathan which examines the famous multiple personality case of Sybil, a young woman who claimed 16 personalities. For her book Nathan reviewed the notes of Flora Rheta Schreiber, the journalist who collaborated with Sybil’s psychiatrist Cornelia Wilbur in order to turn the case of Shirley Ardell Mason (Sybil’s real name) into a media sensation. Nathan’s findings debunk the claims of Wilbur and expose the distortions and fabrications which led to the famous case. In looking into Sybil’s history, Nathan also takes a long look at psychoanalyst Wilbur. It turns out that multiple personality was not the only controversial diagnosis Wilbur treated.

While Wilbur was discovering Sybil’s personalities, she also collaborated with Irving Bieber on his study of male homosexuality. Wilbur was one of nine co-authors of Homosexuality: A Psychoanalytic Study, published in 1962. Wilbur also had the distinction of being involved as co-author of the other study of homosexuality conducted by the Society of Medical Psychoanalysts published in the 1960s. Wilbur worked with psychoanalyst Harvey Kaye on a team to research female homosexuality, at the time reporting that half of subjects changed orientation.

With the publication of Sybil by author Flora Schreiber, Wilbur became famous. However, the book about Wilbur’s patient Shirley Mason was not the first collaboration between Wilbur and Schreiber. According to Sybil Exposed, Wilbur and Schreiber met when Wilbur was pitching the findings of the 1962 Bieber study. According to Nathan, Wilbur claimed that the Bieber study reported the causes of male homosexuality and boasted of the 27% cure rate as the result of work with analysts like Wilbur.

Schreiber, a free lance writer, was interested in the research and pitched the idea of a story on the subject to several magazines. Cosmopolitan accepted the pitch and assigned her to write a story about a mother with a gay son “eager to help him go straight.” Schreiber then asked Wilbur for a case which could be turned into an article.

According to Nathan, Wilbur turned over information about Case 129 from the Bieber study. You can read about this case on pages 54-58 of Bieber’s 1962 book (click the links to read it – A, B, C). The case is important for two reasons. One, Schreiber did not like it because the main character was an adult and she was assigned to write about a mother and teen son. Two, according Nathan’s research, the case may have been a thinly veiled reference to Wilbur’s work with actor Roddy McDowall.

After summarizing Case 129 from Bieber’s book, Nathan connects the dots,

The public knew that Roddy McDowall’s father had worked on ships. They knew his mother had pushed him into voice lessons and Hollywood, and that he’d later moved to New York and found success in show business. What McDowall never talked about openly was that he was gay and that after arriving in New York he’d begun an affair with the charismatic, bisexual actor Montgomery Clift, who was eight years his senior and a raging alcoholic. When Clift called off the affair, McDowall tried to kill himself. These facts did not become widely known until after McDowall died in 1998.

Indeed, McDowall’s homosexuality was considered an open secret and one Clift biographer, Patricia Boswell, said that McDowall was suicidal after a breakup with Clift.

However, since Schreiber needed a teen-aged homosexual, the case, no matter how interesting, had to be altered. So, according to her own notes, Schreiber changed the subject of case 129 into an adolescent, Don, who tearfully confessed his homosexuality to his mother, Eve, in a fit of desperation. In the first draft of the article, according to Nathan, Schreiber used many of the details from Wilbur’s case 129 except for the age of the young man.  The adolescent boy attended psychoanalysis with Wilbur, who explained the causes of homosexuality right from the Bieber study. Unfortunately for Schreiber, this clinical tale did not suit the Cosmo editor who insisted on changes just before going to press. Nathan writes:

One afternoon just before press time, Flora was summoned to Cosmopolitan’s offices on Fifty-seventh Street. When she got there she was informed that her piece was not acceptable. Eve, the homosexual boy’s mother, was overly intelligent, and her son, Don, seemed too sophisticated. The editors and printers ordered Flora to do an immediate rewrite. She sat down and worked as fast as she could.

The result was an article which was published in January, 1963 under the title, “I Was Raising a Homosexual Child” (click the link to read it on Google books). In this fabrication, Don’s homosexuality was revealed to his parents by means of a phone call from police. Don had been arrested for cuddling with another man in Central Park. However, Schreiber maintained the same causal narrative about smother-mothers and distant fathers advanced by the Bieber book. In the story, the fictional Don saw Dr. Wilbur for psychoanalysis and eventually decided that he didn’t really like guys after all. The Cosmo piece reads like a promotional piece for Bieber and Wilbur’s book, which is apparently what Wilbur hoped for. According to a letter from Wilbur, referred to by Nathan, Wilbur said Schreiber “had gotten things right” in the Cosmo article. Wilbur then thought of Schreiber when it came time to pitch the book about her multiple personality patient, Shirley. 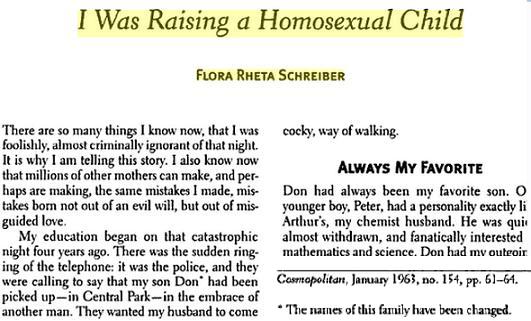 (Note that the article says the names have been changed, implying that the case was real.)

There are many other shocking details about Wilbur’s work with Sybil detailed in the book. For instance, Wilbur supplied Shirley/Sybil with money and hired her for a variety of projects. One of the projects was typing up the manuscript for Bieber’s book on the study of male homosexuality. Although not mentioned in her book, Nathan told me in an interview that Shirley/Sybil was hired to type the book manuscript and even submitted an idea for the cover art.

So before Wilbur pitched the case of Sybil to Flora Schreiber, there was the pitch to Schreiber about the Bieber study. As it turns out, Sybil was a fictional tale only loosely tied to Shirley Mason. However, Don, the allegedly “cured” homosexual, was a complete fabrication.

The Bieber study is at the heart of the reparative narrative about the cause of homosexuality. Many articles on The National Association for the Research and Treatment of Homosexuality website refer to Bieber’s findings as authoritative. Most observers outside of NARTH dismiss the study as hopelessly subjective and flawed. However, for those inclined to give it weight, the study rises and falls on the credibility of the reports from the psychoanalysts who contributed cases since the patients were never surveyed. With the publication of Sybil Exposed, it is now reasonable to call into question the credibility of those reports.
“Sybil Exposed: The Extraordinary Story Behind the Famous Multiple Personality Case,” by Debbie Nathan, is published by the Free Press and went on sale this week.

Additional note: After Wilbur died, Richard Kluft edited a book on multiple personality disorder and included a tribute to Cornelia Wilbur. Wilbur’s work with Sybil and other patients changed the way dissociative states were treated. An interview with Wilbur is included in the opening pages of the book. Here she notes the connection of the Cosmo article on Don, the fictional cured homosexual, and her decision to use Schreiber to write Sybil.

Note Wilbur says that Schreiber got everything right. 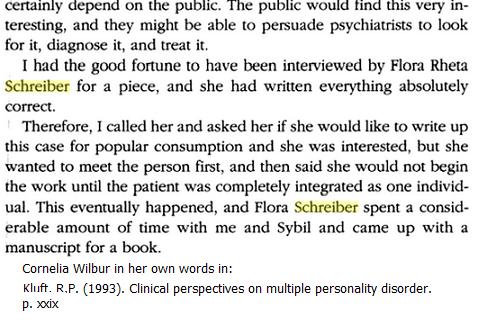