UPDATE 2/3/16: The source of the story that Marco Rubio’s campaign told caucus goers that Ben Carson dropped out of the caucus now says his tweet was a mistake and based on other tweets he saw the night of the caucus. See information at the end of this post.
………………………..
This morning Ben Carson is calling on Ted Cruz to fire any staffers who told Iowa voters that Carson dropped out of the campaign.
Carson announced Monday that he was going to Florida after the caucuses but later clarified that he needed to go home for fresh clothes and was not dropping out.
According to tweets posted on Monday night, the rumor quickly circulated that Carson was suspending his campaign. Some of those tweets pointed to unnamed persons within the Cruz and Rubio campaigns as pushing the story that Carson was ending his campaign.
This tweet points to Cruz’s campaign:

Cruz campaign trying to get word out to caucus goers that Ben Carson is basically dropping out.

Mr. Locker later told me via twitter that Steve King, Cruz’s national co-chair, was tweeting about Carson dropping out before the caucus event started.
Here is that tweet:

Carson looks like he is out. Iowans need to know before they vote. Most will go to Cruz, I hope. https://t.co/lW5Js50EMA

Rubio campaign pushing the narrative hard that Carson is dropping out. Obviously looking to pick up votes from Carson. #iacaucus

(Conrad Close has now deleted this tweet and said it was a mistake. Please see the updates below). 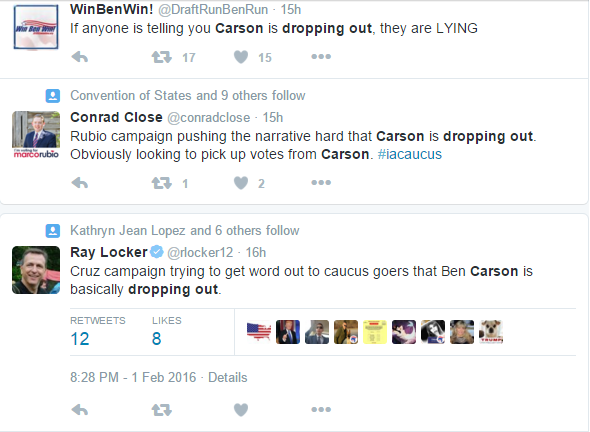 It is unclear whether or not the campaigns knew Carson was going to get clothes or if they simply followed the media reports that Carson might be dropping out.
UPDATE: Cruz apologized to Carson for not relaying a correction to the campaign workers Monday night.
UPDATE: 2/3/16: Now Conrad Close says his tweet was a mistake.

@1stbornAmerican The tweet was a mistake. Carson confused many people, myself included. And I don't work for the Rubio campaign in any way.

I was not in Iowa. That tweet was based off what I saw on Twitter. Nothing more. https://t.co/T79fzov7VY

I am unclear what Mr. Close saw on twitter which would have led him to believe Rubio’s campaign was running with the “Carson drops out” story.