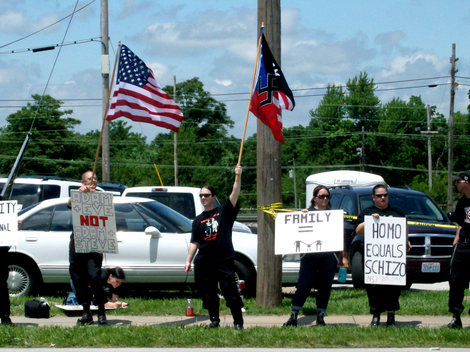 According to video of the event, the National Socialist shouted “death to gays” at their rally.

A festival meant to celebrate the gay and lesbian communities in the Ozarks was met with mixed opinions Sunday afternoon.

The local chapter of the National Socialist Movement made their opnions (sic) heard at Pridefest.

Leaders with the Socialist movement say gays and lesbians are not welcome in Springfield.

The Minutemen United stood just to the side of the celebration.

They say they were praying for God to lift up the homosexual community.

The Minutemen United appear to be a Christian group who were there rallying against gay pride. It is not clear, but it does not appear that the MU were there to protest against the NSM.

The behavior of the NSM raises a significant challenge to the thesis of Kevin Abrams and Scott Lively about National Socialism and homosexuality. Abrams and Lively are founding members of the International Committee for Holocaust Truth. The first report from that small group proposed this thesis:

Hitler’s plans for a “1000 Year Reich,” is a “Homofascist” Conspiracy which still thrives today disguised as “gay” rights.

(Here is a slideshow of the Pridefest and protests)

Update: The Minutemen United is a loosely organized bunch of men who are affiliated with Dave Daubenmire’s Pass the Salt ministry. On the front page of that organization’s website, there is a link to a podcast from Springfield, MO. There intent there was to do street preaching and evangelism at a gay bar and the Pridefest. According to this Springfield News-Leader report, some of the Christian groups, perhaps the MU included, also preached to the Nazis.

Prior posts in this series:

June 3 – Before The Pink Swastika

June 4 – Kevin Abrams: The side of The Pink Swastika

June 8 – A historian’s analysis of The Pink Swastika, part 1

June 9 – A historian’s analysis of The Pink Swastika, part 2

June 11 – American Nazi movement and homosexuality: How pink is their swastika?

June 17 – Does homosexuality lead to fascism?

List of posts on Uganda and The Pink Swastika