Dan Gilgoff, blogger at US News and World Report, is fascinated by the stance taken by Alan Chambers in his new book, Leaving Homosexuality.

What striking is that Chambers is not promoting so-called conversion therapy, which some religious conservatives claim can convert gays and lesbians to a straight sexual orientation. Rather, he acknowledges that, for gays and lesbians, homosexual attraction never goes away. But he suggests that homosexuals can resist those urges through Christianity (this from a Citizenlink interview):

CHAMBERS: The key thought here is the opposite of homosexuality isn’t heterosexuality. It’s holiness. There are people who are conflicted with their sexuality, involved with homosexuality, and there is a way out for those who want it. But it doesn’t say that they’re going into heterosexuality, because that’s not the point. The point is that people can leave whatever it is that God calls less than His best and move into something that is His best, becoming more like He is.

CitizenLink: Now, I’ve heard it, and you’ve heard it: Gay activists are going to read that and say, again, “Alan Chambers is living a lie. He’s suppressing who he really is.” You make a great point in the book that is very applicable to anyone who struggles with any temptation—and that is, self-denial isn’t a bad thing. How do you respond to those who say you’re just living a lie?

This led Dan to interview Joe Solmonese, at the Human Rights Campaign about what seemed to Dan like a new approach. Solmonese said:

“It marks a pretty significant shift in the dangerous idea that the Exodus crowd was putting forward: that it was possible to change and to no longer be gay. They were attempting to do that by shaming people, getting them to deny who they were. Anybody who goes through that process realizes that it’s simply not possible to change who you are. So it marks an important shift that there is an acknowledgment that you can’t stop being gay.

“And I’m going to respect people’s religious views, and if someone says, ‘I acknowledge that I am gay and will always be gay, but am going to live within context of Scripture as I view it and not act on that,’ I think that’s sad—it is denying my view, which is that we are all God’s children and are formed in his image—but at the very least it’s a shift in thinking. It’s not something I agree with but something that I’m willing to respect if somebody else decides to live with it.

“Everybody is entitled to live their lives in the way they see fit. So if [Chambers] is moving to a place that says, ‘This is who we are and who we’re born to be, and it’s not possible to change us,’ then I guess one has to see that as a step in the right direction.”

Dan concludes by wondering if we are nearing some kind of common ground:

But I wonder if Chambers’s and Solmonese’s remarks reflect some common ground emerging between religious conservatives and the LGBT community around homosexuality—one that rejects conservatives’ former support for conversion therapy but also rejects the idea among some gay advocates that conservative religious homosexuals must cast off their faith and embrace their sexual orientation.

Just a note on Alan’s book (which I need to get and read), and a potential retreat from conversion therapy. Despite a more congruence-sounding framework regarding what change means, the reparative narrative is still a prominent aspect of the book (see pages 74-76 – you can search inside at Amazon.com). Many straight men have very similar histories but that is a post for another time. The point is that one oft unspoken bump in the common-ground road is the reparative view that homosexuality derives from trauma — whether it be with parents, peers, or some kind of abuse. As I have discussed here, this is a problem, not just for those on the gay side of the fence, but for evangelical parents of gay children.

Update: Here is a screen capture of the beginning of the Psychological Development section. Alan acknowledges that he is not a psychologist but then proceeds to offer the reparative narrative. 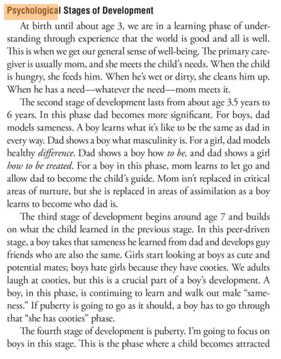