On May 14, I wrote that several Gospel for Asia staff and students had reported to me that they were asked to carry envelopes of cash to India without declaring that cash to U.S. customs. I then reported audio of Gospel of Asia leaders telling staff and School of Discipleship students in a May 14 staff meeting that GFA leaders planned to discontinue the practice of having groups of students take large sums of cash to India in their pack backs or suitcases on group trips. In that staff meeting, a student raised the issue with a question about why GFA leaders required each student on a mission trip to carry an envelope of $4500 cash to India. Amounts ranging from $45,000 to $135,00o (possibly more, I have not interviewed individuals from groups larger than 30) have allegedly been taken to India in this manner. GFA gave no specific reason for asking students to do this, but said their Texas auditor Bland Garvey approved the plan.
However, any cash transfer over $10,000 must be declared via a customs form when leaving the U.S. None of my sources filed any forms on their trips. In addition, GFA on the organization website denies using such means to carry funds to the field, saying (see the underlined sentence): 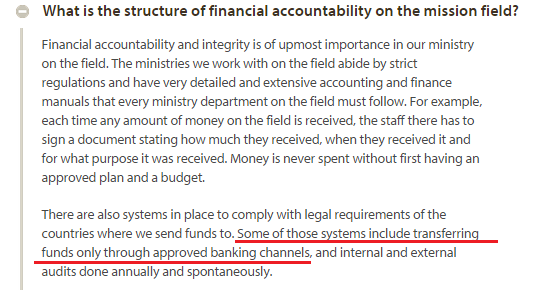 Obviously and by their own admission, GFA leaders did not follow this guideline.
Wanting to understand more about the law relating to cash transfers out of the country, I contacted by phone and email the media relations department of the Customs and Border Protection agency within the Department of Homeland Security.  To the CBP media office, I posed the exact scenario just as the GFA students explained it to me. In response, a CBP spokesperson wrote in an email to describe the relevant U.S. law:

If an individual transports, attempts to transport, or causes to be transported (including by mail or other means) currency or other monetary instruments in an aggregate amount exceeding $10,000 (or its foreign equivalent) at one time from the United States to any foreign place, or into the United States from any foreign place, they must file a report with U.S. Customs and Border Protection (CBP).
This requirement is cited in 31 USC 5316; 31 C.F.R. 103.23 and the Bank Secrecy Act (BSA) of 1970, which identifies the source, volume, and movement of currency and monetary instruments being transported into or out of the United States or being deposited in financial institutions.  The BSA aids law enforcement officials in the detection and investigation of criminal, tax, and regulatory violations.
CBP widely publicizes the currency reporting requirements on its website and through other means in order for travelers to be aware of the requirement to file a FinCen Form 105, Report of International Transportation of Currency or Monetary Instruments (CMIR).  If unreported currency or monetary instruments are discovered on a person or in his carry-on luggage while boarding a departing aircraft this would constitute a CMIR violation.
Dividing currency amongst travelers requires the filing of a CMIR for the entire amount as intentionally aggregating currency exceeding $10,000 to evade reporting is against the law.
As a result of international drug trafficking, the United States and much of the world strengthened currency reporting requirements by enacting laws to counter money laundering schemes such as “Smurfing”.  Smurfing is a form of structuring, or dividing large amounts of currency or monetary instruments between individuals within an organization, with each person or package carrying an amount under $10,000 to circumvent reporting requirements.  Structuring, including “smurfing”, is a violation of 31 USC 5324. (emphasis added)

I then asked the public affairs office at Immigration and Customs Enforcement how their office handles such crimes. A spokesperson told me that no information could be given about current investigations, but persons who wish to pass along information can use the ICE tip line: http://www.ice.gov/tipline.
I also request that former/current staff, students or others who carried cash for GFA contact me via email (click the link).