UPDATE (8/15/14) – A reader let me know that the video update from Mark Driscoll to the church was made private by Mars Hill Church. The transcript is below but the church removed the video. I have edited the video to provide the relevant segment.
…………(original post begins here)
In May 2012, there was a stand off between the City of Santa Ana and the Orange County campus of Mars Hill Church. At the time, Mars Hill was meeting in a concert venue known as The Galaxy (now called The Observatory). According to the city, the venue was located in a zone where churches were not allowed to meet. The city had informed the church and the building owner that a church could not meet in that place but Mars Hill continued to hold services there. Thus, in May 2012 the city threatened enforcement actions. Then on May 27, 2012, the city fined the church and building owner $100 each.
On May 26, 2012, Mars Hill Church posted an update on the situation with Mark Driscoll and Nick Bogardus informing the church about actions taken on behalf of the Orange County (CA) campus. The video of Driscoll has now been made private (not viewable) and Bogardus’ update has been scrubbed from the site. However, you can read it via the Internet Archive. Although the video is missing, several news sources watched it and reported on the story. The Christian Post’s Alex Murashko wrote that Mars Hill pastors were “struggling to understand why conducting worship services by way of rotating into the weekly schedule of an active rock concert venue in Orange County on Sundays is a problem with city officials.” The now missing video was the basis for that assessment. According to CP, Driscoll said:

“I honestly don’t understand this because it’s a concert venue and so it’s a huge room where people come in, a band plays on the stage, and the place packs out with people. On Sunday, a band takes the stage and it fills up with people,” said Mars Hill lead pastor Mark Driscoll during a video posted on the church’s website.
“They say we can no longer use the space. [However,] we don’t have our children in there. They are actually in a separate building next door. It’s not a parking problem. There’s plenty of parking. It’s not a traffic problem. It’s Sunday, lots of accessibility, no issues whatsoever. So, we’re not exactly sure what the problem is. The truth is we’ve been asking a lot of questions and we are not getting a lot of answers,” Driscoll explained.

According to CP, Driscoll then wondered if the church was the victim of religious discrimination:

However, Driscoll said Mars Hill has retained legal counsel, saying it’s needed “if we find that we are just getting bullied by a political discriminatory agenda against Christianity and the church.”
“If we find out as well that it’s just somebody on a council somewhere that has an axe to grind against Christianity we will hold our ground,” Driscoll said. “If we do, in fact, find that somehow we are violating laws and rules that don’t make a lot of sense to us we will obey the governing authorities like the Scriptures say.”

In CP’s reporting of this video (also OC Weekly, and The Blaze), Mark Driscoll appears unaware that the church had known for months that Orange County campus had violated Santa Ana zoning ordinances by meeting in The Galaxy. However, recently former Orange County campus executive pastor Kyle Firstenberg alleged that Mars Hill executive pastors were aware of the violation early on and prohibited the Orange County campus from making a move. In order to explore the various claims involved, I requested relevant documents from the City of Santa Ana and attempted to interview people involved.  On balance, the information I have supports Firstenberg’s account. The rest of this post presents this information.
The original yearly lease between Mars Hill and The Galaxy (owned by Jon Reiser) was signed on October 24, 2011. MHC pledged to pay $8,000/month for the first six months and then $10,000/month for the remaining months.  According to Firstenberg, the city contacted Reiser very soon after the lease was signed with the news that a church could not meet there. Initially, Firstenberg believed that the zoning law might not apply to them since the church was not doing anything at the venue through the week. However, soon Firstenberg understood that the church could not meet in the venue and alerted Sutton Turner, executive pastor at Mars Hill for direction. Firstenberg said that Turner instructed him not to move because the city would not want to risk a public relations problem by acting against the church. I contacted Sutton Turner for his perspective and he declined to comment saying that the issue was a “private matter.”
The documentation supplied by the City of Santa Ana begins in May 2012. However, the May 7 email from Alvaro Nunez to building owner Jon Reiser refers to prior conversations regarding the zoning violations. 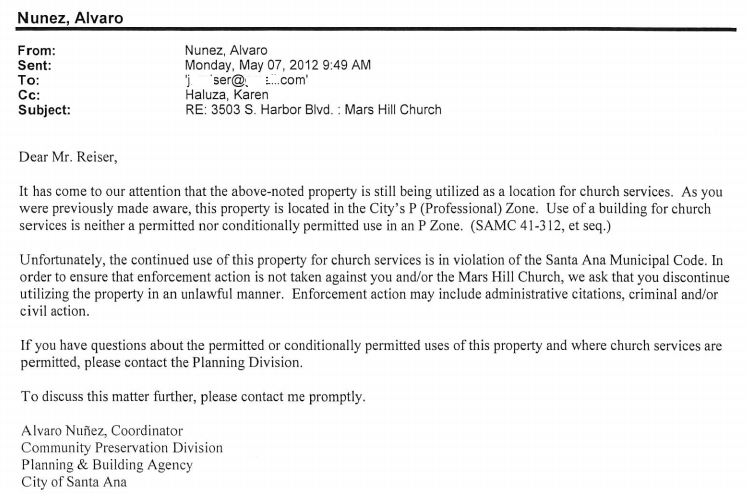 Consistent with Firstenberg’s claims, Alvaro Nunez said in his email that he had previously made Reiser aware that the church could not meet in The Galaxy. I asked the Community Preservation Division representative Paula Courtade when the initial contact was made but she did not know. She told me that she asked Nunez but he could not remember when he first contacted Reiser. Firstenberg believes it was in 2011, with additional contacts in early 2012. In any case, the city had contacted all concerned before the flurry of activity in May 2012.
According to the CP, OC lead pastor Nick Bogardus said Mars Hill knew the church could not continue meeting in The Galaxy:

The city made it clear from the outset that the church could not stay long term, Bogardus said.

The outset was as early as October 30, 2011 when the lease agreement was signed. Bogardus said the city “made it clear” that church was not permitted in that location.
In reviewing notes Firstenberg kept during that time period, it appears that he investigated dozens of locations from late 2011 until he left the church in July 2012. On at least two occasions, the church seemed poised to move to a new venue. In April 2012, Mars Hill executive elder Dave Bruskas signed a letter of intent to occupy the Garden Grove Seventh Day Adventist Church. This document is significant in that Dave Bruskas is one of three executive elders at Mars Hill, the other two being Mark Driscoll and Sutton Turner. Furthermore, on the Mars Hill website, prayer was requested in April 2012 for the location of a new building for Orange County:

Pastor Mark asks for prayer for our five churches that are looking for new buildings: Orange County, Everett, Federal Way, Downtown Seattle, and Olympia. He asks everybody to pray, both individually and as a church family.

In the update video on the site (how long will it be there?), Driscoll told his listeners at 2:20:

Mars Hill Orange County is meeting in a club, the children’s ministry is in another zip code, and we just are losing our lease, and we’re going to be kicked out, and we got a problem, and so we’re going to be homeless like Jesus here very shortly at Mars Hill Orange County. They started on January 15th, they started with 800 people. Only 2% of churches in America are 800 so we rejoice in all that God is doing, but they need a home.

It is obvious that Driscoll was aware that the church could not remain in the location but nothing is said about religious discrimination. As is clear from the documentation (see the documents from the City of Santa Ana here), the religious discrimination narrative emerged in late May when the city got serious about enforcement of the zoning issues which had been in play for months.
As noted above, Alvaro Nunez contacted the building owner, Jon Reiser, on May 7.  On May 8, Kyle Firstenberg wrote both Nunez and Reiser about a possible move to a new location. In April, a letter of intent was executed by executive elder Dave Bruskas and on that basis Firstenberg informed Nunez and Reiser that a move was imminent. According to Firstenberg, Mars Hill executive pastor Turner eventually nixed the deal, leaving them to scramble around for additional options.
According to a May 15 email from Firstenberg to Nunez, the lease was being considered by the Garden Grove church. Then on May 23, Nunez wrote Firstenberg to inform him that church services must cease at The Galaxy/Obsevatory location. The email threatened enforcement action if the church did not comply. 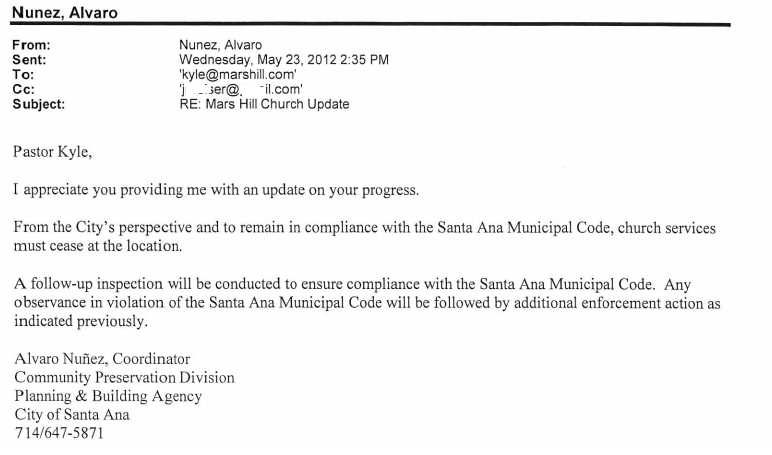 Then on May 24, a law firm, Anthony and Middlebrook, representing Mars Hill sent a letter to Nunez expressing disappointment over the city’s stance. However, the letter acknowledged that the church planned to move to the Garden Grove location and expressed hope that the city would allow the church a little more time to complete the move. The Religious Land Use and Institutionalized Persons Act was not invoked to challenge the zoning ordinance but to ask for more to time in order to prevent disruption of services.
This brings us back to May 26 when Mark Driscoll told Mars Hill Church that he didn’t understand what the problem was and that perhaps someone at the City of Santa Ana had an “axe to grind against Christianity.” Given the events leading up to that point, it is hard to imagine how he didn’t understand the situation.
On Sunday May 27, in defiance of Nunez’s warning, Mars Hill met again at The Galaxy. As a result, the church and building owner were fined $100 each. 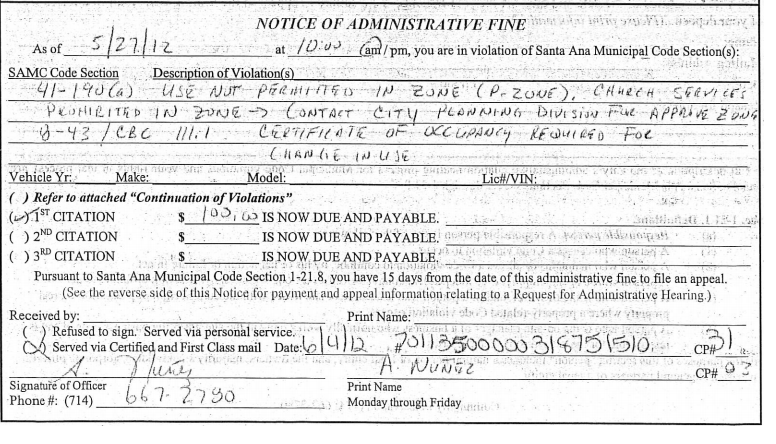 By this time, the Garden Grove property had been nixed and the church considered Woodbridge Community Church. However, according to an email from Mars Hill property management department, Sutton Turner did not want to move ahead with that property either.

From:
Date: Friday, June 1, 2012 9:25 AMTo: ”kyle@marshill.com” <kyle@marshill.com>Subject: Woodbridge
Kyle
Sutton would rather us keep looking, and meet in a park if need be, than have only an afternoon time slot.  It sounds like this is the opinion of all 3 EE, no just Pastor Sutton.  I pulled the plug on the LOI.  We’ll keep focusing our efforts on other options.

(LOI stands for “letter of intent.”)
From there it is not clear from the evidence I have what happened. In June, the Firstenbergs were laid off from Mars Hill effective July 6, suffering personal and financial hardships. According to emails between Mars Hill’s attorney’s and Santa Ana, the church continued to express willingness to move but did not do so. The church and building owner were fined again on August 26th, this time for $200. Eventually, the church moved to Huntington Beach, CA.
While these materials do not prove all of Kyle Firstenberg’s claims, they do provide support for them.  It appears that the executive elders of Mars Hill Church were aware that the church was in violation of the zoning laws and advised staying in the building, even paying fines instead of leaving. The religious discrimination angle did not seem to be a part of the narrative until the city raised the possibility of enforcement. If anything, it appears that the city of Santa Ana demonstrated some restraint given the length of time the church was out of compliance with zoning laws.
As noted, I contacted Sutton Turner for his view and he declined to comment saying this was a “private matter.” If there is additional evidence that anyone involved would like to provide, please feel free to contact me.