Another researcher has issued a statement accusing a member of the National Association for the Research and Therapy of Homosexuality (NARTH) of misrepresenting research. In a statement first issued to blogger Rob Tisinai yesterday, Theodora Sirota, a professor of Nursing at Seton Hall University, said, NARTH advisory board member Rick Fitzgibbons “mis-reported and misrepresented the results of my 2009 research.” At issue is a 2009 Archives of Psychiatric Nursing article* authored by Sirota about attachment in daughters of gay or bisexual fathers. In November, Fitzgibbons used Sirota’s research in an article on   website, MercatorNet, to make the claim that “children raised by same sex couples fare less well than children raised in stable homes with a mother and a father.”

Dr. Sirota told me today by phone that her study could not be used to make a generalization about same-sex couples because the participants in her study did not grow up in same-sex homes. Instead, they grew up in what she called, “heterosexually-organized families where fathers were gay or bisexual.” In other words, the parents were in a mixed orientation marriage, where the mother was straight and the father was gay or bisexual.

In his MercatorNet article, Fitzgibbons refers to Sirota’s article in a section titled, “The children do suffer” and claims that “There are strong indications that children raised by same sex couples fare less well than children raised in stable homes with a mother and a father.” As Sirota points out, her research does not support Fitzgibbon’s claim. He compares apples and oranges.

The women surveyed by Sirota were in families with a mother and father, not same-sex couples as implied by Fitzgibbons. Fitzgibbons improperly generalizes from mixed orientation marriages to same-sex couples. Sirota pointed this out to Fitzgibbons in the comment section of his article, but he declined to retract his incorrect use of her study.

Another factor pertinent to the findings of attachment problems in women is the frequency of divorce in mixed orientation marriages found by Sirota. Parental divorce was reported more frequently by women who grew up in mixed orientation homes than by the women with two straight parents. Sirota describes these differences in her dissertation (the 2009 study was based on her PhD dissertation research conducted in 1996). On page 81, Sirota wrote, 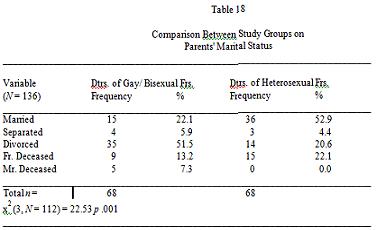 Note that 57.4% of the group with gay fathers reported divorce or separation compared to only 25% of the group with straight parents. Divorce is known to be a relevant factor in attachment formation and the group with gay or bisexual fathers reported significantly more of it. One cannot say that the orientation of the men was the factor which led to the poorer attachment reported by the participants in Sirota’s study. In fact, it makes more sense, especially given the average age of the daughters when the divorce took place (12.8 vs. 9.4), to propose that divorce and related instability is more the culprit for the poorer attachment results than the sexual orientation of the fathers. In any event, without controlling for divorce, one cannot reasonably isolate the father’s sexual orientation as the sole factor relating to differences in attachment, if it is a factor at all.

Having discussed divorce as a confounding variable, the main objection of Dr. Sirota remains. Her study cannot be generalized to say anything about same-sex couples and attachment dynamics in their children. Dr. Fitzgibbons makes an improper generalization in his article and adds insult to injury by defending his treatment of the study when the misuse was pointed out.

There are other studies in the MercatorNet article which are stretched too far (e.g., Sarantakos) and I may come back to the topic in a future post.