It should be no surprise that all of the top ten posts relate to Mars Hill Church in some way. Here they are:

You can read all of the articles on Mars Hill Church here.
The most popular post this year written prior to 2014 was a 2009 post on the relationship between child abuse and homosexuality. Another popular this year written in the past was a post on David Barton’s distorted story about Congress and the first English Bible printed in the United States.

Dear Mark Driscoll:
You were once one of my closest friends.
You were once my trusted mentor and benefactor.
You were once someone who preached the Gospel with a fierce and captivating passion and purity.
You were the one who inspired me to be a preacher… a church planter.

You’ve destroyed people, Mark.  You’ve ruined people’s reputations.  Through your own perverse interpretation of “God’s grace”, you’ve cast people aside who you decided were not “on mission” spoke of “a pile of dead bodies behind the Mars Hill bus.”  The pragmatism backfired. What you won them with, is what you won them too, and now there are thousands who have been hurt, and who have hurt others.  Beautifully, many of them are finding forgiveness and healing as they reconnect with each other and grow in grace.
Please Mark.  Just stop. Step down. Resign.  There was a brilliant post today on Dave Orrison’s blog Grace for my Heart that defined the difference between a narcissistic apology and a real apology. The center of the narcissistic apology is the offender saying “I am hurting because of this.” The real apology sees the victim in the center and says, “You are hurting because of this.”  The difference – and a critical one – is empathy.  As my wife so insightfully noted, “a narcissistic apology is when the apology itself is actually abusive.”  It’s extremely manipulative.

I love you and your family, and will be earnestly praying for you in all of this.
I have the same phone number and email. You know how to find me.
My name is Ron Wheeler.
I Am Not Anonymous.

No matter where you stand on Mark Driscoll and Mars Hill Church, if you are interested in the developments there and in the larger church planting movement, this post by Wheeler is must reading.

In 2004, Zondervan published The Radical Reformission: Reaching Out Without Selling Out by Mark Driscoll. In 2006, they published Driscoll’s Confessions of a Reformission Rev: Hard Lessons from an Emerging Missional Church. In these books, among other things, Driscoll addressed the relationships between the Gospel, the church, and culture. In The Radical Reformission, he borrowed a graphic from a book edited by George Hunsberger which indicates a reciprocal relationship between the three spheres. In addition, he outlined how leaving out any one of the spheres could lead to a negative result.

Driscoll’s formula has been cited by other church planters and authors since then. However, according to a former close colleague, Ron Wheeler, Driscoll lifted those concepts from work Wheeler did while developing the first Acts29 Network church plant in Mt. Vernon, WA — The Gathering. Wheeler was in the room when the Acts29 Network was organized and spent much time with Driscoll in the early days of Mars Hill Church. From Wheeler, I obtained the following page taken from an   in-house church document. See especially the bottom of the page where the relationship between church, culture and the Gospel are outlined. 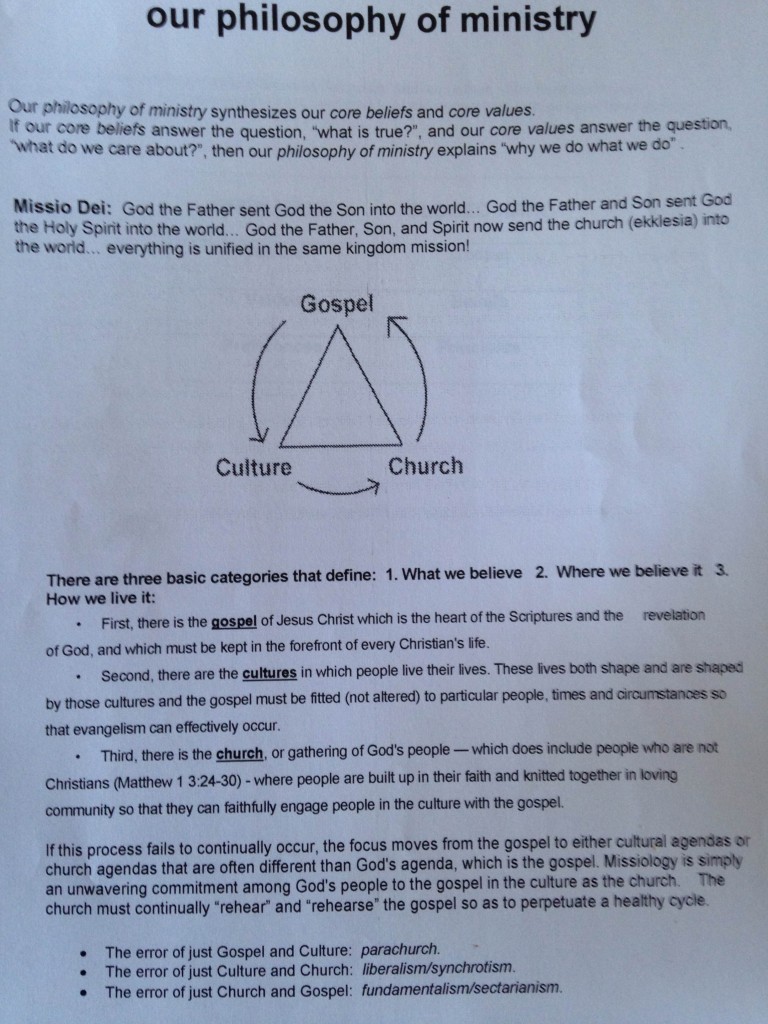 Compare this page with several pages (19-22) in Driscoll’s book The Radical Reformission (the material in Confessions is very similar): 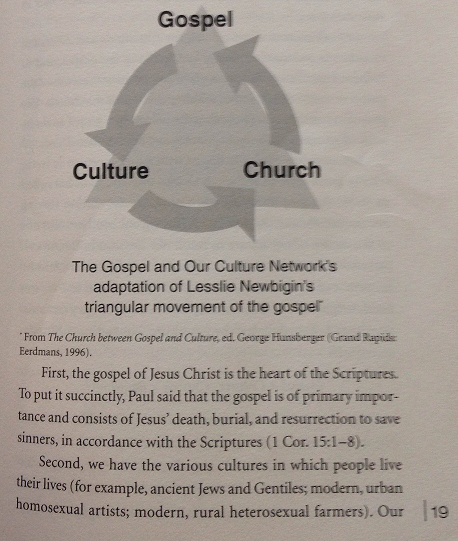 Note that Driscoll credits Hunsberger for the image which Wheeler acknowledged elsewhere in the document came from various Gospel and Our Culture Network’s materials. However, there is no credit for Wheeler in this book or in Confessions of a Reformssion Rev, another Driscoll book which refers to Wheeler’s formula. 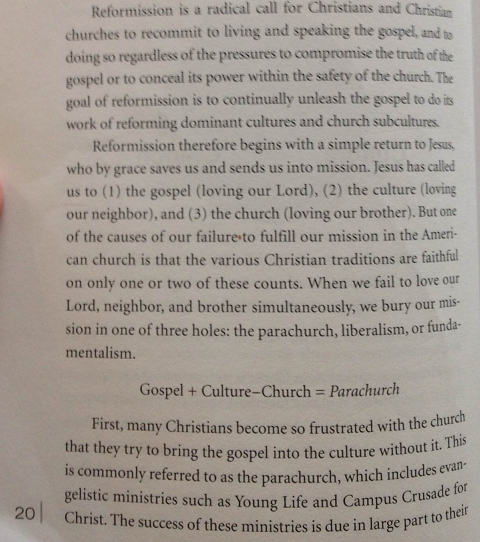 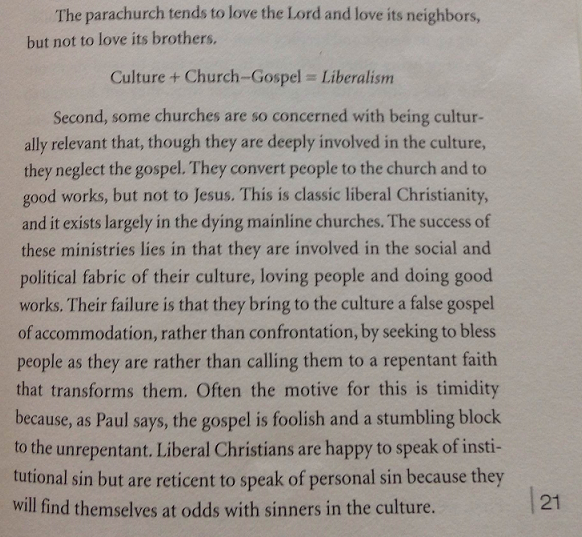 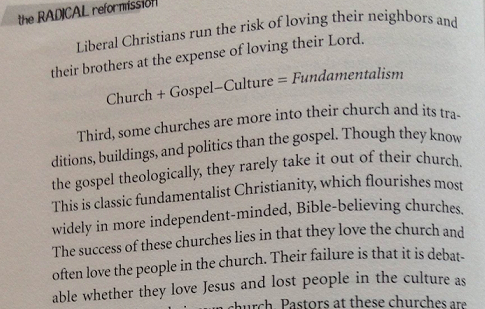 Wheeler told me that he began teaching this material in 2003 and that Mark Driscoll did not cite another source since he heard it from Wheeler. I have both books and I can find no reference to Wheeler. Wheeler added that Driscoll called him the night before the Radical Reformission book released to inform him the material was going to be in the book. Wheeler said:

As far as the phone conversation, Mark called and basically said “my book Radical Reformission is being released tomorrow and I don’t remember if I asked you or not, but I used your parachurch, fundamentalism and liberalism categories on the gospel/church/culture model. Thanks bro.“

Looks like I will need to update my chart of other citation errors and plagiarism.

Wheeler added that he thinks Driscoll may have taken advantage of the fact that Wheeler was younger and a subordinate to Driscoll. Wheeler eventually brought charges against Driscoll to the board of the Acts29 Network regarding a pattern of abusive behavior he said he experienced with Driscoll. According to Wheeler, the board did not take his charges seriously. In fact, all of the board at the time may not have seen the charges.

According to Wheeler, some of the board members later told him his letter was never seen by the board.

In any case, Wheeler told me that he is stepping forward now because he hopes his former mentor will take the public outcry seriously and move toward change. “After going to Mark and others, I hope the weight of all of these things I am bringing forward will cause Mark to listen and change,” Wheeler said.

I emailed Mars Hill Church early Wednesday and asked for comment or other response to these claims with no response.