Chapter 3 of Mark and Grace Driscoll’s book Real Marriage is addressed directly to his male readers. In the chapter on Men and Marriage, Driscoll says that men are to be tough and tender but proposes that some men are too tough (tough chauvinists) and some are too tender (tender cowards). They are not terms of endearment.
As I read through this section, some of the terms seemed familiar. Indeed, Driscoll’s designations and descriptions for three of the tough chauvinists and one of the tender cowards appear to be restatements of Robert Brannon’s 1976 descriptions of male sex roles. Another of Driscoll’s tender cowards appears to be reminiscent of Dan Kiley’s Peter Pan Syndrome.
Let me state upfront that I am not accusing Driscoll of plagiarizing Brannon’s or Kiley’s work. I cannot prove Rev. Driscoll had access to Brannon’s or Kiley’s material. It may be a coincidence that these exact labels are used in this typology.  Perhaps he studied Brannon in college and later came up with the labels without recollecting where he had heard them. Regarding Kiley’s popularization of the concept of the “Peter Pan Syndrome,” I don’t see the lack of citation as a serious problem. The concept of a man who will not grow up is not particularly novel and has been referred to in a variety of ways. However, with regard to Brannon, if Driscoll was aware of Brannon’s material, then he should have credited the author as a part of the expanding the typology. This situation is comparable to Driscoll’s use of Dan Allender’s typology of female responses to abuse (“tough girl, party girl, good girl”). Apparently, Thomas Nelson, the publisher of Real Marriage, believed the Driscoll’s use of Allender’s work required acknowledgment because the publisher recently added a note to Allender in the Kindle version of Real Marriage. If Driscoll did indeed rely on Brannon for these designations and the accompanying descriptions then a similar notation in Real Marriage should be added.
First let’s look at Brannon’s typology and descriptions of gender roles. In his 1976 book chapter, “The Male Sex Role: Our Culture’s Blueprint of Manhood and What It’s Done for Us Lately” from the book The Forty-nine percent majority: the male sex role, edited by Brannon and Deborah S. David, Brannon describes four dimensions of the male role:

1. Anti-Femininity (“No Sissy Stuff”): The stigma of all stereotyped feminine characteristics and qualities, including openness and vulnerability.
2. Status and Achievement (“The Big Wheel”): Success, status and the need to be looked up to.
3. Stoicism and Independence (“The Sturdy Oak”): A manly air of toughness, confidence, and self-reliance.
4. Adventurousness and Aggressiveness (“Give ‘Em Hell!”): The aura of aggression, violence and daring

The article is too long to reproduce here. However, some description from the article is necessary to demonstrate the similarity to Driscoll’s content.

1. Anti-Femininity (“No Sissy Stuff”): the Stigma of Anything Vaguely Feminine
The earliest lesson: Don’t be like girls, kid, be like. . . like. . . well, not like girls.
A “real man” must never, never resemble women, or display strongly stereotyped feminine characteristics. (emphasis in original)
This stigma of femininity (i.e. “effeminacy”) applies to almost everything: vocabulary, food, hobbies, sexual orientation and even choice of profession. What follows from this is that men who are most intensely concerned with their own masculinity seldom desire close and prolonged contact with women
If everything associated with females is so potentially stigmatizing, it’s not hard to guess how much real intimacy with women themselves a manly man is supposed to want.
Men who are most intensely concerned with their own masculinity seldom desire close contact with women.
Open displays of anger, contempt, impatience, hostility, or cynicism are not difficult for most men.  But emotions suggesting vulnerability, and even extremely positive feelings such as love, tenderness, and trust are almost never acceptable.
Also, men in general are far more reluctant than women to reveal personal information about themselves. Jourard (1971) found that men reveal less than women, no matter who the audience, and that both sexes reveal less to men than to women. 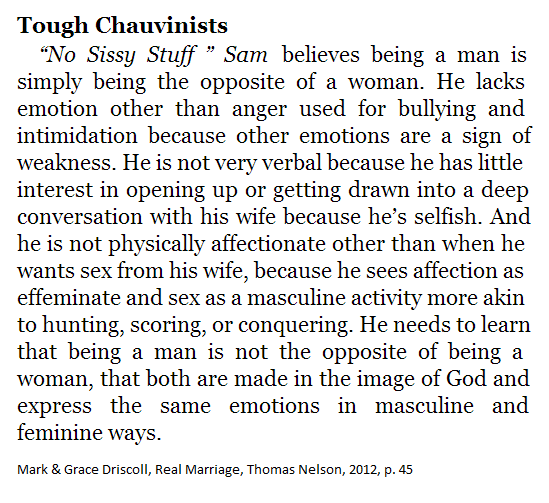 Brannon calls the next aspect of the male role, “The Big Wheel”:

II. Status and Achievement (“The Big Wheel”): Success, Status, and the Need to be Looked Up To
One of the basic routes to manhood in our society is to be a success: to command respect and be looked up to for what one can do or has achieved.
The most visible and sought-after source of status in our society is what we loosely refer to as “being a success”. The business tycoon, the politician, the movie star and the sports hero enjoy an automatic kind of status, and will often be viewed as masculine role- models on this basis alone.
Men who haven’t “made it” by the standards of the mainstream often find other battlegrounds to fight on, other routes to status before smaller but highly appreciative audiences. A neighborhood bar may have a champion dart thrower, with a standing bet to lick any man in the house…In truth, almost anything pursued seriously can become a source of status, and status itself is the ultimate prize.
The act of lovemaking was once considered a natural function and the male prerogative at that. With the widespread discussion of female orgasm, not to mention multiple orgasm, and the appearance of hundreds of sex manuals telling men how to bring any woman to the brink of ecstasy in 35 easy steps, a whole new proving ground for male competence (and status) has appeared. 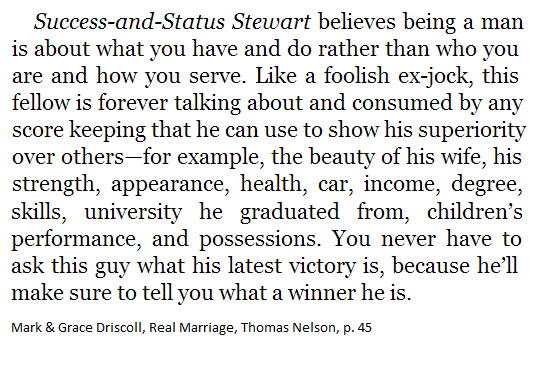 Going in Brannon’s order of presentation, the next male role is “The Sturdy Oak.”

III. Stoicism and Independence (“The Sturdy Oak”): A Manly Air of Toughness,
There is another paradigm of masculinity which has nothing directly to do with social status. There is a distinct sense of strong manliness, not usually belligerent or looking for trouble, but  tough and self-possessed, which somehow emerges from the variable combination of quiet confidence, self-reliance, determination, indifference to opposition, courage, and seriousness.
A “real man” never worries about death or loses his manly “cool.”
A father may decide on a firm punishment for his son and stick to it, when understanding and support are what’s needed.

For Driscoll, “The Sturdy Oak” is a tender coward (p. 46). Driscoll emphasizes the aloof nature of the sturdy oak to create a character who doesn’t engage with his family. 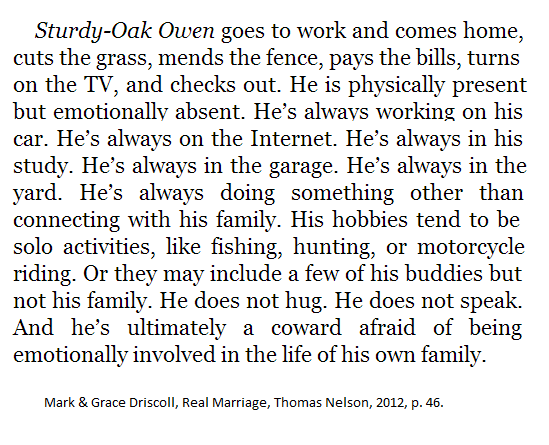 Brannon’s final male role characteristic is a description of aggression that is expected from males.

IV. Adventurousness and Aggressiveness (“Give ‘Em Hell”): The Aura of Aggression,
Violence, and Daring
There is another deep and rich vein in the male gender role that also smacks of strength and toughness but is not fundamentally wholesome, constructive, or benign. It is the need to hurt, to conquer, to embarrass, to humble, to outwit, to punish, or to defeat or most basically in Horney’s useful phrase, “to move against people.”
Although both this paradigm and the former (i.e. the Sturdy Oak) draw on toughness as a defining feature, in this case the underlying theme is one of attack and not defence.

Driscoll’s version of “Give ‘Em Hell” gets the name Hank and sounds a lot like Brannon. 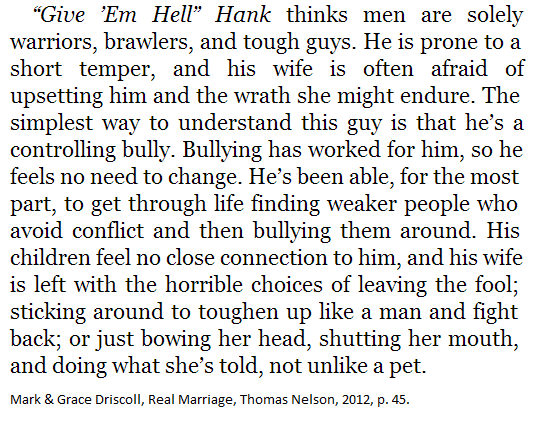 Driscoll preached this typology in a 2009 sermon titled Marriage and Men. In the sermon and in Real Marriage, Driscoll adds a character called “I’m The Boss Bob” to his list of tough chauvinists and “Little Boy Larry” (where he invokes the Peter Pan), “Hyper-Spiritual Henry” and “Good Time Gary” to his list of tender cowards. Other than the added characters, Driscoll’s typology is different in that Brannon taught that the labels described role pressures that most men experience. Driscoll makes these designations to be different types of men. As an academic matter, I think Brannon’s typology is more useful because, as with any typology, one can see combinations of types that better describe individual people. Furthermore, given varying life circumstances, some men may experience one type of pressure at one time of life and another more keenly at another time of life.
I asked Neil Holdway, treasure of the American Copy Editors Society how he viewed Driscoll’s typology as compared to Brannon’s. After reviewing the two sources, he said there are some suspicious elements but one cannot be sure what inspired Driscoll since Driscoll has not spoken on the matter and Brannon is not the only person to write about gender roles. However, he added, “If Driscoll drew on the work of Brannon and any others, he should have cited it in some way — with attribution within the text or with footnotes, as Brannon did so well with his work.”
It is certainly fine to build on someone else’s work but it is important to give credit for the inspiration and material used. As noted above, this case may be similar to the citation problems with Dan Allender’s work. Thomas Nelson has addressed that, making it clear that the Driscolls did borrow from Allender. If Driscoll was aware of Brannon’s work, then a similar response may be forthcoming.