Billy Bray is a veteran missionary who goes way back with Gospel for Asia’s founder K.P. Yohannan. Bray told me that he was one of the early advocates of the indigenous movement in missions. About his relationship with Yohannan, Bray said:

I actually lived with K.P. for several months in India, and then with K.P. and Gisela in their house for six weeks while writing the first book. I was K.P.’s team leader on the first OM team to Rajasthan and helped recruit him into Operation Mobilization when he was only 15 years of age. So that book — and all three books, were written out of a deep personal friendship with K.P. and his family. In fact, I started work on the first book with him before Gospel for Asia was even named while he was living in Oklahoma, and before there were any GFA staff.

Bray told me he wrote “every word” of K.P. Yohannan’s book Revolution in World Missions and also wrote much of the following two books credited to Yohannan. Even though he said he wrote every word of the book, he didn’t describe it as ghostwriting. Bray told me:

Although I did the first drafts of all three of K.P. Yohannan’s books for Creation House, it was always a collaboration, not ghost-writing. I was paid for the work and given acknowledgement in all three of the books.

Writing “every word” sounded like ghostwriting to me so I was curious about how Bray felt the authorship should have been described. Below is Bray’s description of each book he worked on.

So, if I did the work today, I would insist on the following, more accurate bylines to describe the authorship of these books:
For THE COMING REVOLUTION IN WORLD MISSIONS: God’s Third Wave (c) 1986, it should have been properly attributed “By K.P. Yohannan as told to Billy Bray”. In the Acknowledgements section of the first edition K.P. correctly listed me first among those who helped him editorially using these words, “Of those especially close to me during the long writing, editing and review of this manuscript, I would like to thank William T. Bray, (David and Karen Mains, Gayle Erwin, Dave Hicks and Margaret Bennett for their honest criticism and unwavering support of this entire project).” The parenthesis are mine.
I arranged for David and Karen Mains to write the foreword and for the publication of the book with Cliff Dudley and Bob Walker in Carol Stream where I was working at Christian Life Magazine and Creation House. K.P. also thanks others who were involved in the typing and reading of the manuscript including Larry Jerden and Heidi Chupp (among others).
I was something of a photojournalist in those days and a number of my photos appeared in the first editions of the book, always without credit as well.
For THE ROAD TO REALITY: Coming Home to Jesus from the Unreal World (c) 1988, it should have been properly attributed “By K.P. Yohannan with Billy Bray.” In the acknowledgements, K.P. credits my role as follows “However, I especially want to thank those who were closest to me during the months of writing and editing this manuscript, William T. Bray and Robert Walker.”
Again, I worked with K.P. and Creation house to acquire the endorsement of Erwin Lutzer who was already a fan of K.P. and Bob Finley and Bob Walker — all of which were leading supporters of the indigenous movement in missions by then. This book reflects most accurately the spiritual motivation that both K.P. and I shared at the time, a product of our years under the spiritual influence of Bakht Singh, George Verwer and Bob Finley.
For the third book, then titled WHY THE WORLD WAITS: Exposing the Realty of Modern Missions (c) 1991, it should have properly been attributed to the authors as follows, “By Billy Bray and K.P. Yohannan.” After vicious criticism from the missions establishment at the time, which I thankfully escaped since my name was not on the book, it was revised and published under a softer title.
On the acknowledgements page dated March, 1991, he [Yohannan] first thanked Robert Walker and Murray at Creation for their editorial input and courage and then he credits me only as “Bill — for your help in gathering information and for your most valuable suggestions.” He goes on to thank the staff, and during part of the writing of this book, I was also employed on staff at the GFA headquarters in Carrollton at the Walnut Plaza offices. That is perhaps why he felt less of a need to acknowledge my outlining and writing the first two drafts of this title.
This account, to my best knowledge and recollection, is the truth behind these first three books. I thank the Lord for the privilege of being an intimate part of them — and even though they have been edited and revised over the years by many hands for marketing and fundraising purposes, I stand by the original text in the first editions. I would be happy to discuss them further and hope that the original versions will be preserved as much as possible for academic reasons in the years to come.
And of course, I wish I had 50 cents royalty for every copy sold! It would come in handy now as I am trying to produce a book a year for the cause of Christ as long as the Lord gives me strength and health. One thing I have learned from writing the K.P. Yohannan series is the amazing power of a book to change minds and the course of history!”
“Dear Lord, we acknowledge our commitment to You is so shallow. We say we love You, but our actions betray us. Open our eyes so we see time and eternity as You see it. Forgive us for forgetting we are only strangers and pilgrims on this earth. How foolish we are, oh Lord, to store up treasure on this earth and fight to save our life and preserve it, when You tell us we will lose our life if we try to do that. We ask You, dear Lord, to forgive us and help us to walk in Your footsteps–forsaking all, denying ourselves, carrying our crosses daily and loving You supremely so Your causes might be furthered in this dark and dying world. In Jesus’ Name, Amen.” (Our closing prayer from the first book.)


original material without attribution so it is hard for me not to use that word.
I asked Bray why Yohannan was chosen as the author when Bray was the writer. He said the publisher and the advocates of the indigenous mission movement wanted an indigenous pastor as the figure head of the movement. Having Yohannan as the author created that perception and recognized his potential.
Since I don’t have much knowledge of the history of missions, I can’t speak to the wisdom of the indigenous movement. However, I can say that what is going on in India now under Gospel for Asia and Believers’ Church seems inconsistent with what I am reading in Revolution.  I hope to explain my reasons for saying that in a future post.
Bray has a book coming out any day now titled How I Discovered the Power of a Yielded Life in which he provides even more detail about his authorship of Yohannan’s books and the indigenous mission movement.
UPDATE:
Here is the Acknowledgments page of the first edition of Revolution in World Missions. 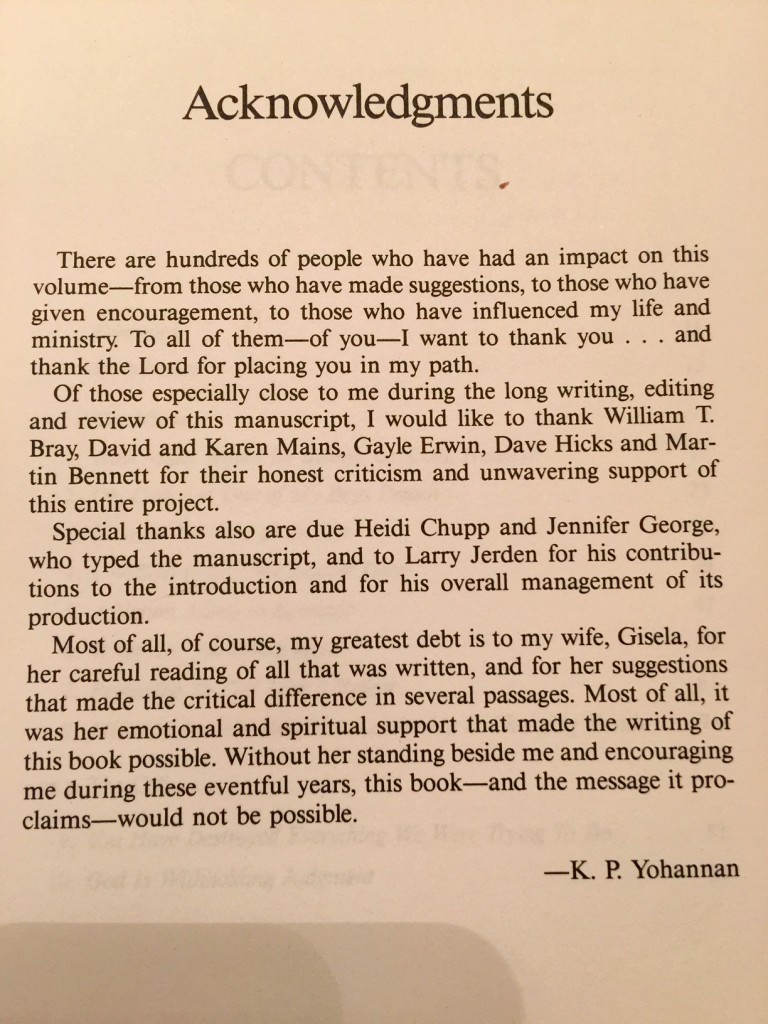 I have confirmed with two other people listed on this page and one other who was involved in GFA from the beginning that the information related here by Bill Bray is accurate.