In 2012, journalist Jonah Lehrer came under fire for self-plagiarism.* Lehrer eventually lost his job due to recycling and inventing material, notably attributing false quotes to Bob Dylan. While writing for the New Yorker, Lehrer posted a column which began in nearly the same manner as a column published by the Wall Street Journal during the previous year. Jim Romenesko first reported Lehrer’s recycled material. To see how similar they are (nearly identical), you can go to Romenesko’s blog and/or compare the Wall Street Journal article with the New Yorker version. A lengthy description of recycling is provided by the Reluctant Habits blog.
Once the New Yorker learned of the reuse of material, the editor posted the following statement:

Editors’ Note: The introductory paragraphs of this post appeared in similar form in an October, 2011, column by Jonah Lehrer for the Wall Street Journal. We regret the duplication of material.

Eventually, it was learned that Lehrer had double dipped on other occasions. Although some complained about the term, “self-plagiarism,” his conduct was of intense interest to his peers. Lehrer eventually said about his actions, “It was a stupid thing to do and incredibly lazy and absolutely wrong.”
In summary, the publishers involved took the recycling seriously, they made readers aware of the duplication, and Lehrer said what he did was stupid, lazy and wrong.
It is unclear to me how the Christian publishing world regards recycling material when multiple publishers are involved. In this post, I am simply going to point out an occasion of recycling in Mark Driscoll’s books. I have been reading several of them, and I can tell you there are more instances. For now, I will stick with the case of Driscoll recycling material from Religion Saves: And Nine Other Misconceptions published by Crossway Books in 2009 into Real Marriage published by Thomas Nelson in 2012.
First, both books contain a description of pornography. They are nearly identical.** 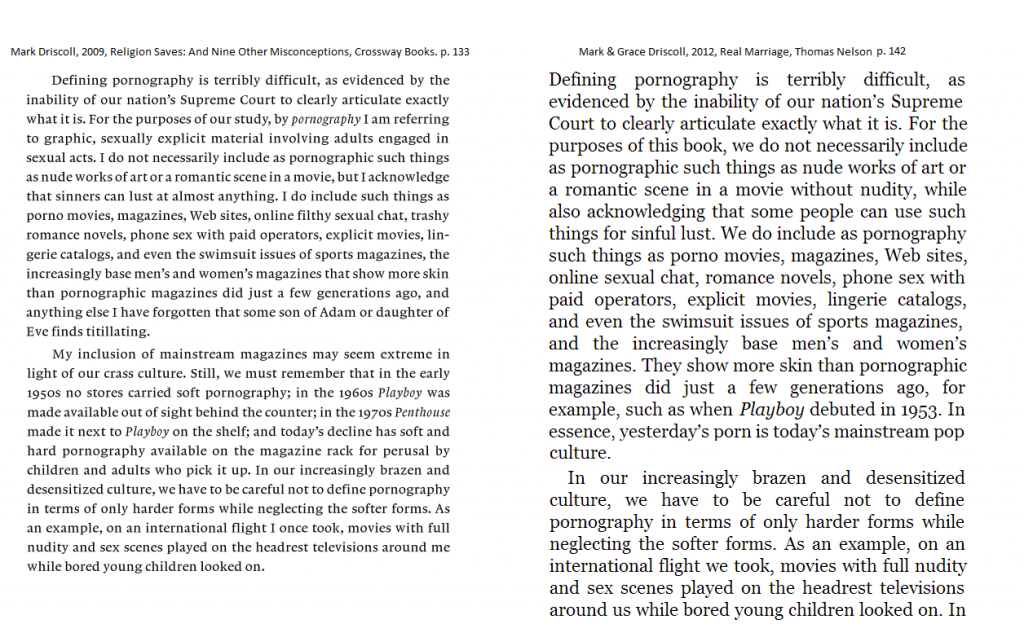 As an aside, no experts are cited and I haven’t figured out where he got that list.
Now, here is the same material from Religion Saves published earlier by Crossway Books. 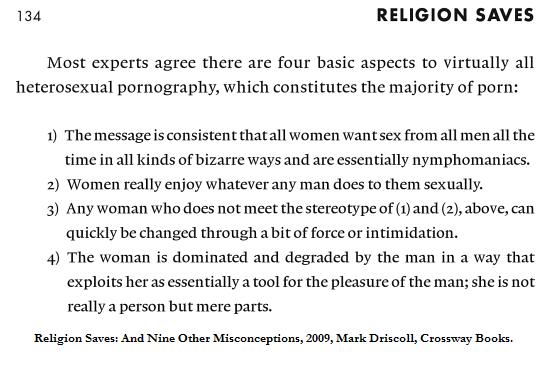 The passages are identical. Perhaps there is some undisclosed arrangement between the publishers, but I can’t find any permission or acknowledgment in Real Marriage that this material comes from a book published by Crossway.
In Real Marriage on page 113, Driscoll writes:

The life of a prostitute is incredibly dark: 62 percent report having been raped in prostitution. In one study, 75 percent of women in escort prostitution had attempted suicide; prostituted women comprised 15 percent of all completed suicides reported by hospitals.

On page 140 in Religion Saves, the same opening sentence is written (“The life of a prostitute is incredibly dark”) with the same statistics, albeit with a few additional stats.
On page 112 of Real Marriage, Driscoll writes:

The sexual revolution of the 1960s and ’70s radically altered the sexual landscape of our nation, so that today sex before marriage and viewing pornography are the culturally accepted norm.

The identical sentence can be found on page 130 of Religion Saves.
Much of chapter 5 in Religion Saves is recycled in Real Marriage. In both, Driscoll cites Jim Dobson on the story of Ted Bundy, and Patrick Carnes on sexual addiction. He recycles the material on sexual addiction with the same sexual addition criteria list from Carnes. He has identical statements about pornography and lust. Much of the same ground is covered in both books with no mention in Real Marriage of the exact same material being first published by Crossway in 2009.
Jonah Lehrer found that recycling material (and other misdeeds) caused quite a stir among journalists and led to publishers pursuing vigorous public actions to protect their interests and reputations.  To me, the situations seem quite similar. It remains to be seen how Christian publishers will view extensive recycling of material from one publisher’s book to another by the same author.

*I first learned of the Lehrer story from Jake Dockter at The Great White Whale. In his piece Dockter asked many pointed questions based on what was known at the time. Many of those questions remain unanswered.
**I added this image as an update to the original article.