Back in April, Texas Governor Rick Perry officially proclaimed three days of prayer to bring rain. Texas was already in a bad way at I suppose he and his advisors thought a little prayer couldn’t hurt.  According to the US drought monitor, here is what the nation looked like on April 19, just a couple of days before the season of prayer. 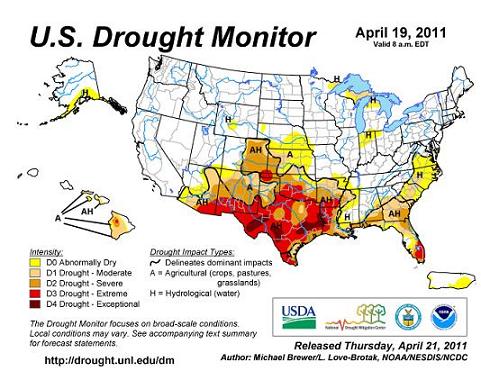 It looked bad then. Now look at the map of the drought for August 9. 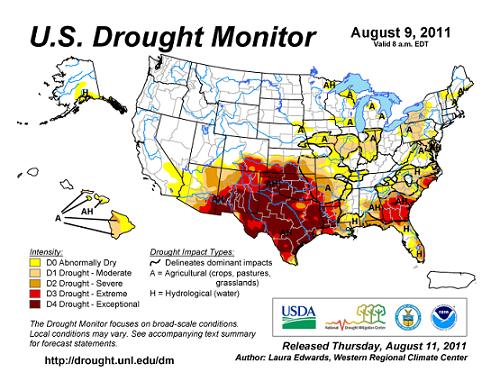 As the key shows the darker colors indicate dryer conditions. Since the official days of prayer, the drought has worsened significantly. The last ten months are the worst on record.
Jesus told his followers that they should always pray and not faint. So I am not faulting Perry for praying for relief from the drought. Even though lakes, rivers, and people are fainting, acknowledging God is good religious policy.
But is it good public policy? I think Perry is vulnerable politically because he has lifted up prayer as a kind of last resort for politicians when they face difficult policy questions. To promote his August 6 prayer meeting in Houston, Perry said there are some problems so big that only God can fix them. While I have no problem with asking God for wisdom, I am not and I don’t think most Americans are prepared to “let go, and let God” when it comes to the economy, or national defense. If so, then just pray for Mr. Obama and the economy and watch the charts.
On The Response website, John Adams’ call to fast and pray is cited as a precedent for Perry’s prayer meeting. However, Adams came to regret his proclamation, saying it turned him out of office. Many evangelicals already like Perry, but it will take more than common ground with that large voting bloc to answer his prayers for the Presidency.
Speaking of Texas, I wonder who has been praying for the worst-record-in-baseball  Houston Astros.