In the “Wait, what?” category, David Barton claimed on his radio show that the Justice Department is not prosecuting pornography cases. Right Wing Watch has Barton’s claim:

Barton: We’ve got laws against illegal pornography, and you can’t stop all pornography but even the liberals recognize that some pornography is over the top.
Green: I mean an easy one is child pornography.
Barton: Simple. And you’ve had this Administration in three years has not prosecuted a single what’s called ‘obscenity,’ which is hardcore pornography. Not a single case. Now what’s that tell all the pornographers and all the movie guys and all the internet guys what they can do?
Green: Do whatever you want now
Barton: Man, we can push the limits, we can get over the top, we can use underage kids on these movies, we can do snuff movies because they’re not prosecuting nothing. So what we got today is—
Green: They’ve basically given a license for licentiousness—
Barton: Exactly. They’ve encouraged it, and that’s what happened with the Justice Department.

What is Barton talking about? Regular readers of this blog know how Mr. Barton handles history, so perhaps this is not a big surprise.

The leader of the Ugandans for Truth About Homosexuality Pastor’s Task Force Against Homosexuality, Martin Ssempa decided to take his pornography show to church, according to the BBC.

A Ugandan clergyman’s decision to show gay pornography to his congregation has been labelled as “twisted, homophobic propaganda” by a gay rights groups.

Behind the Mask told the BBC the stunt, by anti-gay Pastor Martin Ssempa, equated homosexuality to paedophilia.

The pastor showed the pornography in an attempt to gain support for a proposed law which would see some gay people facing the death penalty.

Earlier this week, I reported the reactions of some Pacific Lutheran University students who were in a similar presentation last month in Kampala. The students were not impressed and the presentation did not encourage them to favor harsh punishments for homosexual behavior.

Ssempa has divided his American supporters over his methods and views. Rick Warren and WAIT Training have severed ties with Ssempa. However, he represents Oral Roberts University in Uganda and is financially supported by Canyon Ridge Christian Church (Las Vegas).

Next he wants to take the show to the Parliament. 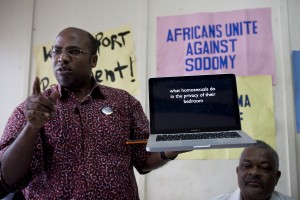 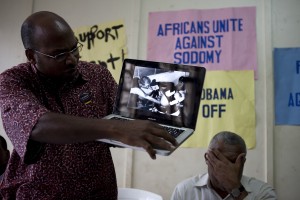 The photos above were provided anonymously by someone who attended one of the presentations over the past few weeks. I have more but I am unsure whether to post them. Suffice to say they are troubling but not in the way Pastor Ssempa hopes. This is leather S&M which of course is unrepresentative of the population he hopes to demonize.