Iris Robinson, the “first lady” of Ireland and also a MP (member of Parliament) from Northern Ireland has stepped into controversy with comments about her oppostion to homosexuality and her beliefs that gays can change with counseling. With what should seem in hindsight to be a very poor sense of timing, she made her negative comments about homosexuality in response to a question about a hate crime in Belfast, Northern Ireland directed toward a gay man. Taking a page from the Sally Kern playbook, she expressed no regrets for her comments which were more harsh than a simple recitation of her moral opposition (see this article…).
About reorientation therapy, Mrs. Robinson said:

Subsequently, the psychiatrist involved, Paul Miller, gave an interview to a Belfast newspaper and appeared on radio to address the claims of change therapy. Paul Miller is a psychiatrist who is a senior advisor to Mrs. Robinson and works extensively with post-traumatic stress. He is also a former trainee of Richard Cohen. Cohen presented a workshop in Northern Ireland in November of 2007 with Paul Miller as the contact person.
In an email to me, Dr. Miller said Cohen’s training was “a very valuable part of their attempt to equip themselves for working in this area.” It must have been well received since three points cited by Dr. Miller are taken in the same order from Richard Cohen’s website.

Dr Miller said three key messages summed up his work.
“First, no one is born gay because gay identity is a complex interaction between genetics and environment; second, no one chooses to experience who they are sexually attracted to; and thirdly, change in sexual orientation is possible.”

Compare those points with the front page of the International Healing Foundation. 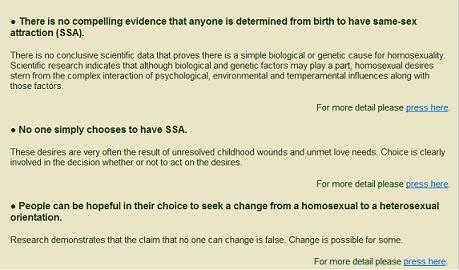 I have not received a reply to my questions about whether the bioenergetic and holding therapy approaches were demonstrated or make up a part of Dr. Miller’s work.
Meanwhile, Mrs. Robinson is being investigated for violating laws relating to hate speech. Unfortunately, some Christian conservatives will turn this event into a debate over free speech. As with Sally Kern, Mrs. Robinson may have the right to say what she did (actually in Ireland, she may not; we shall see…), but having the right doesn’t make it right. In response to questions about homosexuality, and in the context of discussion over a hate crime, why not simply express opposition to violence and hatred? Actually, in any context or at any time, I do not think it furthers any good purpose to engage in such ungracious and uncivil rhetoric.
Her pairing of comments about change therapy and the hate crime, along with her negative comments about homosexuality make it very clear to me that Christian sexual identity ministries should make their opposition to violence and harassment very clear.
Here is another Sally Kern moment; what will happen in it?