(In the photo above, Tim Clinton is above Donald Trump’s head, to the right of V.P. Pence, Image: Johnnie Moore’s Twitter feed, Jul 11, 2017)

Good sources, but you have to cite them.

Again, Professor Aaron New brought a potential citation problem to my attention and sure enough, it doesn’t look good. In the fourth issue of volume 12* of AACC’s flagship publication Christian Counseling Today, Tim Clinton’s byline rests on an article titled, “Judicial Tyranny and the Loss of Self-Government.” However, much of the article seems to be lifted verbatim from op-eds by Pete DuPont and Chuck Colson.

A fair use copy is reproduced here. The first page is clean as far as I can tell. However, when he begins to write about filibusters and the Democrats on page two, Chuck Colson and Pete DuPont enter in.  Here is the second page of Clinton’s article. You may have to click it to enlarge it. The material outlined in red is from Chuck Colson’s article, and the material outlined in black is from Pete DuPont’s op-ed.

Clinton’s Judicial Tyranny and the Loss of Self-Government 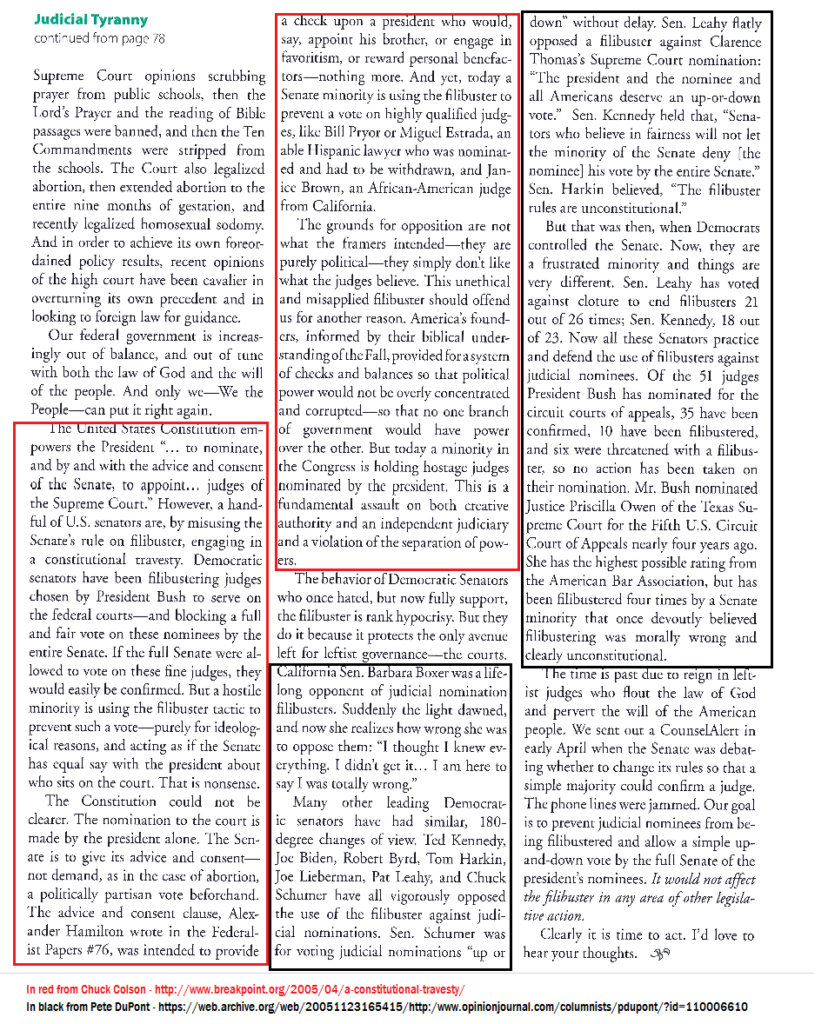 Check a side-by-side comparison of Clinton’s “Judicial Tyranny and the Loss of Self-Government” and the articles by Colson and DuPont.

Here is the link to Chuck Colson’s Breakpoint piece. The content from Colson’s piece included in Clinton’s column is reproduced below. Clinton rearranged some of it but there is much that is simply copied.

The President “is to nominate, and by and with the advice and consent of the Senate, to appoint . . . judges of the Supreme Court.”

Publius, of course, was the pen name used by three of our nation’s founders when they wrote the eighty-five newspaper essays now known as the Federalist Papers. Among the authors was Alexander Hamilton, who wrote essay number 76, from which I just quoted. These fading words on a yellowed document reveal that what a handful of U.S. senators are doing today is a constitutional travesty.

These fading words on a yellowed document reveal that what a handful of U.S. senators are doing today is a constitutional travesty.

Democratic senators have for months been filibustering judges chosen by President Bush to serve on the federal courts. If the full Senate were allowed to vote on these fine judges, they would easily be confirmed. But a hostile minority is using the filibuster tactic to prevent such a vote — purely for ideological reasons.

In so doing, they are behaving as if the Senate is supposed to have equal say with the president in deciding who sits on the court. That is nonsense.

The Constitution could not be clearer. The nomination is made by the president alone. The Senate is to give its advice and consent — not demand ideological purity. Alexander Hamilton explained the intent in his essay number 76. “It is not likely,” he wrote, “that [the Senate’s] sanction would often be refused where there were not special and strong reasons for the refusal.”

The advice and consent clause, Hamilton continued, was intended to provide a check upon a president who would, say, appoint his brother, or engage in favoritism, or reward family connections or personal benefactors — nothing more.

And yet, today a Senate minority is using the filibuster to prevent a vote on highly qualified judges, like Bill Pryor or Miguel Estrada, an able Hispanic lawyer who was nominated and had to be withdrawn, and Janice Brown, an African- American judge from California. And the grounds for opposition is not what the constitutional framers intended; it’s ideological. They just do not like what these judges believe.

This filibuster should offend us for another reason. America’s founders, informed by their Christian understanding of the Fall, provided for a system of checks and balances so that no one branch of government would have power over the other. But today a minority in the Congress is holding hostage judges named to the court. This is a fundamental assault on an independent judiciary and, thus, a violation of the balance of powers.

Below is the material taken from the DuPont op-ed.

Sen. Barbara Boxer is a longtime opponent of judicial nomination filibusters. Or she was. Suddenly the light has dawned, and she realizes how wrong she was to oppose them: “I thought I knew everything. I didn’t get it. . . . I am here to say I was totally wrong.”

Other Democratic senators have had similar changes in belief: Joe Biden and Robert Byrd, Tom Harkin, Ted Kennedy, Joe Lieberman, Pat Leahy, Chuck Schumer and their erstwhile colleagues Lloyd Bentsen, and Tom Daschle have all vigorously opposed the use of the filibuster against judicial nominations. Mr. Schumer was for voting judicial nominations “up or down” without delay. Mr. Leahy flatly opposed a filibuster against Clarence Thomas’s Supreme Court nomination: “The president and the nominee and all Americans deserve an up-or-down vote.” Mr. Harkin believed “the filibuster rules are unconstitutional,” Mr. Daschle declared that “democracy means majority rule, not minority gridlock,” and Mr. Kennedy that “senators who believe in fairness will not let the minority of the Senate deny [the nominee] his vote by the entire Senate.”

But that was then, when Democrats controlled the Senate. Now, they are a frustrated minority and it is different. Mr. Leahy has voted against cloture to end filibusters 21 out of 26 times; Mr. Kennedy, 18 out of 23. Now all these Senators practice and defend the use of filibusters against judicial nominees.

This fundamental change in deeply held liberal beliefs has made a difference. Sen. Orrin Hatch notes that in the 108th Congress (2003-04) the Senate “voted on motions to end debate on judicial nominations 20 times. Each vote failed.” Of the 51 judicial nominees President Bush has put forward for the circuit courts of appeals, 35 have been confirmed, 10 have been “debated” without conclusion–filibustered–and six were threatened with a filibuster so no action has been taken on their nomination. Mr. Bush nominated Justice Priscilla Owen of the Texas Supreme Court for the Fifth U.S. Circuit Court of Appeals almost four years ago. She has the highest possible rating from the American Bar Association but has been filibustered four times by a Senate minority that once devoutly believed filibustering was morally wrong and clearly unconstitutional.

Some of the above was omitted by Clinton (e.g., the sentence about Orrin Hatch), but most of this ended up without attribution in Clinton’s column.

In his response to Inside Higher Ed, Clinton said through his spokesman that he wasn’t directly involved in all of his online writing. In this article, it seems hard to make that case since the first page was personalized (“I don’t often write about political matters…”) and the end of the article was personalized. It would be great to hear directly from Dr. Clinton but he has yet to reply to my contact.

UPDATE (8/16/18): To the Christian Post, Clinton blames an employee for this. I would like to be a reporter asking some follow up questions. For instance, the first page contained personal illustrations which Clinton clearly wrote. Did he not read the rest of the article and wonder where did all of that other information come from?  Also, 60% of the article came from Pete DuPont and Chuck Colson. If an employee really contributed 60% of the content for the article, then why didn’t the employee get first billing on the authorship?

See this post for a longer response to Clinton’s “blame the ghostwriter” defense. In essence, the AACC code of ethics discourages Christian counselors from using ghostwriters or failing to give proper attribution to those who write articles with well known authors.

* The dating of Christian Counseling Today is confusing because the footer on the pages say the magazine was published in 2004. However, this can’t be true because in the editor’s introduction to that same issue Archibald Hart said that he wrote his column the morning Terri Schiavo died. Schiavo died March 31, 2005. Also, Clinton referred to quotes from Barbara Boxer which she did not say until March of 2005. Thus, the magazine couldn’t have been published in 2004 or even until sometime after April 2005. Furthermore, Clinton referred to legislative actions in Congress which happened in 2005, not 2004.

As additional evidence that the issue was published later in 2005, I was able to secure a photo of a copy of this issue of CCT received by the Baptist Missionary Association Theological Seminary in Jacksonville TX with a date of receipt: September 1, 2005. Somewhere around 2010, it appears that the AACC corrected this confusing dating and changed the date to match the calendar year of publication so that issues 1 and 2 were published in the last half of one year and issues 3 and 4 were published in the first half of the next year. In any case, when one considers the other statements in the magazine and Clinton’s article, it is clear that he wrote after Colson and DuPont, not before.