I am not a political commentator by trade nor do I play one on TV. However, I have dabbled in it as it does not require a license.

Commenting on US politics is difficult enough, but venturing into Ugandan politics is probably more treacherous. While I have frequently criticized Ugandan MP David Bahati’s Anti-Homosexuality Bill on principle, I have infrequently discussed what, if any, political advantages may come from the introduction and support for the bill. At first glance, it seems reasonable that a politician going into an election might seek an issue about which most people agree and make that issue his cause. And indeed, being perceived as a populist may be part of the benefit of the bill for those who support it there. However, there may be broader political motives for the party of Bahati and President Museveni, the National Resistance Movement.

An opposition party (Forum for Democratic Change) leader, Anne Mugisha, speculated in November, 2009 that the bill was introduced in order to take the mind of the public away from government corruption and tinkering with election laws. From her vantage point, the uproar over the bill plays into a pattern, saying

Like all legislative attempts at policing the bedrooms of adults the Bill will have no real impact on our private lifestyles. However, the Bill whether it is passed or not will create a lively debate that will serve a very sinister political purpose. Those who follow Ugandan electoral cycles will not be surprised by this diversion because they would have witnessed the same drama around HIV/AIDS in 2001 and rape in 2006.

She believes this year’s diversion is the Anti-Homosexuality Bill.

A good political ploy not only distracts votes but directs their attention toward a specific alternative target. If indeed the Anti-Homosexuality Bill has a political side, the target might be another opposition party candidate, Olara Otunnu. Otunnu has been long considered a potential candidate for the presidency. Recently chosen as the standard bearer for the Uganda People’s Congress, Otunnu is a former diplomat to the United Nations with a long resume of advocacy for children and, as the cartoon below indicates, a single man. 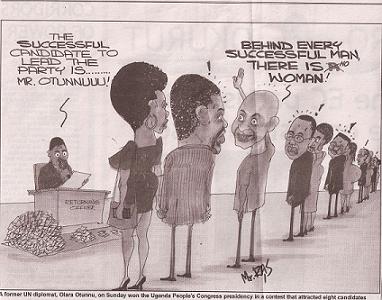 The subtitle to the cartoon reads, “A former UN diplomat, Olara Otunnu, on Sunday won the Uganda People’s Congress presidency in a contest that attracted eight candidate.” That’s the news, but I doubt that was the only message. In January, the UPC went on record as being opposed to the Anti-Homosexuality Bill. Their leader is single. Get it?

According to Ford and Carter administrations official and frequent visitor to Uganda, Bob Hunter, many Ugandans suspect that a single man over the age of 30 could be a homosexual. Hunter emerged as the spokesperson for the Fellowship Foundation on Uganda when it was disclosed last year that the sponsor of the Anti-Homosexuality Bill, David Bahati, had been closely involved with a parliamentary prayer groups associated with the Fellowship Foundation. The Fellowship Foundation, via Hunter and spiritual leader Doug Coe, strongly denounced the bill and expressed hope for it to be withdrawn. Hunter recently returned from a trip to Uganda where he expressed the Fellowship’s opposition to Ugandan leaders as well as conducted mission work in northern Uganda.

Hunter told me that the March 16 cartoon in the government sponsored paper, New Vision, raises the possibility that the NRM plans to make Otunnu’s singleness an election issue. Speaking directly about the Anti-Homosexuality Bill, Hunter said, “Some there believe that focusing attention on homosexuality might be a way to indirectly cast aspersions on Otunnu.”

No one can be sure of course. However, suggestions of homosexuality might help weaken a candidate in Uganda, especially during a period of debate over a law that seeks to eliminate it from the nation.